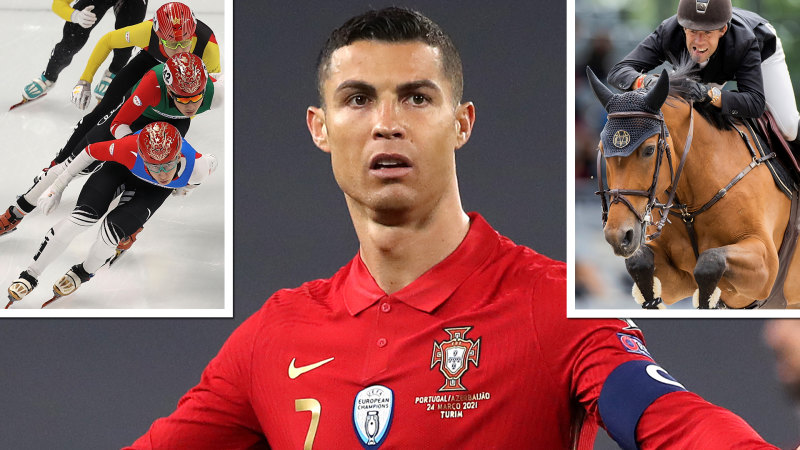 What an unholy mess. The torrent of opprobrium spewed forth over the announcement of a mooted breakaway European football competition was not astonishing. Nor is the fact that Super League 2.0 has been rendered a rumbling mess, for now.

It’s hardly a stretch to surmise that this new nirvana competition, involving a dozen of Europe’s behemoth clubs, was nothing more than a self-serving cash grab; an almighty spit in the face of football lovers the world over. Of course clubs would prefer to avoid the inherent and perennial uncertainties of having to actually qualify for the Champions League and the riches it brings. Of course earning 10 times the riches, without the risk, is an apple too good to leave on the tree. 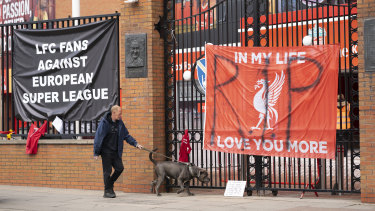 Banners outside Liverpool’s Anfield Stadium after the collapse of English involvement in the proposed European Super League.Credit:AP

Could UEFA and FIFA actually ban Messi and co from the World Cup? Not if European competition laws are fearlessly applied. In a sense, UEFA’s strategy was “Super League Reactionary, 101”. Kneejerk and intimidatory; but it likely won’t fly up the flagpole.

In 1978, and after 32 hearing days in the Chancery Division of England’s High Court, it was adjudged that rules introduced by cricket’s international governing body, the International Cricket Conference (as it was then known), to ban players who took part in Kerry Packer’s World Series Cricket constituted a “most serious imposition on the the freedom of a player exercising an available choice to contract, with whom and where he will”.

The court decided the ICC couldn’t prove any justification defence that the restraints in its rules were reasonable and proportionate.

Similar strategies were imposed in the mid-1990s during one of the first scrimmages at the start of rugby league’s own, so-called Super League war. The likes of Laurie Daley, Brad Clyde and Ricky Stuart – all Canberra players, aligned with the rebel Murdoch-backed competition – took litigious umbrage with the latent introduction of rules, obviously intended to ensure each of them would be excluded from selection in national and other representative teams.

In that case, the NSW Industrial Relations Commission determined, in answer to the players’ petition, that those rules were “wholly void” from the start. Again, it was a restraint of the players’ trade with no reasonable justification.

In January this year, the Nuremberg Court of Appeal in Germany upheld a lower court decision in relation to the sport of “non-Hulk Hogan style” wrestling, involving the German national governing body and the international federation expelling several wrestlers for taking part in a rival, “maverick league”.

A similar decision was handed down in 2015 by the Brussels Court of Appeal, in relation to a rule preventing equestrians from riding in federation-sanctioned showjumping competitions, if they’d participated in a “non-approved” event during the previous six months. No exceptions.

The decisions concerning the wrestlers and the riders (and their horses) applied the Treaty on the Functioning of the European Union, and especially the TFEU’s rules on competition. Article 101 of the TFEU prohibits and voids various types of agreements, decisions and concerted practices which prevent, restrict or distort competition within the European market. Article 102 outlaws the abuse of a dominant market position. 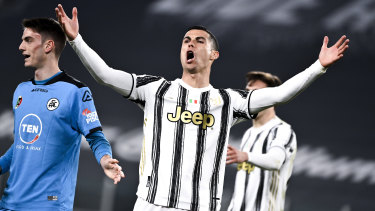 Banning the likes of Cristiano Ronaldo from international football would be open to legal challenge.Credit:LaPresse

The key, though, is the following judgment. In December 2020, the EU’s General Court – which is a superior jurisdiction, of significant precedent value – handed down a decision that might scupper any future strategies of UEFA and FIFA.

The General Court was asked to judge whether the rules of an international sports federation were in compliance with EU competition law. That judgment concerned the International Skating Union – the federation for speed skating and figure skating, as recognised by the IOC – and the ISU’s eligibility rules and “pre-authorisation system”. The system allowed the federation to impose multi-year and even lifetime bans on athletes who participated in unauthorised competitions.

This history behind the challenge to ISU’s policy structure is that in 2014, a South Korean company tried to organise a speed-skating competition in the United Arab Emirates, involving new formats. The ISU hadn’t authorised the competition, and as a consequence the organiser was forced to abandon it, because the athletes wouldn’t participate due to fears of the ISU exerting its wrath. The Koreans had dared to compete with the ISU’s commercial activities.

But two Dutch professional skaters complained to the European Commission, which began an investigation. It led to a 2017 ruling that the ISU’s rules offended European competition laws. Chagrined and bullish, the ISU appealed to the EU General Court.

The judgment of the court is telling. It found the ISU was materially conflicted in its interests, in that it possessed and discharged both a regulatory and a disciplining function, but it also organised its own events for commercial purposes. In that sense, a South Korean organisation holding events in the UAE was a clear competitor and threat to the ISU.

The court decided that the ISU’s rules had the effect of preventing athletes from freely participating in third-party international competitions. It also decided that the ISU, in its market-dominant position, had an unshiftable responsibility to ensure third-party competitors were not unfairly deprived of opportunities to access the market for professional athletes, to such an extent that competition in the market is distorted.

So to where I began: the magnificence of the opprobrium in response to the European Super League isn’t surprising. Not by any stretch.

But any attempts by FIFA and UEFA to ban players from representative football – should they be caught up in the maelstrom which will continue to whirl uncontrollably over the coming months, regardless as to what happens in the coming days – might lead to a legal armageddon the likes of which sport has never seen before.

And it’s a war that those governing bodies might well lose, if precedent is the guiding light during what might become Stygian days and months.