There was once a time when Manchester United supporters would scoff at the very notion that Manchester City could become their equals, let alone outclass them.

But that’s precisely what happened in Sunday’s derby at the Etihad Stadium, where the 3-1 scoreline really didn’t go far enough in reflecting City’s dominance.

It was a match bookended by two moments that underlined just how wide the gap in quality between City and United has become in the last couple of years. 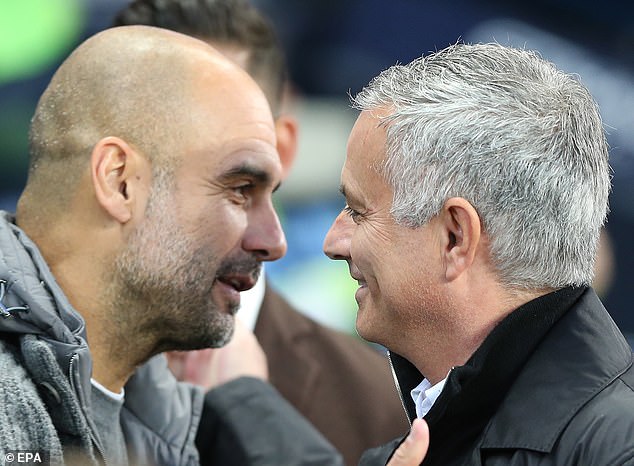 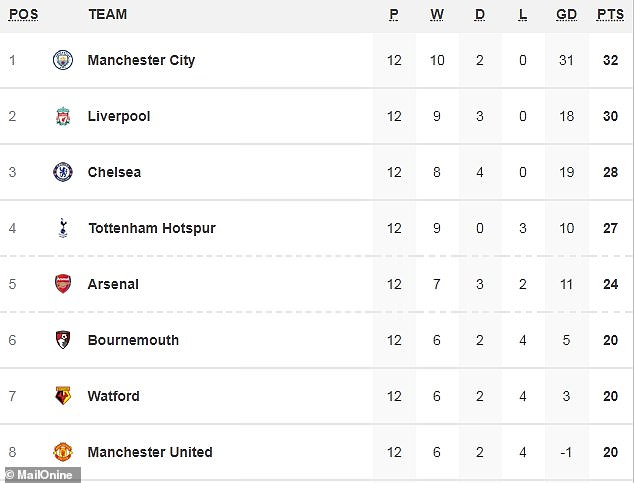 The opening 12 minutes, prior to David Silva’s opening goal, saw City enjoy 91 per cent possession and United attempt just 11 passes, of which only five were successful.

And then there was Ilkay Gundogan’s 86th-minute clincher, the culmination of a superb 44-pass move that involved all 10 outfield players.

Even if Anthony Martial’s penalty offered some hope for United, they were never deserving of anything out of the game, as City moved 12 points ahead of them in the Premier League table.

City are unquestionably superior to United in every department from back to front at the moment and we take a closer look at that gulf in class here. 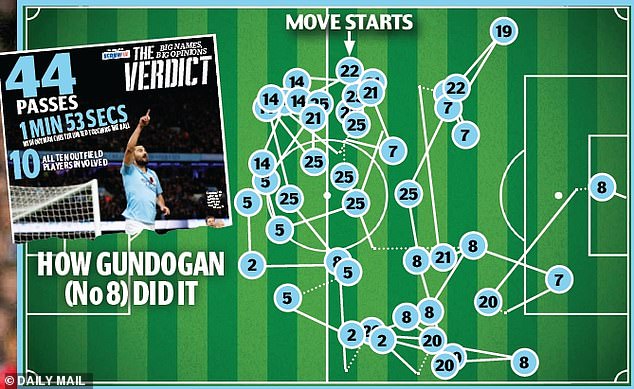 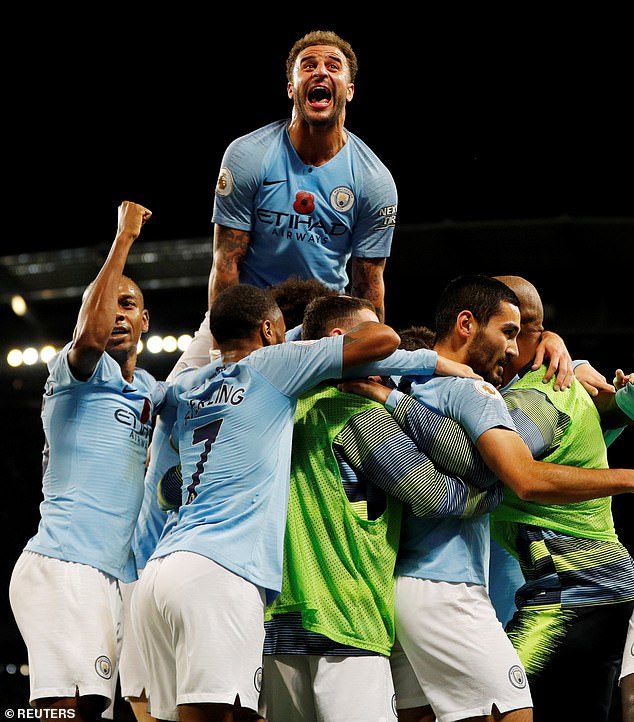 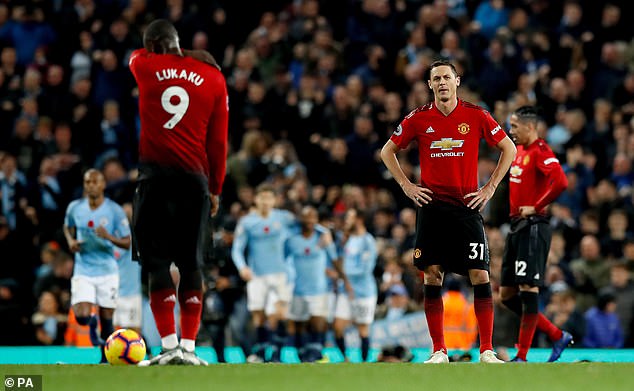 City: It wasn’t as though City were leaky defensively as they romped to the title last season – after all, they conceded just 27 goals, the lowest tally in the Premier League.

But Guardiola has managed to make them even more resolute this time around, with just five goals let in so far and seven clean sheets in their opening 12 matches.

Both those figures are identical to Liverpool, where Jurgen Klopp has overseen a similar mission to add solidity at the back.

John Stones and Aymeric Laporte are beginning to look like a central defensive partnership that will serve City for the next five years and upon that rock can be based City’s glorious attacking play. 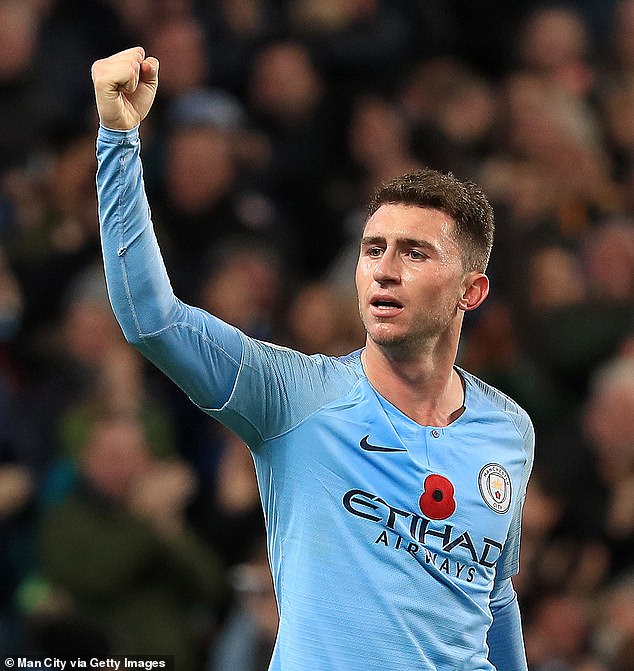 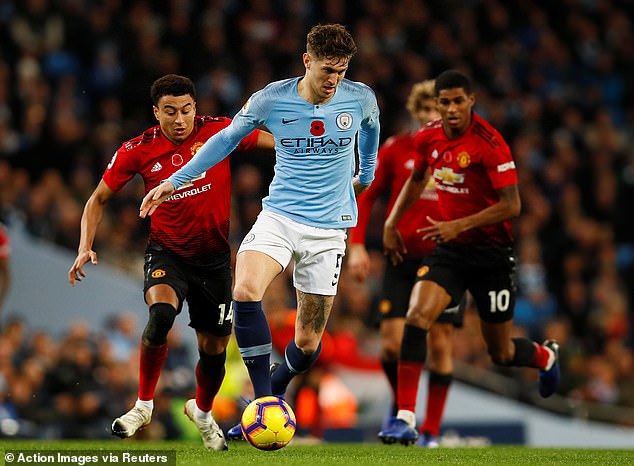 There have been wisecracks about how City’s expenditure on defence was greater than that of 52 countries, but they’re certainly feeling the benefit of the investment.

Last season, United came back from two goals down to win 3-2 in this same fixture, exploiting a shaky City back line that cracked under pressure.

There was absolutely no chance of that on Sunday, even after Martial had halved the deficit, with Stones and Laporte imperious, and Kyle Walker and Benjamin Mendy performing with good discipline on the flanks.

Amid all the mesmerising football his team’s play, it is very easy to overlook the fact that Guardiola knows how to organise a defence. There’s nothing gung-ho about their manner of playing.

In eight of his nine seasons in management, Guardiola’s team has had the best defensive record in the division. It looks likely to happen again this season. 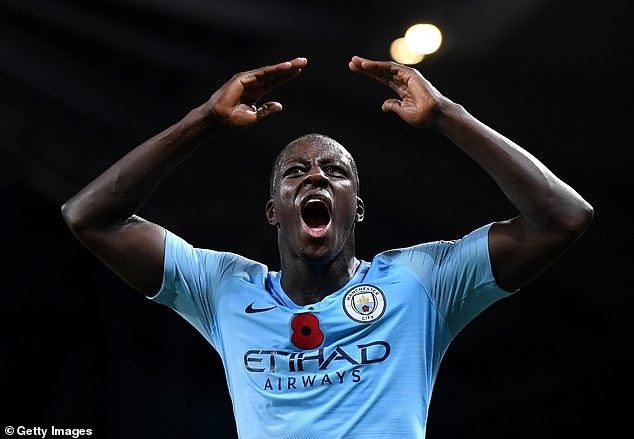 United: For a manager who prides himself on having the toughest defence, Jose Mourinho has really taken his eye off the ball this season – though it isn’t entirely his fault.

The United manager made very public appeals for investment in his back line over the summer, with Leicester City and England centre-half Harry Maguire the prime target, but wasn’t granted the funds.

That is now beginning to look like a mistake. It wasn’t too long ago that Mourinho could come away to a team like City and United could bore their way through to a goalless draw.

Now, their back line simply doesn’t inspire confidence. The fact they sit eighth in the Premier League table with a negative goal difference tells you everything you need to know.

United conceded just one more goal than City last season (28), but they have already let in 21 this season after 12 games. They’ve also kept just one clean sheet – only rock-bottom Fulham have kept fewer. 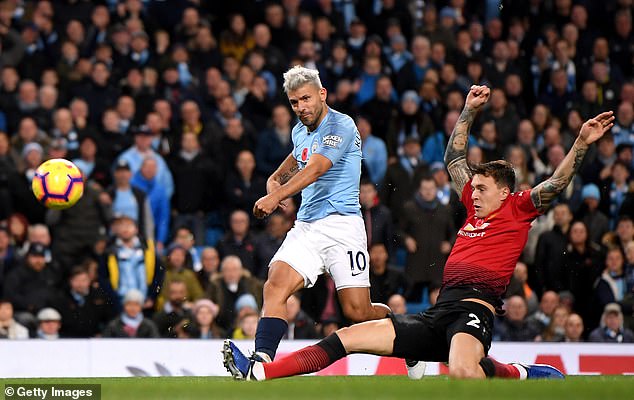 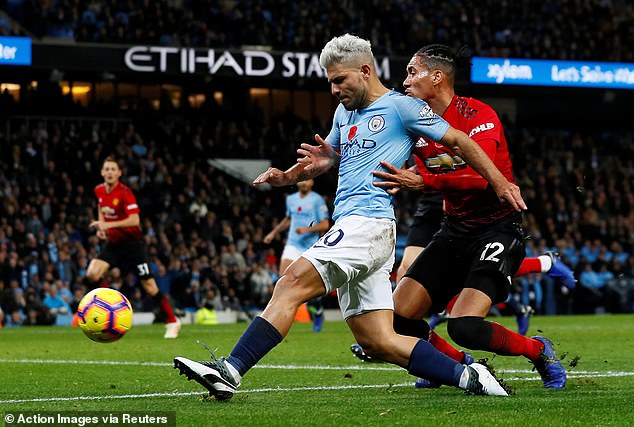 It is the first time in 41 years that United have had a negative goal difference after a dozen games.

It’s plainly obvious that Mourinho doesn’t trust any of his central defenders. He has chopped and changed his pairing all season because none of Victor Lindelof, Chris Smalling, Eric Bailly or Phil Jones offer assurances, while Marcos Rojo has been out injured.

If there was one thing you could guarantee about a Mourinho team, it was a rock-solid back four, but that reliability has been consigned to the past.

United were dragged out of position time after time by City, with Lindelof allowing Sergio Aguero to get goal-side of him for City’s second goal.

Luke Shaw has improved this season, a rare positive for United, but it’s increasingly apparent by the week that United may have to spend big on defensive reinforcements in January’s transfer window to rescue their season. 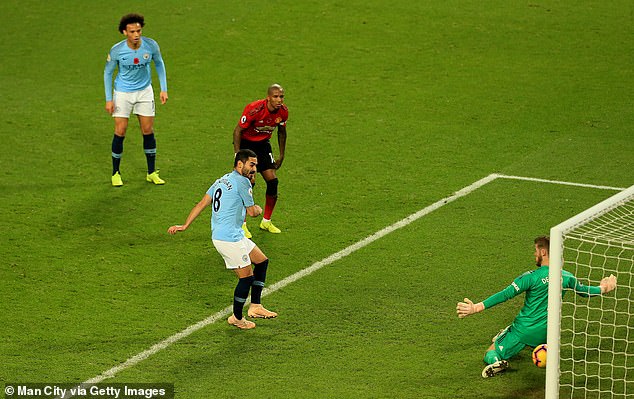 City: You only have to look at the possession stats and the way City toyed with United for their third goal – passing the ball around in a blur of purpose and intent – to see the gap in quality.

Indeed, it must be demoralising for the rest of the Premier League that City are playing to such high standards despite their best player, Kevin De Bruyne, being sidelined through injury.

In his absence, David Silva and Bernardo Silva have filled the creative void, while Fernandinho is among the best in the division when it comes to disrupting the opposition.

The Silvas were especially excellent on Sunday, rising to the occasion in a way that United’s midfielders simply did not. 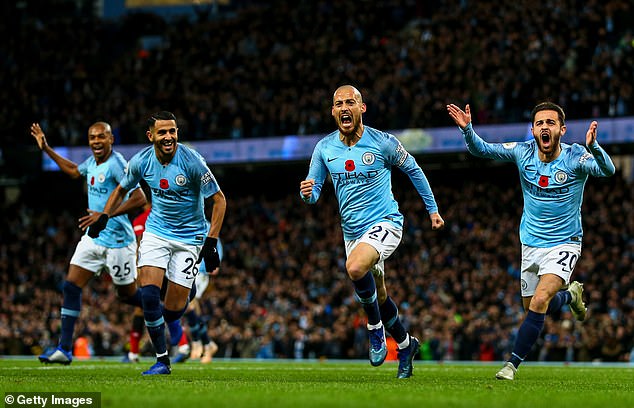 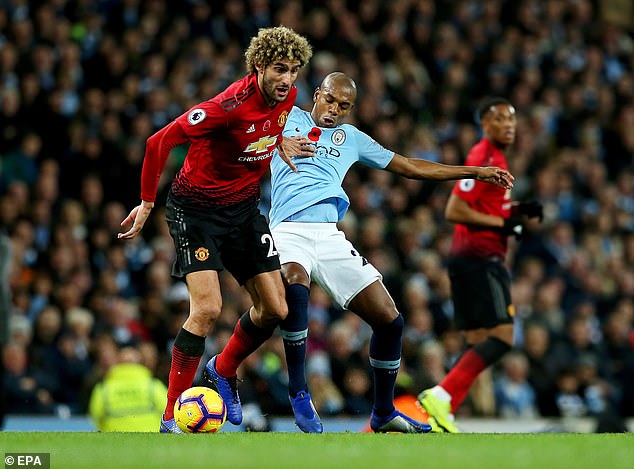 As well as maintaining a metronomic passing tempo, there are contributions in terms of goals and assists all the time from everyone.

David Silva has seven goals and three assists, while even Fernandinho has scored once and set up two goals during the course of the season.

When De Bruyne returns, the team will have yet more gears to run through and with the likes of Fabian Delph, Ilkay Gundogan and Phil Foden warming the bench at the moment, they have superb strength in depth in this area.

The fact City average 688.75 passes per game at an accuracy of 89 per cent really tells you everything you need to know. Only Chelsea pass with greater regularity and accuracy.

United: Mourinho went with three of his chief disruptors in Marouane Fellaini, Nemanja Matic and Ander Herrera on Sunday and neither covered themselves in glory.

Herrera was continuously caught in possession, Fellaini couldn’t offer a bridge between defence and attack, while Matic was at fault for the third goal after failing to pick Gundogan up.

They were chasing shadows at times and missed the dynamism that Paul Pogba, deemed by Mourinho as not fit enough to complete 90 minutes, can offer. 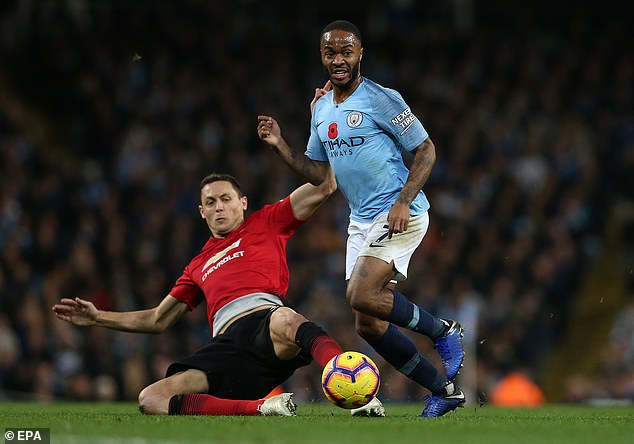 The feud between Mourinho and Pogba has dominated the start of United’s season and, while he continues to inspire and infuriate in equal measure, he does offer United a spark.

He was the man who inspired United’s unlikely comeback at the Etihad Stadium last season so not even to have him on the bench suggested he does have an injury.

Without him, United lacked the necessary invention to convert their rare spells of possession into something meaningful.

The Frenchman has been some way off his best this season, but nonetheless has five goals and four assists, while United’s other midfielder barely register. 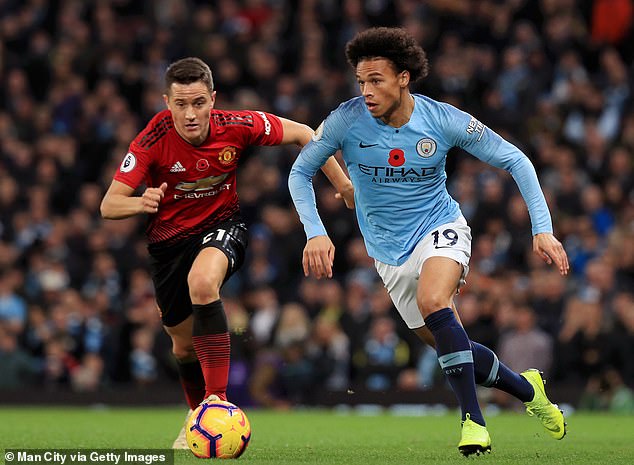 So City happily skirted around a United midfield set up to contain and, after conceding early, they weren’t the right players to offer any creativity either.

By contrast, City seem to have both bases amply covered.

City: It doesn’t take a genius to work out that City’s forward line is functioning at a far higher level that United’s.

Guardiola’s team have scored 36 times in the Premier League – nine more than next highest Chelsea – and have a goal different of +31, head and shoulders above everyone else.

City have also scored 12 goals in the Champions League and five in the EFL Cup. Across all competitions, they have averaged just under three goals a game. 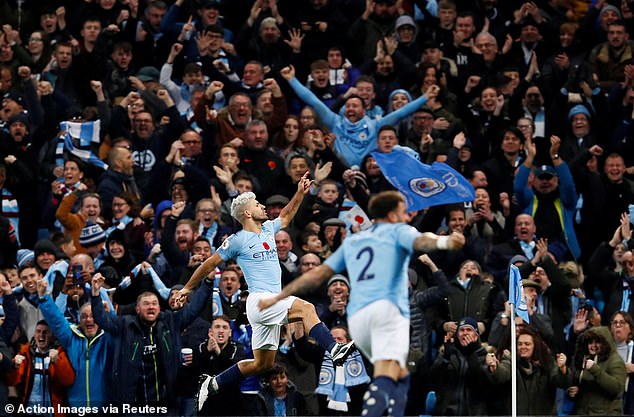 They swat lesser teams aside in the same way Sir Alex Ferguson’s United used to – 6-1 vs Huddersfield Town, 5-0 vs Cardiff City, 5-0 vs Burnley, 6-1 vs Southampton and 6-0 vs Shakhtar Donetsk.

It’s rare that City make heavy weather of those kind of matches and the spread of goals throughout the team is highly impressive.

Sergio Aguero has top scored this season with 11, while David Silva and Raheem Sterling have seven apiece. Riyad Mahrez has weighed in with six, while Gabriel Jesus and Bernardo Silva have five apiece.

As the 44-pass move to round off Sunday’s win showed, they’re not only scoring for fun, but scoring goals of incredible style as well.

Guardiola has created a well-oiled attacking machine and it seems to be getting better and better with every passing week. 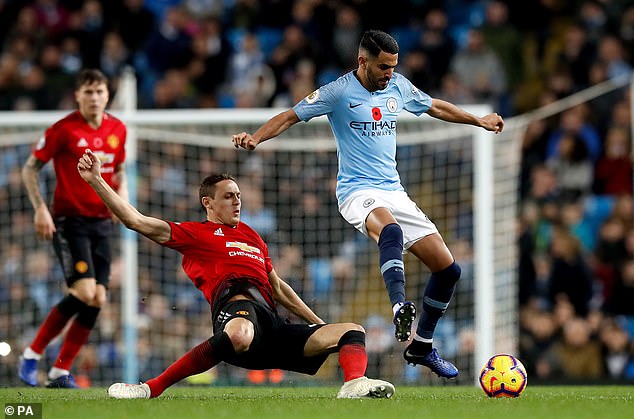 United: By contrast, United’s forward line appears to have malfunctioned. Just 20 goals scored in the league and seven in other competitions.

Their main striker, Romelu Lukaku has just four for the season (he had 11 at this point last season), hasn’t scored since September 15 and wasn’t deemed in form enough to start against City.

The fact he won a penalty just seconds after coming off the bench underlined that Lukaku remains vital to United’s cause but the Belgian’s goal drought suggests he is severely lacking in confidence. 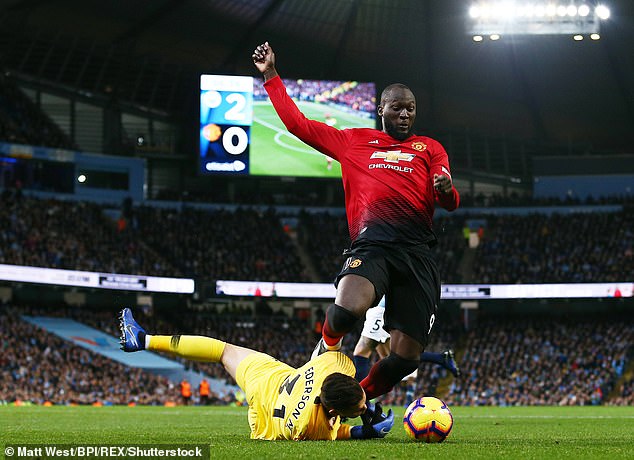 Only the goals of Anthony Martial have given United’s recent results a veneer of respectibility, with Marcus Rashford and Alexis Sanchez also struggling for form. Jesse Lingard is looking to find his best again after injury.

It adds up to a sorry picture in a United side that is weighted towards attack, with great sums spent on transfer fees and wages over the past few years.

At the moment, Martial looks like the only one capable of finding the net so it isn’t any wonder the goalscoring stats are down.

Combine that with a leaky defence and a general lack of form and confidence and United face an uphill struggle to even finish in the top four this season, let alone challenge for honours. 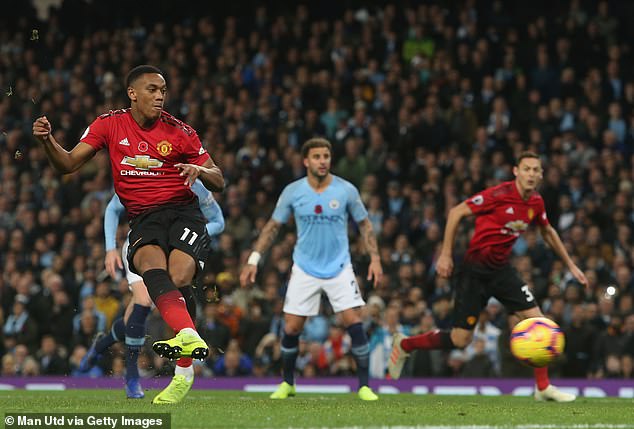 Anthony Martial, who converted the penalty, is the only United forward currently in good form