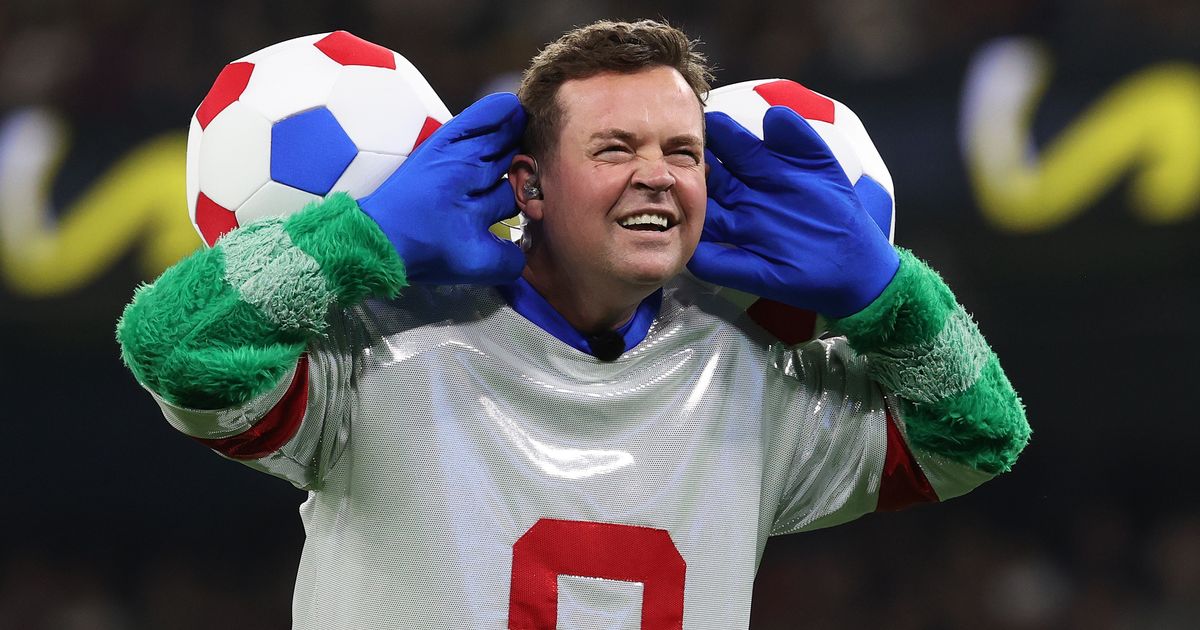 The mystery behind Soccer Aid's Masked Winger has been solved after Stephen Mulhern was revealed as the person behind the mask.

Dressed as a tasselled whistle throughout the run-up to the charity match between the England and the World XI teams, Mulhern left fans guessing as to who was behind the peculiar get-up.

The Masked Winger, a not-so-subtle play on ITV series The Masked Singer, appeared in several adverts and TV shows in the run-up to the match at the Etihad Stadium.

His identity was kept a closely guarded secret right up until kick-off at the start of the second half, when hosts Dermot O'Leary and Alex Scott finally revealed it was indeed Mulhern behind the mask.

The Catchphrase and In For A Penny host then took to the pitch wearing his oversized costume, causing havoc everywhere he went.

Almost immediately, he clattered into Manchester United and Scotland hero Darren Fletcher, leaving the 37-year-old flat on the deck.

And just over six minutes later, Mulhern's match was over as the man behind the mask was forcibly removed from the pitch.

Nevertheless, his appearance encapsulated the true spirit of Soccer Aid and was enjoyed by millions of fans watching on TV, some of whom took to social media after discovering The Masked Winger's true identity.

One watcher wrote: "Imagine being in the crowd at soccer aid expecting some superstar to pop up as the mascot and its Stephen Mulhern."

Someone else said: "Stephen mulhern been the best part of this match so far #SoccerAid."

A third Twitter user commented: "Stephen Mulhern getting thrown off the pitch is the highlight of the match so far #SoccerAid #socceraid2021 #StephenMulhern."

Another person added: "Darren Fletcher has gone from meeting Ronaldo at the airport on Thursday to being nailed by @StephenMulhern in a fancy dress costume.. what a week #socceraid2021."

"Bringing @StephenMulhern on for @socceraid was the best thing that could have ever happened," was the view of a fifth fan.

Despite Mulhern's attempt to disrupt the game, England couldn't stop the World XI from running away with their fifth Soccer Aid victory.