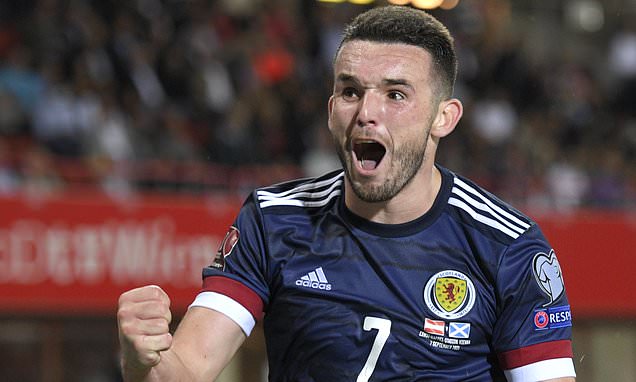 STEPHEN McGOWAN: Scotland revived their 2022 World Cup qualification hopes with a win against the odds in Austria and now their destiny is in their own hands

On the banks of the Danube Steve Clarke’s Scotland reached for a life vest, took a deep breath and swam for dear life.

Make no mistake. Anything less than a point in Vienna and any realistic hope of reaching the World Cup finals in Qatar next year was gone.

Thanks to a Lyndon Dykes penalty awarded after a VAR consultation after half an hour they took all three. Now second in Group F another huge game against Israel looms in Glasgow. Beat a weary old familiar foe before a packed Hampden on October 9 and a second place play-off becomes tantalisingly achievable. 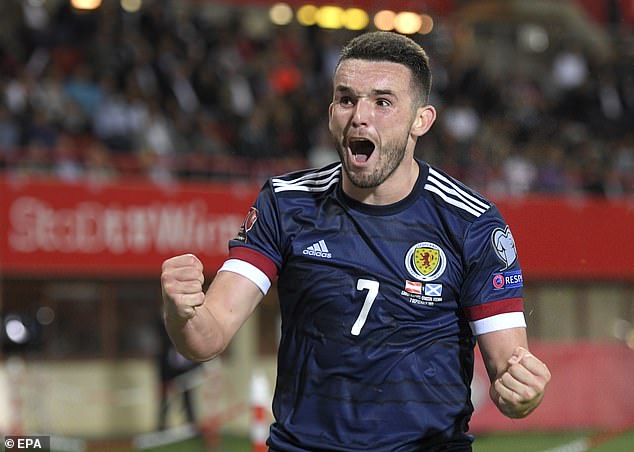 Every successful qualification campaign needs a big bold statement away from home. A win against the odds. Austria had never lost consecutive home World Cup qualifiers. But they had failed to score in their last two home games against Denmark – a 4-0 thrashing – and Slovakia. Vulnerable and weak after a 5-2 thrashing in Tel Aviv at the weekend the boos around the Ernst Happel Stadium at full-time told their own story.

The appeals of Real Madrid left-back David Alaba to an irate fan base made no difference. Coah Franco Foda will pay a heavy price for sliding to crippling back to back defeats when he loses his job. In stark contrast that new contract for Steve Clarke no longer feels like such a rash and hasty call from the SFA.

The Austrians were a well-beaten, clueless bunch by the end. Only once did they force Craig Gordon into a save of note. In defence Scotland were disciplined and organised. In midfield Billy Gilmour, Callum McGregor and John McGinn were superb. After all the fretting over the strikers, meanwhile, Dykes has now claimed two huge goals in two games. In hindsight he could have had more. 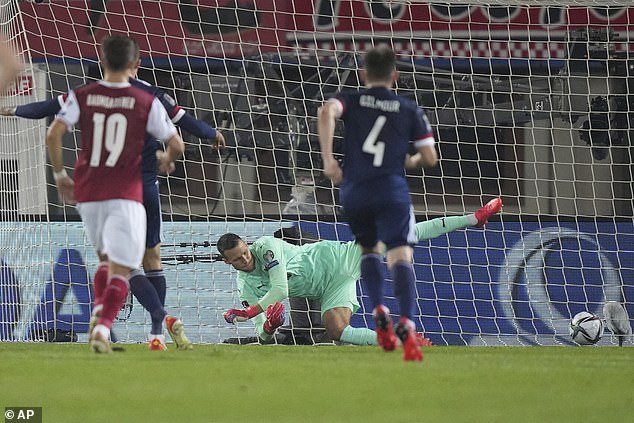 A blistering start from Austria was a mirage in the end. Dykes had his first chance to open the scoring after nine minutes when Che Adams pinched the ball from David Alaba 30 yards from goal.

Andrew Robertson picked out John McGinn’s run and when the Aston Villa man hung a cross in the air for Dykes the striker’s downward header was just too close to former Kilmarnock keeper Daniel Bachmann who dived low to save.

The chance exposed Austria’s achilles heel. A porous defence brutally exposed in Israel on Saturday, the home team were there for the taking. Whether Scotland could take advantage was another matter.

As so often in Steve Clarke’s reign a penalty kick provided the answer. When Adams was wrestled to the ground by Martin Hinteregger after 28 minutes the lack of a claim from the Scots was a strange affair. Replays showed a clear penalty and, after an inexplicable delay, the Video Assistant Referee agreed. 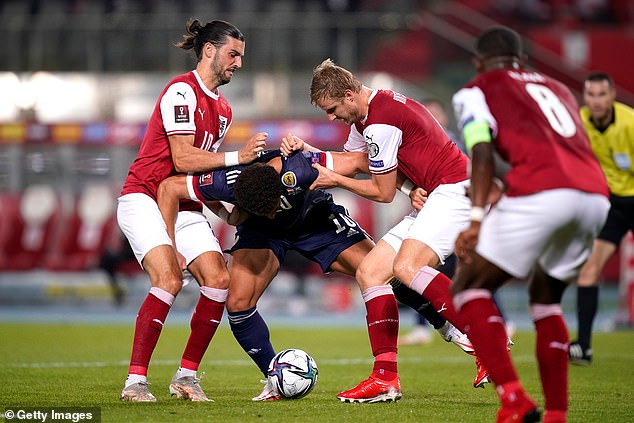 Bulgarian Georgi Babakov was encouraged to view the pitchside monitor on the halfway line. There could only be one outcome.

After an interminable wait of two minutes and Austrian gamesmanship Dykes stepped up to ram the penalty into dangerously close to Bachmann in goal. The power beat Austria’s keeper and Scotland had the lead, the Queens Park Rangers striker claiming his second Scotland goal in two games – his twelfth in 16 games for club and country.

Austrian protests were misplaced and over-looked a clear let off for the home nation.

Minutes earlier Hinteregger was fortunate to escape with a booking for a shocking clattering challenge on Callum McGregor on the halfway line. For wrestling Adams to the ground as the striker tried to make space for a shot he could have gone. 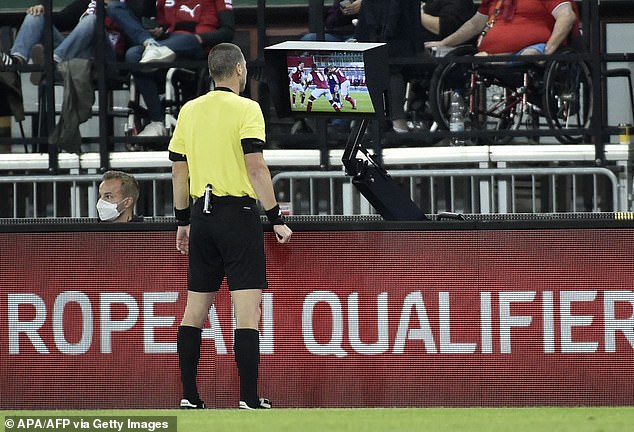 The raucous mood of the Austrian fans was now replaced by sullen silence. In a corner of the Ernst Happel Stadium a small group of Tartan Army diehards made themselves heard. Scotland had found their voice.

There was some relief before half-time when Stephen O’Donnell – playing his first game since August 8 – was caught under a looping cross in the penalty area, the ball striking his arm. There was no case to answer this time and the frustration of Austria players was in danger of spilling over. They knew what was at stake.

The pressure on coach Franco Foda was now immense. Without Sasa Kalajdzic – the scorer of both Austrian goals in a 2-2 draw at Hampden in March – plus key men Julian Baumgartlinger of Bayer Leverkusen, Bayern Munich playmaker Marcel Sabitzer and midfielder Xaver Schlager the German now needed the half-time team talk of his life just to save his job. His players had to turn up.

At times the desperation spilled over into crudity. Arnautovic was a lucky man to escape punishment for a ridiculous shoulder charge into the head of Billy Gilmour. Inexplicably VAR failed to even look at it. For the second time in the game the home nation had ducked a red card. 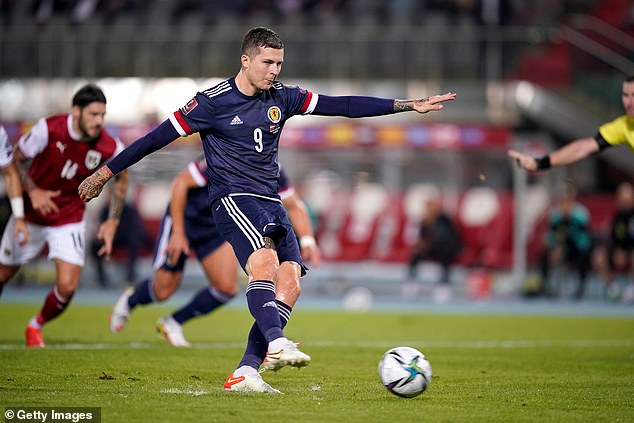 Grant Hanley indulged in a few rough house tactics of his own when he was booked for shoving in the penalty area at an Austrian corner. The ball was out of play, meaning no further punishment. That’s unless you count Hanley, who now misses the next qualifier against Israel

Penned deep in their own half the Scots failed to take advantage of an embarassing let off for Daniel Bachmann after an hour. In his own area with the ball at his feet under pressure from Che Adams the keeper kicked the turf instead of the ball. Bachmann in a terrible fankle, Adams nicked the ball but the move fizzled out. Not or the first time Austria looked a bag of nerves.

A second goal for Scotland would have killed it and it so nearly came after 68 minutes. A brilliant piece of skill from Billy Gilmour fed Adams with his back to goal. Spotting Stephen O’Donnell galloping into space the Motherwell skipper had time and space to smash a low shot towards the far corner. Bachmann threw himself low to save with one hand, keeping Austria in the game.

In the pre-match press conference Steve Clarke had called on his players to keep their nerve. John McGinn clearly wasn’t listening, curling a superb shooting chance wildly over the bar moments later. 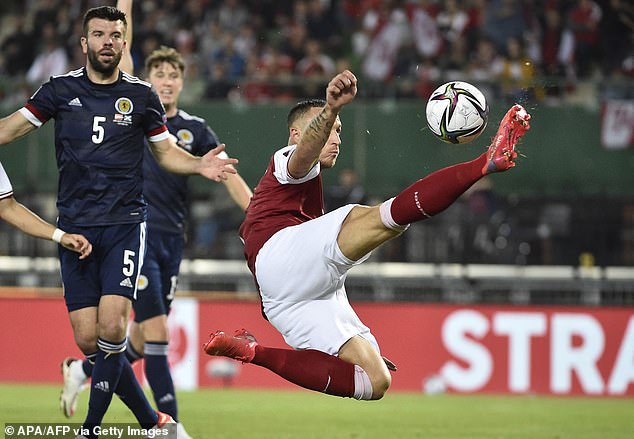 Marko Arnautovic led the line for Austria but, despite his acrobatic efforts, could not score

After precious little football O’Donnell’s lung-bursting run was a bridge too far. With 13 minutes to play the wave went out to the bench and Paul McGinn – brother of midfielder John – trotted on for for first Scotland appearance at right wing-back.

Scotland were deep now. Too deep for comfort. For the first time all night Craig Gordon was called on to make an outstanding save when Christoph Baumgartner got on the end of Alaba’s outswinging corner, a point blank effort producing an instinct stop of the highest order.

The late nerves should have evaporated seconds later. Sent scurring clear on the right flank Che Adams should have spotted Ryan Christie bursting a lung to find space in the middle. A poor piece of decision making saw Adams drag a low shot wide of the post instead.

A late scare was inevitable, but no great shakes. When Baungartner hooked the ball into the net in the 91st minute he knew – as everyone did – that he was yards offside. Austria had breathed their last in the game and the campaign in general.