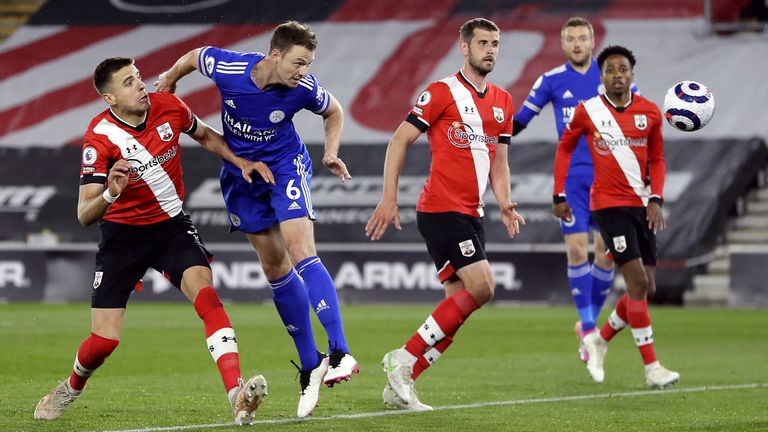 Report as James Ward-Prowse’s penalty is cancelled out by Jonny Evans to earn Leicester a point at Southampton, who had Jannik Vestergaard sent off early on in controversial circumstances 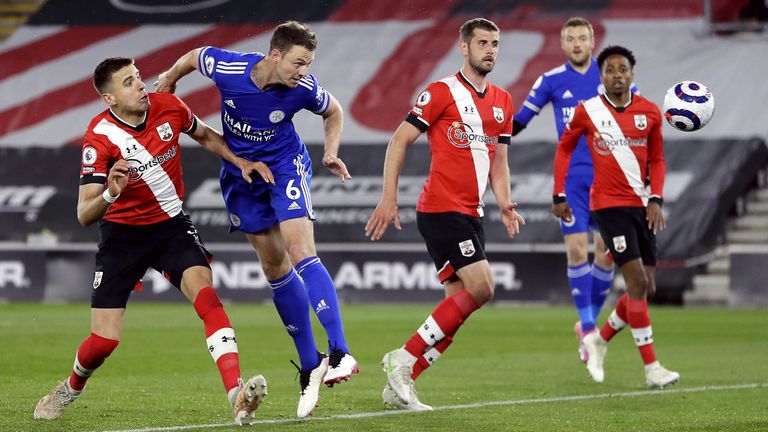 The hosts may have been fearing a repeat of last season’s 9-0 thrashing after Jannik Vestergaard was shown a contentious early red card for denying Jamie Vardy a clear goalscoring opportunity.

But, after limiting Leicester and the Premier League’s man of the moment Kelechi Iheanacho to some sporadic half-chances, out-of-form Southampton instead took the lead after an hour when Iheanacho’s handball allowed James Ward-Prowse to step up and beat Kasper Schmeichel from 12 yards.

The Saints’ lead lasted only seven minutes as Iheanacho redeemed himself by finding Evans with a cross from the corner of the area, which was powered home by the experienced centre-back. 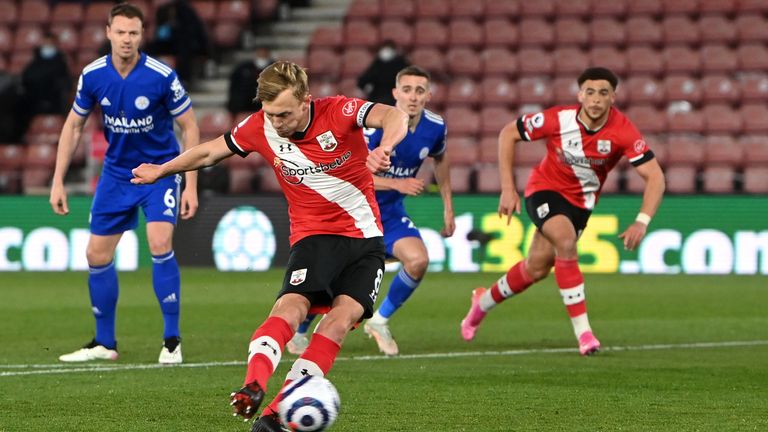 Vardy was denied by Southampton ‘keeper Alex McCarthy late on when he should have earned another comeback win for Leicester, who instead missed the chance to move 10 points clear of fifth place and could now see their cushion inside the Champions League spots cut by West Ham and Chelsea later this weekend.

A game which offered up nine goals in this fixture last season showed no early signs of following suit with Nathan Tella’s tame effort the only goalmouth action either side enjoyed in the opening stages.

One concerning parallel for Southampton would follow shortly after, with the hosts again reduced to 10 men after Rob Jones controversially showed a straight red card to Vestergaard for denying Vardy a clear goalscoring opportunity, despite television replays showing the defender had won the ball before making any contact.

But James Maddison’s subsequent free-kick, whipped just wide from 20 yards, proved about as much significant pressure as Leicester could mount on the 10-man hosts before the break.

Brendan Rodgers added Ayoze Perez as another attacking option for the second half but Southampton continued to hold firm, and took the lead on the hour mark after Armstrong’s shot hit Iheanacho’s arm, and Ward-Prowse beat Schmeichel from 12 yards.

An improbable victory was snatched away long before full-time as just seven minutes later Iheanacho’s cross from the right was met with a firm Evans header, leaving McCarthy with little chance from six yards and bringing Leicester level.

In the final 10 minutes Vardy should have completed the turnaround when outpacing Walker-Peters to the ball and then turning inside him to shoot, but in going for power was denied by a sprawling McCarthy, before Ndidi wasted the visitors’ last chance of note by firing wide when unmarked from 20 yards.

Southampton move a point closer to securing their survival but are already now 10 clear of 18th-placed Fulham, while Leicester may still require another eight points from their final four games to be certain of a top-four finish.

Leicester will be part of Friday Night Football for the second weekend in a row as they host Newcastle on May 7, live on Sky Sports Premier League from 7.30pm; Kick-off at 8pm.