Brentford dumped Premier League Southampton out of the Carabao Cup with a surprise 2-0 victory at St Mary’s.

The Sky Bet Championship club’s plans for the second-round tie had been considerably disrupted by an unnamed player testing positive for Covid-19 following a B team fixture on Monday.

With some squad members forced to self-isolate due to government guidelines, Bees boss Thomas Frank made six changes for the south-coast clash and was only able to name five of the seven permitted substitutes.

Those available to Frank responded in style as Norgaard headed home in the 40th minute and Dasilva soon slotted in a second at the end of a well-worked move.

Both clubs began their respective league campaigns with disappointing 1-0 away defeats.

More on this story

The hosts struggled to find the fluidity Hasenhuttl craved all evening and could have few complaints about the result.

Last season’s Championship play-off finalists began in the ascendancy and, after an error from onrushing Saints goalkeeper Alex McCarthy, Jack Stephens had to be alert to clear Bryan Mbeumo’s lofted effort off the line inside 10 minutes. 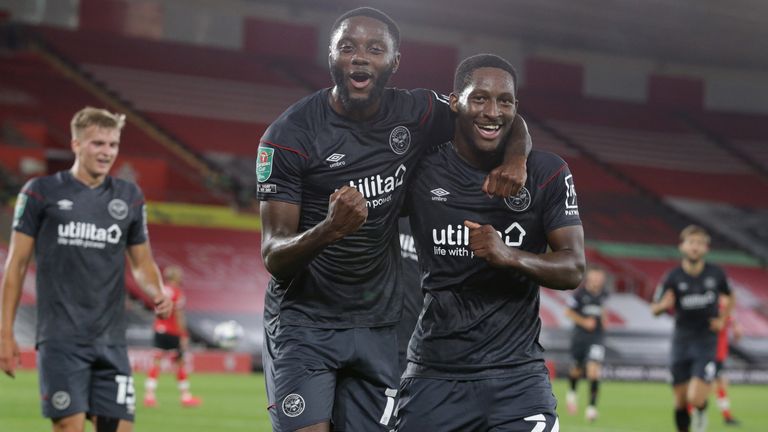 Che Adams squandered the hosts’ best opportunities of the opening 45 minutes. The unmarked former Birmingham forward looked nailed on to open the scoring seven minutes before the break only to fire against the base of the right post via a deflection.

Below-par Saints were soon made to rue that miss as the visitors reaped the rewards of their positive play by striking twice in seven minutes.

Denmark international Norgaard escaped the attention of the home side’s defence to emphatically head in his first Brentford goal from Mbeumo’s 40th-minute corner.

The Bees quickly doubled the advantage as England U21 midfielder Dasilva sidefooted home from the edge of the box following Shandon Baptiste’s cutback in first-half stoppage time.

Southampton, two-time finalists in this competition, desperately needed a way back into the contest.

Centre-back Stephens almost provided it just after the hour mark when his looping header was superbly tipped over by Brentford keeper Luke Daniels.

Hasenhuttl was visibly frustrated on the touchline for much of the evening and threw on attacking trio Moussa Djenepo, Shane Long and Michael Obafemi in search of a second-half fightback.

But Brentford, who had never lost on their previous three visits to St Mary’s, were rarely threatened and comfortably held on for a fully merited scalp.