The Socceroos will be banking on a form of home ground advantage at November’s World Cup, with the COVID-19 pandemic and a fluke of the draw giving coach Graham Arnold reason for confidence in Qatar.

Football Australia chief executive James Johnson, meanwhile, has also confirmed Australia is in the hunt to host the next Asian Cup and, possibly, a men’s World Cup next decade.

The Socceroos will play their last match on home soil before the 2022 World Cup against New Zealand on September 22 at Suncorp Stadium in Brisbane.

Three days later, the teams will meet again at Auckland’s Eden Park in a two-match series commemorating the centenary of the Socceroos’ and All Whites’ first matches, played against each other, in 1922.

“I think with that short turnaround, I will probably nearly use two different teams,” Arnold said.

“That gives everyone a good chance then to show me what they’ve got and whether they are ready to go.” 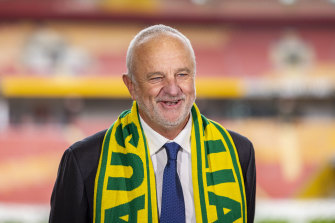 The two matches will the Socceroos’ only hitouts before Qatar, Arnold said, as the November international window would not afford them the opportunity for another pre-World Cup friendly.

Players were expected to be released from their clubs and arrive in Doha only a week before the competition starts.

Instead, Arnold will depend on training sessions ahead of the opening match against the reigning World Cup champions, France.

But Arnold said the Socceroos already had one big advantage over their group rivals, which also include Tunisia and Denmark.

When the COVID-19 pandemic closed borders and disrupted the World Cup qualifying process, Arnold made the call to play “home” matches in Doha.

The Socceroos’ final qualifier, in which they defeated Peru on penalties to secure their berth in a fifth-straight World Cup, was also held in Qatar.

“I do feel that that gave us an advantage against Peru because Peru hadn’t played there before — air-conditioned stadium, the pitches are lightning quick,” he said.

“We’d had four games there and won all four games. The boys are extremely happy there, so for us to go into that game against France … we know what it’s like and so it’ll be good for us, an advantage.”

Another benefit, Arnold said, is that all the Socceroos’ group matches will be played at the same ground, the Al Janoub Stadium at Al Wakrah, south of Doha. 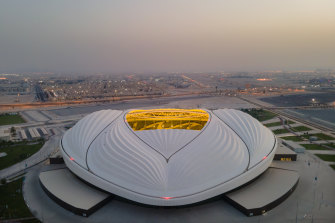 Johnson said a similar joint bid could help exorcise the demons of 2010, when Australia received just one vote during the controversial bidding process that saw the showpiece event awarded to Qatar.

“I think we’ve got to look at us as a region and yes, absolutely with New Zealand, but also we’ve got a lot of eyeballs and a lot of growth in south-east Asia as well, so I think we need to explore both,” he said.

More immediate, Johnson said, was Australia’s expression of interest to host the 2023 Asian Cup, after hosts China pulled out due to that nation’s zero-COVID policy.

“The important thing for us is when the competition is going to be played,” Johnson said.

“That just doesn’t work for us because we’re hosting the women’s World Cup around the same time, so we are talking to AFC about whether or not they would be open to a January or February 2024.

“If that’s a possibility, then it’s something that we would explore in a meaningful way.”