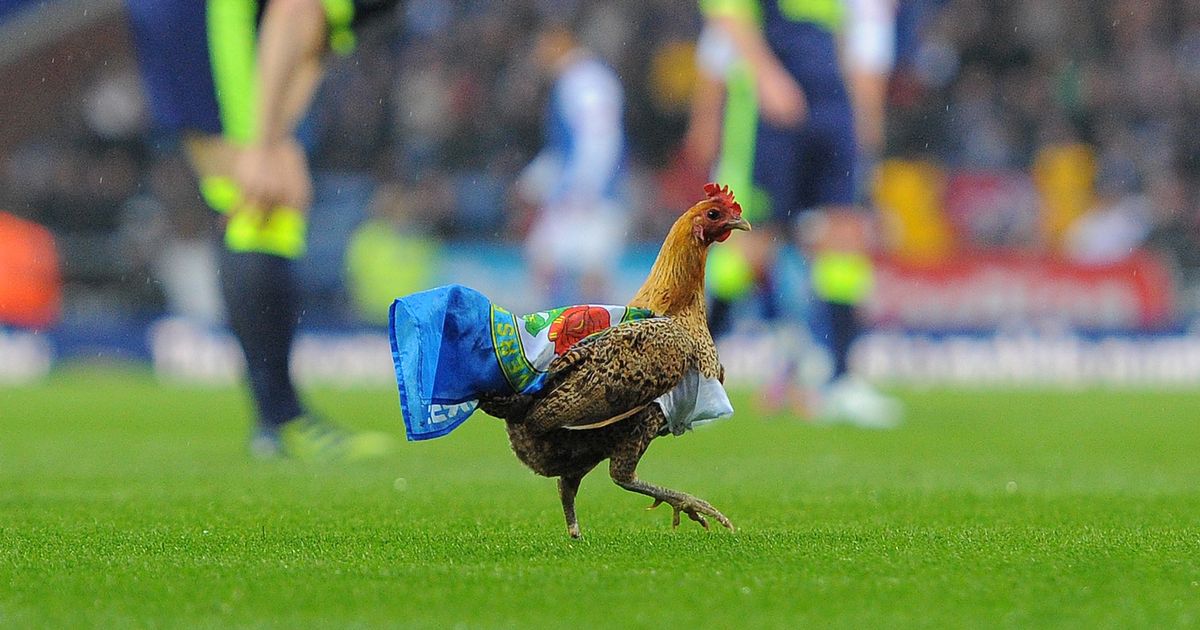 Manchester United fans joined the growing unrest among English football supporters on Sunday with a series of fan-led protests causing the club’s match against Liverpool to be postponed.

Thousands of fans marched on Old Trafford for a scheduled demonstration against the Glazer family’s ownership of the club in the wake of the European Super League project.

The protests were largely confined to outside the stadium, but some fans did manage to sneak their way inside the Theatre of Dreams and make their feelings known on the pitch.

In the wake of an extraordinary afternoon at Old Trafford, Daily Star Sport have looked at six more of the best protests in world football.

Know the best way to protest against your owners if they happen to run a firm specialising in poultry? Just release a chicken onto the pitch.

Remarkably, that’s exactly what Blackburn Rovers fans did in May 2012 as the club faced Wigan in a match they couldn’t afford to lose.

The chicken, draped in a Blackburn flag, toddled across the Ewood Park surface as Blackburn were relegated under the Venky’s ownership.

If English football is the new kid on the block when it comes to mass fan-led protests, then our German counterparts are old hands.

Back in 2016, Borussia Dortmund won 3-1 at Stuttgart in the German Cup, but it’s not the scoreline the quarter-final is remembered for.

Dortmund fans boycotted the first 20 minutes of the match and then lobbed hundreds of tennis balls onto the pitch in protest at ticket prices.

It’s not just football supporters who make their voices heard every once in a while, players do too.

And so it proved in 2013 as stars in Brazil’s top-flight staged a sit in pitch protest in opposition to the fixture congestion.

“We’re doing this to highlight how the national team will suffer in the World Cup,” explained a ‘Common Sense FC’ spokesman

Given Brazil’s embarrassing exit from the World Cup 12 months later, maybe he had a point.

Long before the European Super League came along, FSG decided to increase ticket prices in the Main Stand at Anfield to £77.

Reds fans were not having any of it and staged a 77th minute walk-out against Sunderland to get their anger across.

Figo and the pig’s head

Unsurprisingly, the switch did not go down particularly well with irate Barca fans who labelled Figo a traitor.

One supporter took matters into his own hands, launching a pig’s head at Figo as he went to take a corner on his second return to Camp Nou in 2002.

Ever played football in the garden and booted the ball over a neighbour’s fence? Let’s face it, we’ve all been there.

So, we have great sympathy with the women in south west France who was so fed up with balls landing in her garden that she forced the suspension of a French amateur match by taking her deckchair and sitting in the centre circle.

Her protest worked a treat, with the game between Juillan III and Tarbes officially abandoned after a 45-minute stand-off.