Sam Kerr has been hailed as the “complete” player by Matildas coach Tony Gustavsson, who says his superstar captain fully deserves to claim the Ballon D’Or Feminin.

Kerr has been nominated for the highest individual prize in women’s football after a stellar season with Chelsea, having won the league and cup double as well as the FA WSL golden boot.

As well as Kerr, holder Alexia Putellas from Barcelona, three members of England’s Women’s Euro-winning team and five of Lyon’s Champions League-winning side are included among the 20 nominees for the prize.

Putellas won the Best FIFA Women’s Player of the Year prize ahead of Kerr in January but Gustavsson says he wouldn’t be surprised if Kerr walks away with the gong when it is presented in October.

“Her performances over the last two years have been fantastic, both for club and country,” Gustavsson said.

“I’ve said it so many times, sorry to say it again, but she gets so much credit for her goalscoring but I don’t think she gets enough credit for her defensive actions and the way she works for the team. 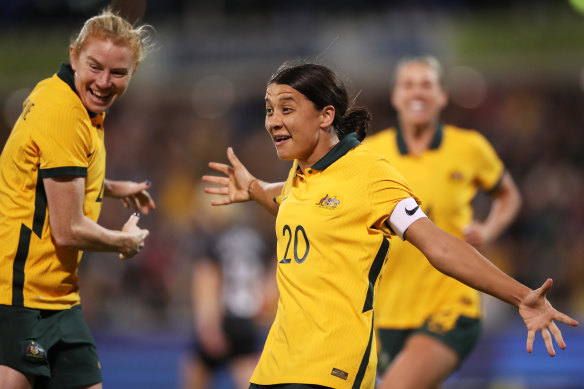 Sam Kerr is again among the frontrunners for football’s highest individual honour.Credit:Getty

“Just look at club and country how hard she works and off the ball as well. To have one of the world’s best goalscorers commit to defend the way she does and then her leadership skills as well and her winning mentality makes her complete as a player.

“It doesn’t mean she can’t get better because I know how hard she works every day to get better but in my opinion she’s been ready for that award for a long time.”

Kerr was on Thursday named in Gustavsson’s 23-player squad for friendlies against Olympic champions Canada in Brisbane and Sydney next month.

The 28-year-old is one of several key players back in Australia’s squad after being rested for June’s friendlies against Spain and Portugal along with experienced names such as Steph Catley, Caitlin Foord and Alanna Kennedy.

Overseas-based Matildas are expected to travel from their clubs in Europe and the United States later this month ahead of the two clashes with Canada on September 3 and 6.