Match report and free highlights as West Ham move up to eighth in the Premier League table thanks to Sebastien Haller’s rocket at Sheffield United; Blades remain winless and will have to make Premier League history if they are to avoid relegation

Haller fired in the only goal of the game 11 minutes into the second half, smashing the ball into the top corner from the edge of the area to send the Hammers up to eighth.

Goalkeepers Lukasz Fabianski and Aaron Ramsdale were called into action in both halves, while West Ham’s Declan Rice and Sheffield United’s Oli McBurnie were denied by the woodwork in a game with plenty of chances. But West Ham deserved their victory and heaped more misery on their hosts, who will have to make Premier League history if they are to avoid relegation after picking up just one point from a possible 27.

No side has failed to win any of their opening nine games and stayed up, leaving Chris Wilder’s rock-bottom Blades with a mountain to climb.

Man of the match: Angelo Ogbonna

Blades boss Wilder was unusually involved in his side’s pre-match warm-up, speaking to different groups of players, trying to pump them up ahead of kick-off, and they responded with a bright start.

George Baldock tested Fabianski in the third minute, latching on to a perfect John Egan ball and firing in a low effort from a tight angle, which the ‘keeper saved with his feet. 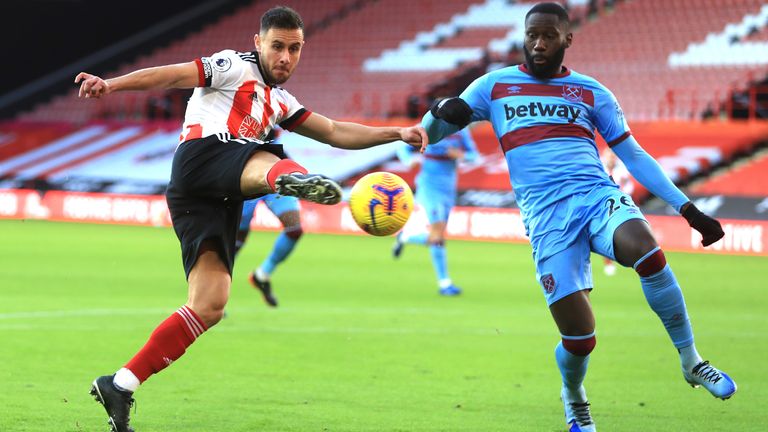 While the Hammers settled into the game and looked the more confident side, it was the Blades who manufactured the game’s second chance midway through the first half, but McBurnie was unable to direct his effort away from Fabianski as he punched his fierce strike away.

West Ham finally tested Ramsdale at the other end shortly before the half-hour mark. A neat and crisp move saw Jarrod Bowen tee up Vladimir Coufal in the box, only for his low effort to be met by the strong right hand of the Blades stopper.

The visitors should have led minutes later, only for Tomas Soucek to fluff his lines from close range. Haller’s knockdown left the Czech midfielder through on goal, but he could only shin his effort wide of the near post with just Ramsdale to beat.

David Moyes’ men were nearly made to pay for their profligacy before the break as the Blades bit back. The bright McBurnie used all his neck muscles to power a looping cross towards the top corner, only for Fabianski to spring to his left and push the ball away. David McGoldrick hit the post from the resulting corner but was correctly flagged for offside as he met the knockdown on the edge of the six-yard box.

The opening goal came in the 56th minute and it was worth the wait. Haller thumped the ball into the top corner after Pablo Fornals’ blocked shot fell straight into his path on the edge of the box. Ramsdale got a hand to the effort but it was too powerful to keep out. 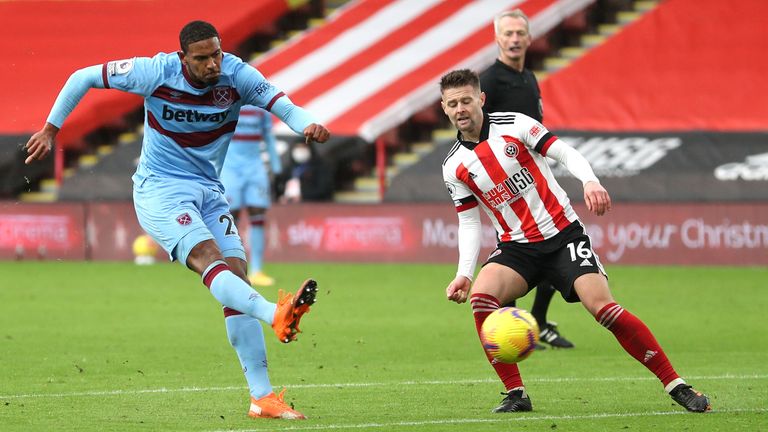 Haller should have added to his and West Ham’s tally. Arthur Masuaku’s low drive into the six-yard box was met by the striker at the front post, but he was unable to open up his foot and direct it on target, seeing it hit his heel and bounce wide. Declan Rice powered a header against the crossbar shortly afterwards as the Hammers were unable to make the final 15 minutes more comfortable.

Just moments after Rice hit the bar, Blades substitute Rhian Brewster sent strike-partner McBurnie through with a fantastic ball. While he was able to beat Fabianski, the Scotland striker saw his effort cannon off the underside of the bar and bounce harmlessly away from goal. His long wait for a goal continues – no player has had more shots without scoring in the Premier League this campaign. 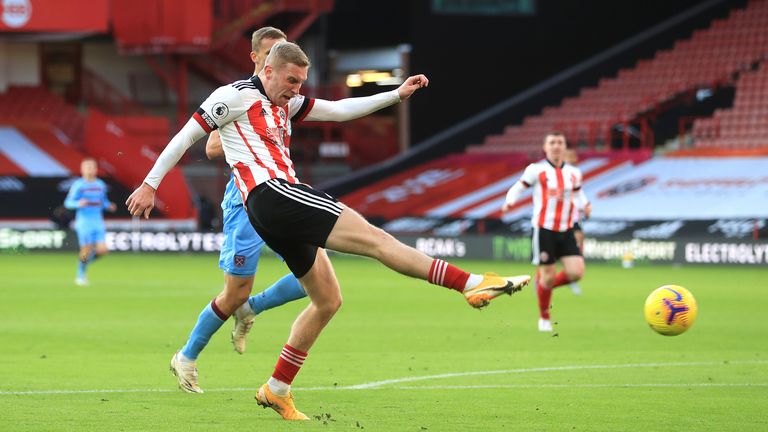 That was as close as the hosts got on another frustrating and fruitless afternoon on the pitch. If this was not a must-win, then next Saturday’s trip to fellow strugglers West Brom certainly is. For West Ham, the only way is up and, with Haller beginning to look like the striker they expected, Moyes will be confident his side can remain in the top half.

Man of the match – Angelo Ogbonna

“Angelo Ogbonna is my man of the match. He’s led from the centre of West Ham’s defence, he’s not missed much in the air at all as Sheffield United have thrown everything at it. It’s been a really dominant display.”

What the managers said

Sheffield United boss Chris Wilder: “Every loss hurts – especially with the position that we’re in. We came into the game full of belief after a reset and I thought we started off the game in good fashion.

“It was always going to be tight and they’ve managed to score a goal out of nothing. With the couple of chances we’ve managed to create, we just couldn’t find that finish. There’s no point moaning and groaning about it – we’ve got to start taking our chances.

“There are teams in this division who have players who can create something out of nothing. What matters is what happens in both boxes, and we’ve had enough to get a result out of the game. We’ve got to keep going. It’s a cut-throat division, so we have to stick together. The effort was there that they want to win, but we’re just a little bit safe at times.”

West Ham boss David Moyes: “I’m really pleased with the three points. It was never going to be an easy game. It’s great to not only win the game but to collect a clean sheet, so I’m really pleased. There is a real self-belief at the moment, the football is getting better and better. Today we showed another side of our game.

“Look at Sheffield United’s record, they don’t concede many. We did miss a few chances but we came here last season and should have picked up a point with Declan Rice’s handball, so to come away with three points today is really good.

“You want strikers to score you the goals that win you games, I sensed a bit of a change in his confidence. There were parts of his game that were very good, and the goal was excellent.”

“West Ham got a little bit of luck with the goal as the ball falls for Haller but the game showed the lack of confidence in Sheffield United. Haller’s celebration was strong and it was great management from Moyes given that he didn’t want to risk (Michail) Antonio with a hamstring. It was jackpot for David Moyes.” 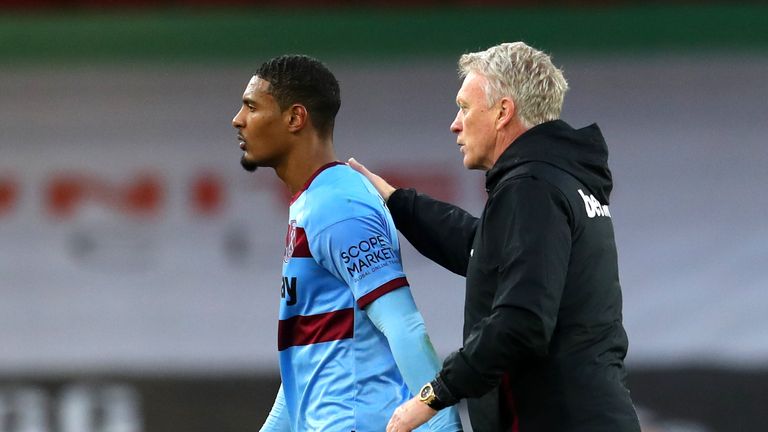 “It feels great for me. I feel so happy for the team as the three points is just what we needed. To score from outside the box is special. My game is not just about scoring goals, but having come back from the national team I wanted to bring the confidence back to West Ham. Hopefully I can show it in the next few games.

“We have a good attitude, and I don’t know exactly what we can achieve. I feel we’re not fully aware of our potential. I don’t want to set any goals, but just prepare game by game and see where it takes us.”

“The big thing about centre-forwards, you want them to score the goals that win you the games because they’re the important ones. I just sensed a little bit of change in his confidence, he was upbeat. Maybe going away with the Ivory Coast for the first time has given him a little bit of confidence. There were parts of his game today that were very good and his goal was excellent.”

Sheffield United face fellow strugglers West Brom at The Hawthorns next Saturday night in a huge clash at the bottom – that game is live on Sky Sports. West Ham are back at the London Stadium for a clash with Aston Villa, which is live on Monday Night Football with an 8pm kick-off.

When will the 2021 NHL season start? Bettman says it’s a ‘work in progress’