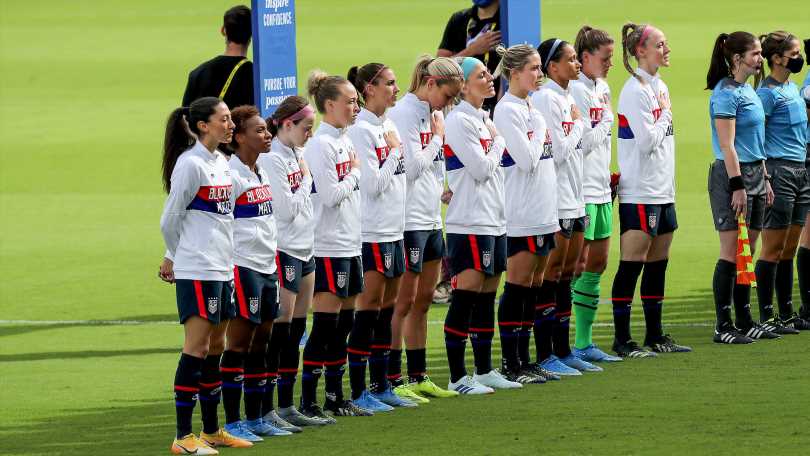 For the second straight SheBelieves Cup match, the U.S. women’s national team was pushed to the limit by a game opponent, only to squeak past with a shutout victory.

A first-half Christen Press goal and a late Megan Rapinoe strike were enough to defeat Brazil 2-0 on Sunday, three days after the USWNT got past Canada 1-0 in their tournament opener.

Though there was much to discuss from the game itself, the biggest talking point may have come before the ball was even kicked.

‘We never felt we were going to kneel forever’

After Megan Rapinoe first knelt during the national anthem in 2016, U.S. Soccer instituted a rule that required players to “stand respectfully” for the pregame song. Last summer, amid the nationwide protests stemming from George Floyd’s killing, that policy was reversed.

The USWNT has now had five matches since the policy was reversed and the anthem was much the same in the first four of those games: Most players knelt while a few — usually two to four — stood.

The tableau that produced was one of a team divided. On Sunday, the USWNT was, once again, united.

Though every player stood for the anthem before the game, the display of 11 players all pulling in the same direction doesn’t necessarily mean that direction was the correct one.

After the game, Crystal Dunn, who has been one of the more outspoken USWNT players regarding racial injustice, said the team decided as a collective that the time for protest had passed, replaced by a time for action.

“Those that were collectively kneeling felt like we were kneeling to bring about attention to police brutality and systemic racism, and I think we decided that moving forward we no longer feel the need to kneel because we are doing the work behind the scenes,” Dunn said.

“We never felt we were going to kneel forever, so there was always going to be a time that we felt it was time to stand.

“I think we’re all proud that we are doing the work behind the scenes and it was just a game that we felt we were ready to move into the next phase and just continuously fight for change.”

There will be debate as to whether the team is doing the right thing by ending its protest phase. Doing the work may be a more concrete form of activism than a simple gesture like kneeling, but a team as visible as the USWNT has the platform to call attention to any issue of its choosing.

Ultimately, with kneeling no longer an option for visibility, the team must double down on making its efforts to combat racial injustice seen and heard.

Horan ‘gets a hold of the game’

With Sam Mewis sidelined by injury, Lindsey Horan has taken full advantage by playing nearly every minute of the first two games of the tournament. With less competition for minutes in central midfield, Horan has delivered — especially on Sunday.

Horan was everywhere against Brazil, picking up the ball in pockets of space and spraying passes all over the field. With the benefit of Julie Ertz’s defensive work behind her, Horan has the freedom to roam, and she popped up in the right place in two moments that made the difference in the game.

Horan assisted both of the team’s goals against Brazil in a performance her manager said he’d been hoping for.

“I had a conversation with Lindsey which was very good and I asked her to get hold of the game,” head coach Vlatko Andonovski said. “We went through some videos with Lindsey and we talked and analyzed the game, how she can impact the game and I’m just very happy with her performance.

“I just told her as we were walking out that she did get a hold of the game. She was managing the pace, when we were in possession she was controlling the midfield when we were out of possession. Overall, a great performance.”

Defense less than airtight once again

The USWNT has conceded just one goal in 14 games since the 2019 World Cup semifinal against England. Though the team has managed two shutouts to start the tournament, its backline has looked far from airtight.

Much like Canada did, Brazil opened up the USWNT backline on several occasions, particularly in the first half. It took some poor finishing, a heroic tackle from Dunn and two saves from Alyssa Naeher to keep a clean sheet.

“If we give them a lot of space as a unit, they’re going to expose it,” Andonovski said. “I thought in the first half we didn’t do a good enough job in closing down the space and once again, we were caught on the counterattack.”

Andonovski was, however, happy with how his team responded in the second half, pointing to two specific adjustments that helped keep Brazil’s attack at bay.

“In the second half, after we adjusted the structure a little bit I thought we did an incredible job,” Andonovski said. “Julie Ertz sat a little bit deeper in between the two defenders, so any time we had a defender leave her position, Julie was there to cover.

“Another thing we did very well was alternate the runs on our fullbacks so at no point in time did we had both fullbacks going, which helped us with numbers when we lost the ball.”