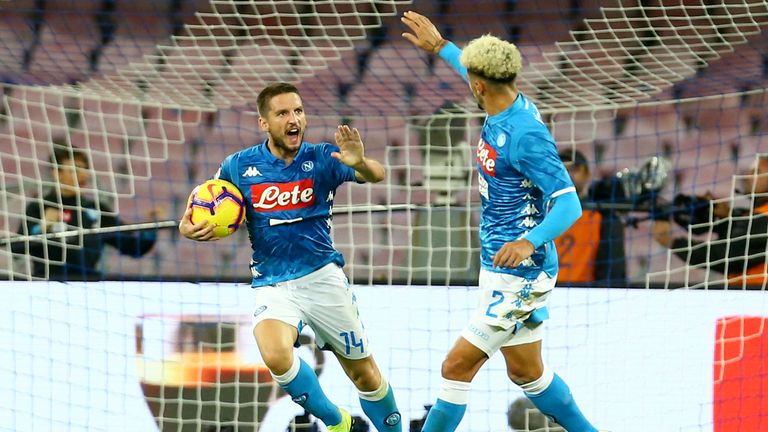 Dries Mertens came off the bench to score a last-gasp equaliser as Napoli drew 1-1 at Roma in Serie A on Sunday.

Napoli dominated but it was Roma who took the lead in the 14th minute through Stephan El Shaarawy.

Raul Albiol then headed Edin Dzeko’s effort off the line but Roma suffered a setback shortly before the break as captain Daniele De Rossi went off with injury.

Napoli continued to attack after the break and, after Jose Callejon hit the post, Mertens levelled in the final minute.

A stunning strike from Suso saw AC Milan put a miserable week behind them to beat Sampdoria 3-2.

The Spain forward struck shortly after the hour mark, racing down the right and cutting in before curling the ball into the far bottom corner.

Patrick Cutrone scored Milan’s opener which was set up by Suso and assisted the other for Gonzalo Higuain. Former Milan midfielder Riccardo Saponara also had a goal and an assist for Sampdoria.

Milan came into the game after back-to-back defeats against Inter Milan in Serie A and Real Betis in the Europa League.

Promoted Frosinone earned their first win of the season with a 3-0 victory at SPAL.

Raman Chibsah, Camillo Ciano and Andrea Pinamonti scored against a SPAL side that were coming off a shock 2-0 win at Roma.

Last-place Chievo Verona, who have been deducted three points for false accounting, are still on minus one points following a 2-1 loss at Cagliari.

Elsewhere, Sassuolo twice came back from a goal down to draw 2-2 with Bologna.