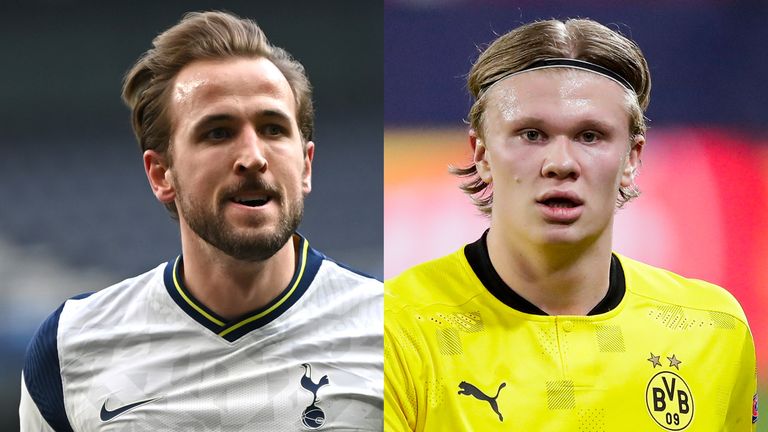 Sergio Aguero is leaving Manchester City so who will replace the club’s all-time top goalscorer at the Etihad?

City have known Aguero’s time was coming to an end for some while. The 32-year-old has scored only one Premier League goal this season, and has made only 11 starts in the league since the beginning of 2020.

The club’s forward planning, led by director of football Txiki Begiristain and chairman Khaldoon Al Mubarak, has seen the City win four Premier League titles in the last eight years, with a fifth looking likely ahead of Aguero’s departure.

But arguably, no player City have had to replace so far has had the influence of Aguero – who has scored almost a quarter of their Premier League goals over the last decade.

So who is in the frame to step up and become the next leading man at the Etihad?

A man with Haaland’s quality is never going to be far from the top of the list for a team like City, but unlike many other potential successors, the club already has a personal draw for the Norway international.

Haaland’s father, Alf-Inge, played for City in the early 2000s and Erling has been pictured in a sky blue shirt from around that time. Things have moved on a lot since then, but having scored 33 goals in 31 games in the Bundesliga this season, and still at the tender age of 20, there are fewer hotter prospects in world football – if City want a star striker to lead the line for the next decade, this could be their man.

“The ability he has, he believes so much in himself,” three-time Premier League Golden Boot winner Thierry Henry told Sky Sports of Haaland’s talent. “There is a bit of cockiness about him, if you can call it that. You have to look at people and say, I’m going to score.

“He doesn’t care about anything other than the goal. Other players will go wide but he wants to stay in front of the net, between the posts, he knows he’s lethal there.

Haaland’s talent has not been restricted for the Bundesliga. He is already the youngest player in history to score 20 Champions League goals.

Amid a stormy season for Borussia Dortmund, does his furious reaction to their 2-2 draw at relegation-battlers Cologne before the international break signal all is not well in Germany?

Former Manchester City midfielder Richard Dunne thinks he would be a ‘perfect fit’ at the Etihad.

He told Sky Sports News: “City have played without a traditional number nine in a lot of games, but over the course of a season you would still prefer to have it.

“Haaland’s a great player, the potential he’s got, the goals he’s scoring, listening to him in interviews his mentality seems spot on.

“He’ll be exciting to come to the Premier League, it’d be brilliant to see him at City. The way they play would suit him, he likes to be in the box and score goals, and the number of opportunities they create would be phenomenal. He looks hungry, with the same mentality as Aguero has, so if he wants to come I’m sure he would fit in perfectly.”

When on the fringes of the Liverpool first team and battling recurring injuries only a few years ago, you would not have thought Danny Ings would be a potential Aguero successor – but a spell on the south coast with Southampton could barely have gone any better for the now-England striker.

Certainly, it has proven enough for City to take an interest in the 28-year-old, who is right in his prime and has scored 30 goals in 52 Premier League starts since the beginning of 2019/20.

In January the Daily Telegraph claimed Ings has targeted a return to a Champions League club this year, which has stopped him from signing a new deal at St Mary’s, while Sky Sports understands the ex-Burnley man is viewed by the City hierarchy as a more affordable alternative to Haaland, who is expected to cost in excess of £100m.

Is this the time? Harry Kane’s future is rarely far from the back pages, but after the England captain said he would decide his fate after the European Championships this summer, and with Roy Keane insisting he must leave Tottenham, speculation over his next move has never been louder.

A move to Manchester United has been mooted for years but if silverware is his main aim, as he eluded to in more pointed comments during last year’s lockdown, recent form suggests neighbours Manchester City would be his best bet.

“It’s a hard question to answer right now,” said Kane – who insisted he was focused on the rest of the season with Spurs and then the Euros – when asked about his future.

That prompted Keane to tell ITV: “If you are a top player you want to win the big trophies. There’s a big few months coming up for Tottenham – the League Cup final and can they get into the top four? That’s a huge question mark, will it influence him?

“He’s under contract and Tottenham will have a lot to say about it. But if you are in his shoes this summer, l think he has to move to win the big prizes. He’s not going to do it at Tottenham.”

But is he an attainable target? Sky Sports News’ Kaveh Solhekol thinks not. He said: “The facts of the situation are that Kane has never said he wants to leave Tottenham. He has more than three years left on his contract, and because of the pandemic, I think it would be virtually impossible for anyone to afford him this summer.

“Spurs are in the League Cup final, so he could win a trophy against Manchester City in April, and only three points off a Champions League spot.”

Another striker to cross the city divide? Former Manchester United striker Romelu Lukaku is admired by Pep Guardiola, according to reports, and has found form again under Antonio Conte at Inter Milan, who look likely to win Serie A this season.

Lukaku could follow in the footsteps of Andy Cole and Carlos Tevez in enjoying successful spells on both sides of Manchester, although the Daily Mail claims he is not likely to leave the San Siro while Conte, for whom he has scored 42 league goals in 56 starts, is in charge. Is the man to follow Aguero already at Eastlands?

Kevin De Bruyne has deputised in a false-nine position at times this season, and given City’s lung-busting run to the top of the table in that time, they have not missed out on a traditional out-and-out striker in that time.

Perhaps it is time for Gabriel Jesus to step up to the plate.

The 23-year-old has never fully lived up to the stunning 13 goals in 19 games which started his City career in 2016/17, but 28 goals in 44 starts from the two-and-a-half seasons since is not bad going. Jesus has often found Aguero a difficult object to move – and now, as the only other number nine currently on City’s books, he has never had a better opportunity to stake his own claim.