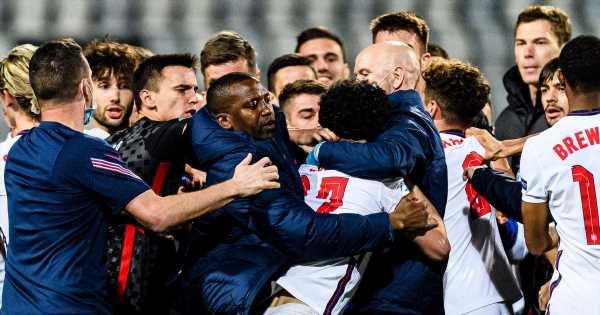 Curtis Jones was dragged away by staff as tempers flared following England's UEFA European Under-21 Championship group stage win over Croatia – which left them one goal short of progression.

The 20-year-old, who is a regular under Jurgen Klopp at Liverpool, tried to confront Croatia players after the final whistle which turned into a scrap.

Jones was pulled away by England staff with a bloodied nose from an earlier incident, before being shown a second yellow card for his loss of control after the match.

It is not yet known what prompted his reaction, with his England colleagues left devastated by the late strike that ended their knockout stage dream.

Jones had grabbed a crucial second goal after Crystal Palace star Eberiche Eze scored from the spot to give the Young Lions a chance to seal the minimum requirement of a two-goal victory.

Despite opening defeats against Portugal and Switzerland, that margin would’ve seen them qualify as Aidy Boothroyd tried to organise his side in the closing stages.

An injury time wonder-goal from Domagoj Bradaric would then follow to break English hearts, with Boothroyd's contract set to expire this summer.

"We hit the cross bar twice and missed chances that normally we would take and we scored two goals. He will never score another goal like that again so that's very disappointing.

"We gave ourselves a mountain to climb and we almost did it, but unfortunately we missed out by one goal.

"Football is a cruel game, it's great when you win it, but it's devastating when you don't in a situation like this. We're all very disappointed.

"You can't rely on other people doing you a favour in this tournament. We should've got points onboard against the Swiss and we could've and should've got something against Portugal.

"I love being involved with these players and that makes it even more difficult to deal with. I'm going to keep going and see what happens."