Russian footballer – wearing James Bond inspired 007 shirt number – scores incredible BACKFLIP penalty… and it’s not the first time he has pulled off the sensational spot-kick either!

A Russian footballer has taken the internet by storm after scoring an outrageous penalty kick by performing a backflip at the same time.

Norik Avdalyan, who also holds Armenian citizenship, scored the sensational spot-kick while playing for Nefis Kazan – who compete in the third tier of the Russian football pyramid.

Avdalyan showed no indication he was going to produce the moment of magic as he stepped up to take the penalty, before casually jogging up to the ball to take the kick. 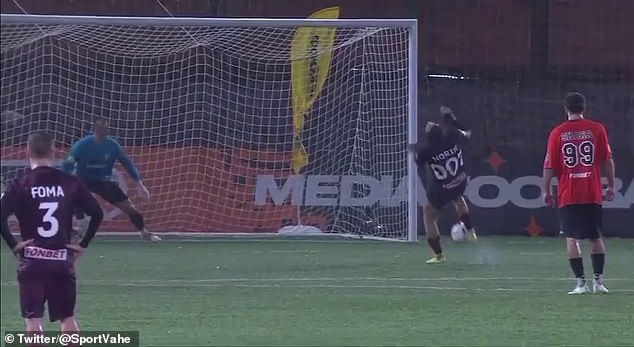 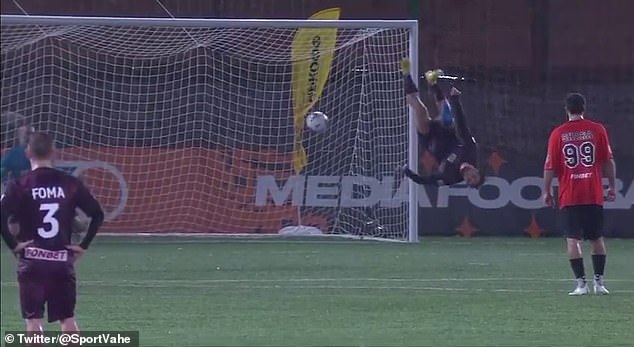 There he then used his kicking foot to strike the ball while also using the motion to lead his backflip, completing a successful landing before his chipped effort had even hit the net.

The nature of the strike does appear to hold some merit outside of simply showing off what is an incredible piece of skill, as his motion clearly catches the goalkeeper off guard who had already dived to his right to try and guess what way he was going to strike the penalty.

By that point, the winger was already running off to celebrate where he was mobbed by stunned team-mates.

The penalty kick was captured by TV cameras but also by a team-mate who was wearing a GoPro camera in a match thought to have been an organised friendly.

If there was to be any clue of who would try to adopt the highly unorthodox penalty kick then the 26-year-old would have been a prime candidate among the 22 players on the pitch given he was also sporting the shirt number 007 – seemingly inspired by the highly popular James Bond franchise.

But it’s not the first time he has performed the backflip penalty either. Back in 2018 Avdalyan produced a similar feat while playing for Rubin Kazan’s youth team.

He was successful then too with a finish similarly catching the keeper off guard.

With the World Cup fewer than two months away, would any player try to repeat the act in Qatar?

Given England’s record from 12 yards, including missing three penalties in a shootout defeat last summer that cost them the European Championship against Italy, it might be a tactic Gareth Southgate would think be worthy of deployment ahead of the tournament.