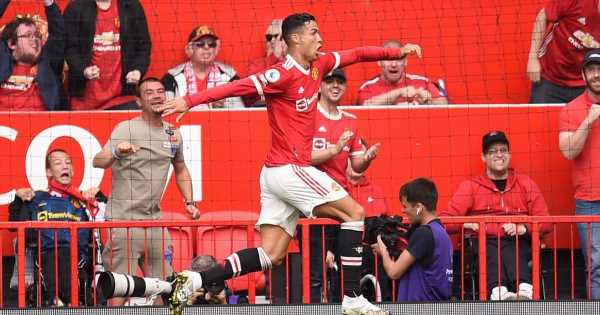 Cristiano Ronaldo hailed Old Trafford as a magical place after he scored either side of the interval in Manchester United's 4-1 win over Newcastle United on Saturday afternoon.

The Portugal striker tapped home from close range in first half stoppage time to open the scoring on his return to the Premier League after 12 years away in Spain and Italy.

The 36-year-old then added a second shortly after the hour mark to restore United's lead after Javi Manquillo had levelled things for the visitors.

Ronaldo lashed the ball past Freddie Woodman before Bruno Fernandes and Jesse Lingard added to the scoring.

In an Instagram post after the match, Ronaldo wrote: "My return to Old Trafford was just a brief reminder of why this stadium is known as the Theatre of Dreams.

"For me, it has always been a magical place where you can achieve everything you set your mind into.

"Along with all my team-mates and with the amazing support that we always get from the stands, we face the road ahead with confidence and optimism that we'll all be celebrating together in the end.

"Proud to be back at Man United and playing in the Premier League once again, but above all, happy to help the team! Let's go, Devils!"

Will Manchester United win the Premier League this season now they have Cristiano Ronaldo? Let us know in the comments section below.

Ronaldo's brace took his United tally to 120 goals and leaves him just 14 goals away from 100 in the Premier League, after he scored 84 league goals in his first six seasons in England.

Both Ronaldo and United now shift their attentions to the Champions League, as the Red Devils travel to Switzerland to take on Young Boys.

The win on Saturday afternoon maintained United's unbeaten start to the season and lifted them to the top of the Premier League table for the time being with 10 points from four matches.

Following their European exploits in midweek, they will travel to the London Stadium to face West Ham United next Sunday.