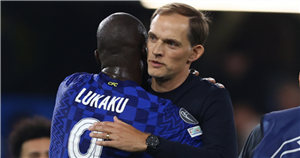 Chelsea boss Thomas Tuchel altered his tactics during their Champions League opener against Zenit on Tuesday at Stamford Bridge as his side ran out 1-0 winners.

Romelu Lukaku scored his first ever Champions League goal for the club having rejoined from Inter in the summer, heading home from a pinpoint Cesar Azpilicueta cross during the second-half.

Although the Blues were far from their best against the reigning Russian Premier League champions, they found a way to utilise their star signing and get underway with a victory.

Lukaku, who has now scored four goals in four games across all competitions this season, briefly touched on a change in tactics that helped him get the only goal of the contest.

The 28-year-old spoke to the media after the encounter, and admitted that the manager had a couple of demands at the break following a goalless first period.

"He asked for more movement in the middle of the pitch, trying to add the extra man in the middle," Lukaku told BT Sport after Chelsea grabbed all three points.

"From there we just tried to create chances, through balls or me holding the ball and putting players across. That's what we did and eventually we scored."

Will Romelu Lukaku fire Chelsea to major silverware this season? Give us your thoughts in the comments section

Tuchel later said of the goal: "It was a very, very good and dangerous ball.

"Because it comes from a difficult position to defend around the box. The target was the second post with Romelu and Kai (Havertz) was also there.

"That's why he's here and that makes him a world-class striker.

"You don't find many strikers of that quality and the guys who really score regularly for their teams are so, so important because the goal changes the whole momentum of the match.

"It gives the whole team a lot of belief to know that maybe one half-chance or one chance is enough to make him score.

"And it's more than just talent that he brings because he has the belief, he takes pressure off other guys’ shoulders, he has the personality not to be impatient or to lose confidence."