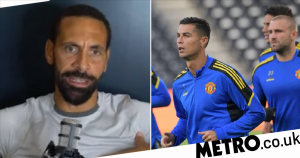 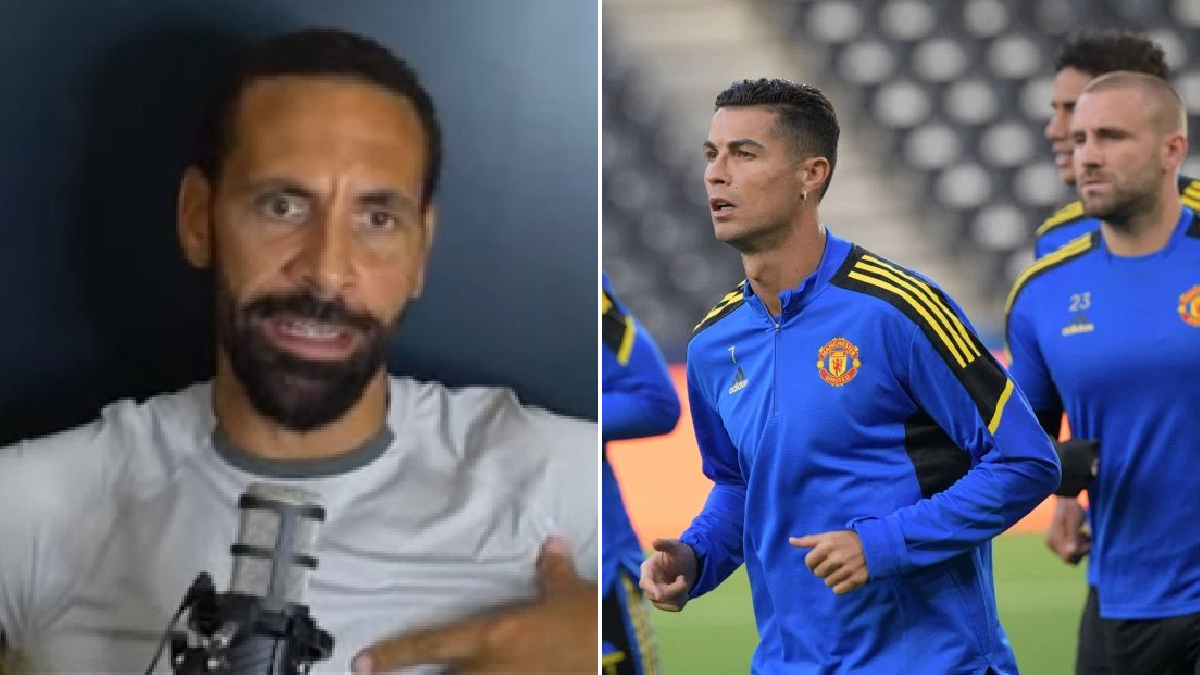 Rio Ferdinand believes Cristiano Ronaldo will already have spoken to his new Manchester United teammates following his second debut to encourage them to make better use of one of his greatest strengths.

The Portuguese superstar enjoyed the perfect homecoming on Saturday at Old Trafford, bagging a brace in a 4-1 victory over Newcastle as the Red Devils’ unbeaten start to the new Premier League season continued.

But Ferdinand believes the 36-year-old will not have been entirely happy and will be drumming into the wide-men that they must deliver more crosses into the box so he can capitalise on his incredible aerial ability.

Speaking on his Vibe with FIVE YouTube show, Ferdinand explained: ‘He can jump, but again it’s about positioning of where he’s going to be to receive the ball.

‘That’s one thing that I would say, not a criticism, but one thing to look at and learn from, from Man United’s point of view from the weekend’s first game.

‘And I’m telling you, he’d have been in there [the dressing room] after and this week saying, “Listen, cross that ball! When you get opportunities to cross the ball, you put it in there because I’m aggressive and I want the ball.”

‘And he knows, and it’s well documented that I’ve always said this for the last few years, the defenders in this country are not great at defending crosses. It’s not an art that is actually honed anymore.

‘When I was a kid, that was part and parcel of your daily routine, defending crosses, defending the box. From what I see in games, I don’t feel players are doing that enough.

‘Because when I see balls come in the box at the moment, body positions and angles etcetera are way off. And it isn’t easy as a defender, I can tell you I’ve made many mistakes in that position. But you’ve got to work at it.

‘And I think he [Ronaldo] can exploit some naive defending at the moment in the Premier League.’

When it was suggested that United’s full-backs do not cross enough, Ferdinand continued: ‘That’s what I’m saying. That’s what he’ll be saying! When you get in those positions, or the wide players, you get out wide and there’s an opportunity to shift the ball and cross it, don’t turn out and think we’re going to keep the ball and recycle it and play possession football.

‘If there’s an opportunity to cross it with someone like him in there, you cross it! Same with Cavani. Same with Radamel Falcao when he came to the club his best route to goal to score was from crosses. His stats tell you that. Man United were playing tiki-taka football not crossing the ball.

‘Play to the players’ and team’s strengths. And Cristiano, when the ball is wide, he attacks it better than anyone.’