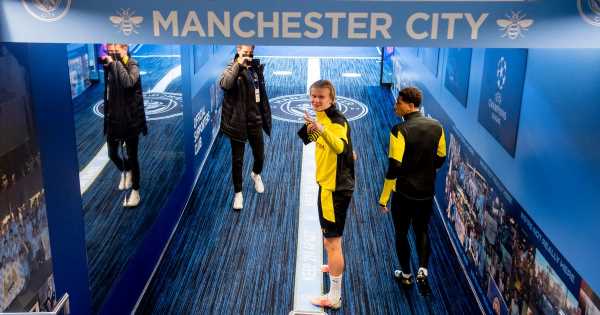 Erling Haaland is seen by many as the final piece in the Manchester City puzzle – yet Richard Keys still doubts if he is the 'real deal'.

One of football's worst-kept secrets was finally confirmed on Tuesday as City released a statement outlining a deal was in place to sign the Borussia Dortmund striker this summer. Haaland's release clause had made the Norway international one of European football's most coveted signatures in the upcoming window.

Haaland has enjoyed a meteoric rise since announcing himself on the Champions League stage with Red Bull Salzburg, and has scored almost a goal a game since signing for the German giants in December 2019. Pep Guardiola was unsuccessful in his pursuit of Harry Kane last summer, but the City boss looks like he has finally landed the number nine he has craved.

The defending Premier League champions are already the division's top scorers this season, and the arrival of Haaland will likely see the 21-year-old immediately discussed as a Golden Boot contender. However, beIN Sports anchor Keys unfavourably compared the young striker to Jadon Sancho and even West Ham flop Sebastien Haller when insisting the summer signing still has 'something to prove'.

Fellow presenter Andy Gray hinted Haaland would be worth in excess of £120m if there was no release clause in place, and suggested he would command a fee higher than former City target Kane. It was in response to this claim where Keys first cited doubts over the deal.

The former Sky Sports presenter said: "So was Jadon Sancho and he's done nothing in his first year at Manchester United. It's not a gamble, but I think we're into the unknown here. I don't think he has yet proven he is the real deal."

HAVE YOUR SAY! Will Erling Haaland help Manchester City win the Champions League next season? Comment below!

"As I've said to you before about being a centre forward, the thing you need to be sure of with the team you join fits you. That's important for Haaland, and I'm sure Guardiola has thought about that and has gone through it in his mind. Does he fit our pattern of play, will we get the best out of him? They did with Aguero, but will they do that with him? That's still the one thing we don't know. But from what I've seen of the lad, and I've seen him a lot, I like his movement, his finishing, everything he does. He looks the real deal, that's all I'm saying."

However, Keys refused to back down, saying: "Aguero, let's not forget, had a very difficult time when he first started working with Guardiola. Jesus was preferred. All I'm saying is Jadon Sancho came in as wonder boy, and has done nothing. I still think he has got work to do, and the jury is having a conversation. Sebastian Haller has done really well in the Champions League, but he didn't do very well in the Premier League. I think the boy has got something yet to prove."