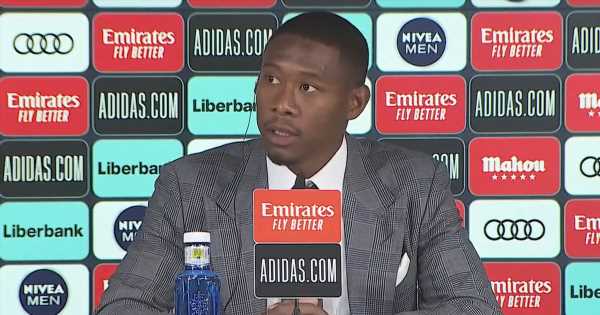 New Real Madrid signing David Alaba has urged the La Liga giants to make a U-turn on their decision to allow Raphael Varane to leave the Bernabeu this summer.

The Frenchman failed to agree terms on a new contract to extend his decade-long stay in the Spanish capital, with Los Blancos reportedly unable to match his wage demands.

With the 28-year-old’s current deal having entered its final year, this is likely to be the last transfer window in which Madrid can bring in a substantial fee for him.

As it stands, the frontrunners to sign him are Manchester United, who are currently negotiating with Madrid over their asking price for the defender.

The Red Devils want Varane to become Harry Maguire’s partner in the heart of their defence, in the hope that it can lift them into Premier League title contention.

Madrid are understood to be demanding a fee in excess of £50million for the World Cup winner and are holding firm on that valuation.

But the La Liga side have now been told to make a sensational U-turn on their decision to attempt to sell Varane this summer.

It comes from the man who is set to replace him in Madrid’s backline if he does indeed depart the Bernabeu.

Would Raphael Varane be a success at Manchester United? Comment below.

Alaba has joined Los Blancos on a free transfer from Bayern Munich after his contract at the Bundesliga giants was not renewed.

The Austrian has signed a five-year contract with Madrid, likely using funds that would otherwise have gone towards Varane’s contract.

Despite that, Alaba has urged his new club to find a way to keep Varane in Spain, rather than allow him to move to Manchester.

“Varane? Yes, I would like to (play with him), of course,” Alaba said at his official presentation on Wednesday.

“He has had many years as an excellent centre-back…great.”

Whether Madrid have the funds to meet this request is unknown, but Varane will also take some convincing to stay having set his eyes on a new challenge.