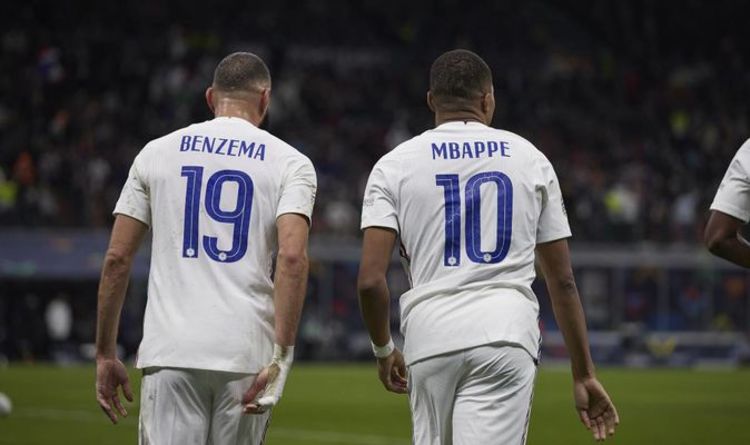 Karim Benzema and Kylian Mbappe both scored in France’s 2-1 win over Spain in the Nations League final, and the Real Madrid has teased fans yet again about the prospect of the current PSG star joining him at Los Blancos.

It may only be a “matter of time” until we see Kylian Mbappe in a Real Madrid shirt according to Los Blancos star and French teammate Karim Benzema, who has given his verdict once again on the move.

Mbappe has emerged as one of the top talents in world football, and the 22-year-old World Cup winner was the subject of two rejected bids from Madrid this summer.

The latter was a world-record bid, as Paris Saint Germain rejected an offer of £189million for the French star, despite facing the potentiality of losing Mbappe for free next summer.

Benzema has enjoyed playing alongside Mbappe for France, and has opened up about the possibility of sharing the stage with him in Madrid.

Playing alongside Mbappe is a relatively new experience for Benzema, who only recently settled his feud with the national team ahead of Euro 2020, scoring four goals in his first international tournament for France since 2014.

Benzema was exceptional for Madrid last season as he scored 29 goals in all competitions, and the Frenchman already has more goals than games played in La Liga so far this campaign.

Madrid want Mbappe, and it’s reported that the 22-year-old’s dream is to play for Los Blancos, which is heavily backed by Benzema who spoke to Spanish state network TVE following France’s 2-1 win over Spain in the Nations League final.

Benzema said: “Why not? I’ve always said it and I’ll say it again, of course I would like to [play with Mbappe] one day.

“I enjoy playing with him in the France team and so why not in the future [for Real] as he is a great player. But right now we have to respect his club, Paris.”

The Frenchman’s comments come after previously claiming it was only a “matter of time” before he played alongside Mbappe in Spain, as he teased fans while speaking to L’Equipe.

Benzema continued by saying to the French outlet: “He wants to see something else. Someday he will play for Real Madrid.”

Mbappe has entered the final year of his PSG contract which has left fans scratching their heads as to why the French side rejected what would have been a record-breaking transfer for the Frenchman.

The 22-year-old reportedly has his heart set on Madrid, and if PSG cannot get Mbappe to sign a new deal before January, the forward has the ability to be able to speak to new clubs about signing a pre-contract agreement for next season.

Mbappe broke-through as a teenager at Monaco, and put on mesmerising displays in the Champions League, most famously against Manchester City as his goals helped the Principality knock Pep Guardiola’s side out of the competition.

Following an initial loan spell, Mbappe was signed by PSG for €180m (£152.5m) and has become one of the best talents in world football, scoring 136 goals in 182 appearances for the French giants.

Mbappe and Erling Haaland are set to be the next biggest stars to takeover from an era dominated by Lionel Messi and Cristiano Ronaldo, and the Frenchman could follow in Ronaldo’s footsteps by signing for Los Blancos.

The fact PSG turned down such an offer is baffling from an outsiders perspective, as it looks destined that Mbappe will leave the club for nothing despite currently being the second most expensive signing in history.

Either PSG are confident they can convince him to re-sign in order to allow the club to receive an even bigger fee next summer, or they hope that the high-profile captures of stars such as Lionel Messi and Sergio Ramos will be enough to convince the star to stay for the long-term.