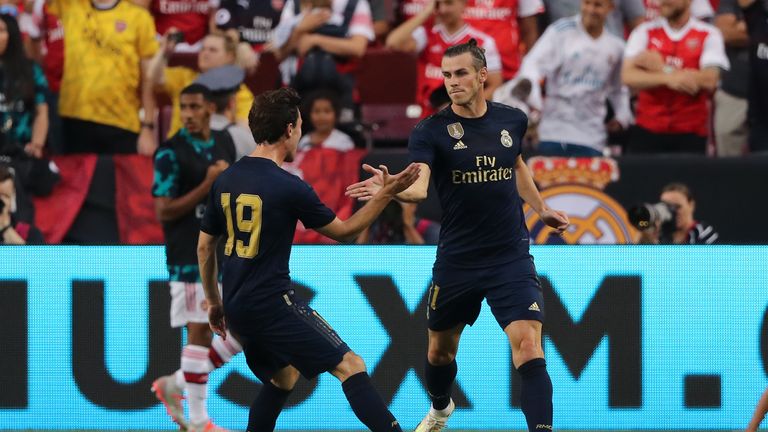 Wantaway forward Gareth Bale netted in a surprise appearance for Real Madrid in their penalty shoot-out win over Arsenal.

In a game where both teams were reduced to 10 men it was Bale’s impact from the bench that instead stole the headlines, with the Welshman scoring 10 minutes after coming on and less than two days since Zinedine Zidane had accused him of refusing to play in their opening friendly with Bayern Munich as part of an ongoing spat over his future.

Any reconciliation was probably the last thing on Zidane’s mind earlier in the game, with Nacho sent off for handball inside 10 minutes and Alexandre Lacazette firing Arsenal ahead from the spot, before turning provider with a deft flick for Pierre-Emerick Aubameyang to grab a second on the break.

Sokratis’ two bookings inside a minute before the break levelled things up in terms of personnel, and after the break Real levelled the scores too with a pair of quick-fire goals, the first from surprise inclusion Bale who toe-poked home the rebound from Marco Asensio’s effort.

Within minutes Real restored parity with Asensio getting the final touch this time, a powerful effort in at Emiliano Martinez’s near post from Marcelo’s cross.

After Bale’s clearance and near-miss for a second, Arsenal substitute Eddie Nketiah missed two fine chances to win the game late on but Arsenal were probably happy to settle for a draw they barely deserved come the full-time whistle.