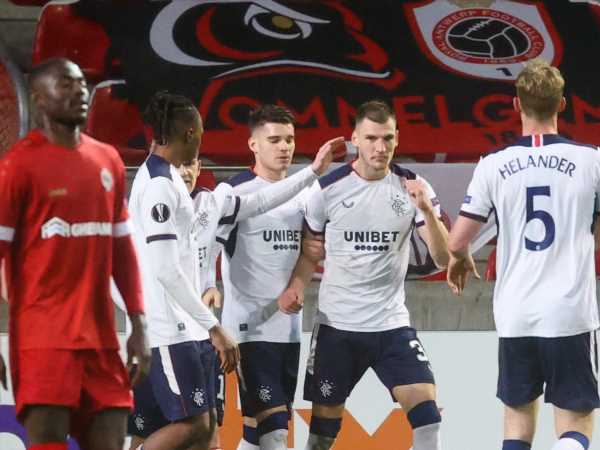 In a clash that had everything, Scotland’s champions-elect held their nerve to salvage their unbeaten run in continental action this term and claim a vital first-leg lead.

Things looked to be going to plan for the Light Blues at the Bosuilstadion as Joe Aribo fired them ahead – only for Antwerp to hit back in a controversial end to the first half with goals from Felipe Avenatti and Lior Refaelov.

Barisic – making his 100th appearance for the Ibrox outfit – levelled it up with his first penalty only for Gers to concede again as some more poor defending allowed Martin Hongla to score.

But Rangers made it 10 games without defeat in Europe this term as Ryan Kent’s equaliser and another Barisic spot-kick sealed a frenetic finale.

Frank Vercauteren’s side were missing six key men but Rangers now have their own injury fears ahead of next Thursday’s Glasgow return after seeing both James Tavernier and Kemar Roofe suffer first-half injuries.

Gerrard made his intent clear as he welcomed Alfredo Morelos, Roofe and Scott Arfield back into his line-up, although he did raise some eyebrows by benching Ryan Jack, Kent and Ianis Hagi.

And had the Ibrox men been sharper that intent could have had the tie settled by half-time.

For 44-and-a-half minutes, Gers were in total control, dominating two-thirds of the pitch with only some carelessness in and around the Antwerp box letting the hosts off the hook.

Rangers even retained a look of confidence when they lost Tavernier to injury after 24 minutes. Gerrard branded reports of a pre-match injury to the skipper “fake news” on the eve of the match but the discomfort on his face looked very real as he was forced to limp off after a collision with Hongla.

Aribo found Roofe in the six-yard box but the frontman’s rustiness after his recent injury was clear as he failed to get a shot off. Morelos did pull the trigger as he was sent through on Alireza Beiranvand’s goal by Barisic’s wonderful ball over the top – but it was another golden chance wasted as he shot straight at the keeper.

Beiranvand, Antwerp’s second-choice stopper, had given Rangers a couple of early sniffs with mis-hit clearances and it was another blunder that handed Gerrard’s men the opener after 38 minutes. Roofe’s touch was heavy as he tried to control a piercing long pass from Connor Goldson but Beiranvand spilled what should have been an easy gather. The ball fell to Morelos, who teed up Aribo to sweep Rangers’ 100th goal of the season into an empty net as the Iranian held his head in his hands.

But Antwerp got two major gifts from Bulgarian referee Georgi Kabakov before the break. First he gave a soft free-kick as Barisic dived in on Refaelov. It was harsh on the Rangers left-back but there was no excusing his failure to track Avenatti, who was left free to nod home with a brilliant header. Roofe then limped off with calf strain, replaced by Kent, but the bad news was not finished there as Kabakov played eight minutes of stoppage time – four more than the number signalled – before handing the hosts another hugely generous award as Steven Davis made contact with the merest of taps on Refaelov’s ankle inside the box.

There was no reprieve from VAR as the Israeli picked himself up from his theatrical fall to fire past Allan McGregor. But the TV officials were more sympathetic to the Ibrox cause 13 minutes after the break as Kabakov was called over to the screen to review Ritchie De Laet’s tug on Morelos.

The spot-kick was given, with Barisic taking over Tavernier’s duties to ram his team level.

Aribo had already had another attempt kicked off the line by that point but just as Rangers looked set to step up their search for a win, they found themselves behind again with 66 minutes gone.

Antwerp had barely threatened since the break but Refaelov was given too much space on the edge of the box to set the ball up for Hongla, who fired into the corner of the net off the post.

But Rangers refused to give up their proud unbeaten record and claimed a third precious away goal with seven minutes left as Kent swapped passes with Morelos before dancing his way into the box to rifle home the equaliser.

The final moments resembled a basketball match as both teams had clear-cut chances to score – but it was Rangers who got the winner in the final minute as Abdoulaye Seck saw red after stopping a Kent strike with his hand, with Barisic slotting home the all-important penalty. 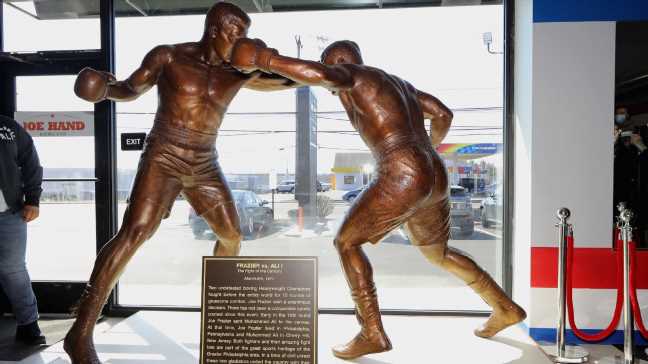