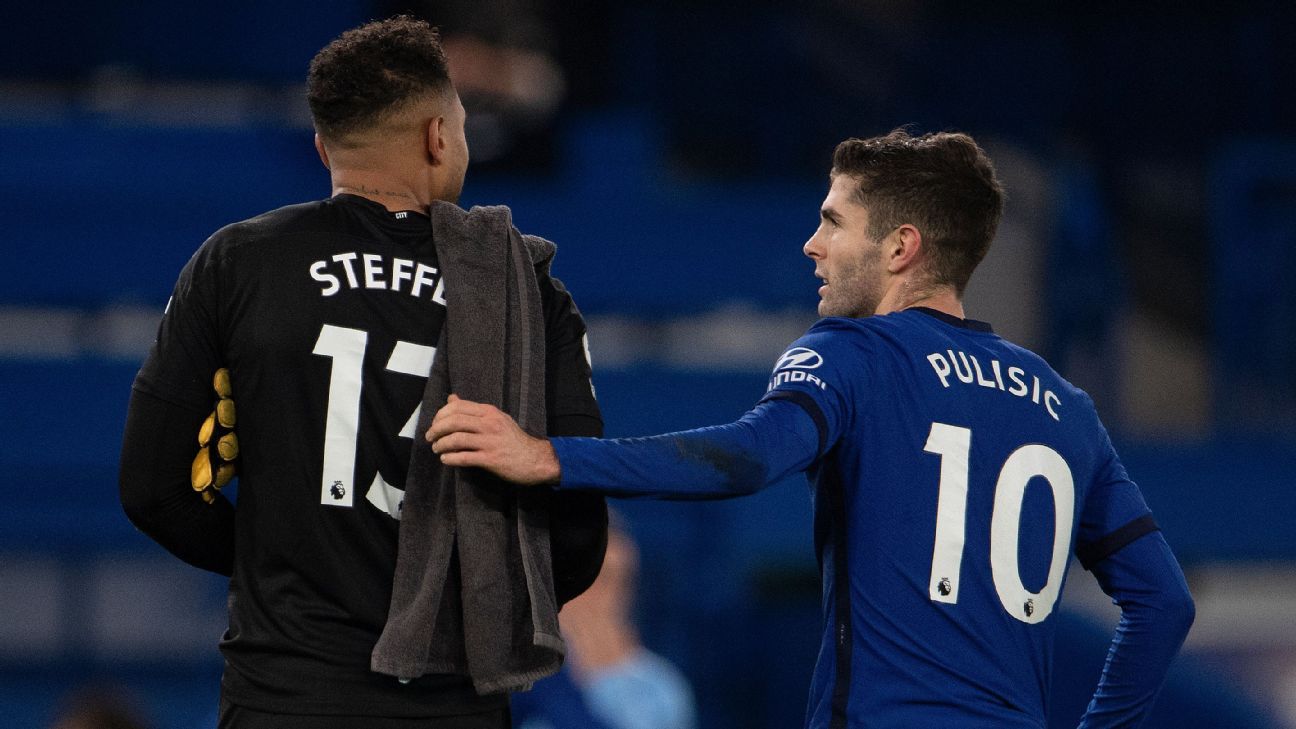 The Champions League final serves as one last celebration of the European club season. And the soon-to-be-concluded campaign has been one like no other for American players.

U.S. performers have dotted some of the biggest clubs in Europe, be it Weston McKennie at Juventus, Tyler Adams at RB Leipzig or Giovanni Reyna at Borussia Dortmund. Americans have been hoisting plenty of silverware too, be it Timothy Weah at Ligue 1 champions Lille, Brenden Aaronson claiming a league and cup double with FC Salzburg, McKennie raising the Coppa Italia or Reyna hoisting the DFB-Pokal. All told, nine different players helped win a total of 12 trophies.

Which brings us to Saturday’s Champions League final. On one side will be Chelsea and U.S. attacker Christian Pulisic; on the other will be Manchester City, which includes U.S. keeper Zack Steffen, who has already become the first American to be part of a Premier League-winning side.

They’re not isolated examples of Americans in the competition, either. Ten such players were on Champions League rosters when the group stage began in October. Beyond Pulisic and Steffen, that group included Adams, McKennie, Reyna, Club Brugge goalkeeper Ethan Horvath, Ajax attacker Alex Mendez, Bayern Munich defender Chris Richards (although he was subsequently loaned to TSG Hoffenheim) and the Barcelona duo of Sergino Dest and Konrad de la Fuente.

All of this highlights that in the 24 years since Jovan Kirovski became the first — and to date only — American man to win a Champions League medal, just about everything about American soccer has gotten bigger. There’s barely a professional game on the planet that isn’t watchable, somehow, over U.S. airwaves. On the domestic level, Major League Soccer (MLS) is up to 27 teams, while the women’s league, courtesy of the work done by the National Women’s Soccer League (NWSL), is looking more sustainable than ever. If one zeroes in on the men’s side, one can’t help but notice the players that the United States is producing.

“I think that our players have grown,” said Kirovski, now the LA Galaxy’s technical director. “There are players who were there before, whether it’s myself or former players that were in Europe. I think MLS has really provided a platform for some of these other kids to perform. And, really, we’ve grown. Those kids that are at big clubs? They have opportunities.”

Sunday’s Champions League final marks the latest manifestation of that growth, but it’s been a long slog. U.S. players have been making their way to European climes since the late 1980s. Usually that meant heading to one of the continent’s relative backwaters; if an American latched on with a club in one of the big leagues in England, France, Germany, Italy or Spain, it was usually at a team in the bottom half of the table. Then there was the age of American players. The vast majority were well into their 20s by the time they moved across the Atlantic. (Kirovski, who joined Dortmund from Manchester United’s youth system as a 20-year-old, was an exception on both counts.)

There’s been a steady, albeit sawtooth climb ever since, though Pulisic joining Dortmund in 2016 proved to be a quantum leap. He made the move with the help of what is known in U.S. soccer circles as the “Golden Ticket” (a Croatian passport that allowed him to qualify as a European citizen), which facilitated his move when he was 16 instead of 18. That allowed Pulisic to continue his development at an age that has historically been when American players would start falling behind their global counterparts. He was soon setting league records for young players, including the youngest non-German to score in the Bundesliga and the youngest to score twice in a league match.

When Pulisic was transferred to Chelsea in 2019, it was for a whopping $73.3 million. He’s endured his share of ups and downs since, with injuries proving to be a considerable obstacle. So did the competition for places. And yet Pulisic has proved that he’s a valued member of the Blues squad, even if he doesn’t always start.

Steffen’s path was more traditional. After progressing through the youth ranks, including a season in the Philadelphia Union academy, he spent two years at the University of Maryland. He then spent a difficult 19 months in the reserves of German side SC Freiburg before making the move back to MLS with the Columbus Crew.

Such a move was once viewed as a death knell for a player’s European ambitions. That proved not to be the case for Steffen, who built up his game again over parts of four seasons in Columbus, delivering some playoff heroics along the way. He then parlayed those performances into a move to City with a loan back in Germany with Fortuna Dusseldorf along the way.

Of the two, Steffen’s path is the more encouraging for U.S. players. There can be stumbles and setbacks, tough periods to build upon one’s game, yet none of that prevents a player from ultimately succeeding in Europe. There’s more patience, and it helps too that the potential payoff is bigger. Kirovski notes that he’s getting calls from big clubs regarding prospects, a development that would have been unthinkable 10 years ago.

“It’s case by case, but I think you’re going to take a risk and a gamble [on U.S. players] as a club because the talent is there,” said Kirovski. “And you’re going to miss probably more than you hit. But we’ve had success. I mean, you look at Pulisic. He’s been at Dortmund, he’s been successful. He was bought by Chelsea for a reason, because he’s developed and done well. He’s given opportunities because of his performance, nothing more.”

As Kirovski looks back on his experience with Dortmund, he thinks of the team’s stars like Andreas Moller and Karl-Heinz Riedle, and how players like midfielder Paulo Sousa and defender Julio Cesar took him under their collective wing. He recalls that as he collected his winner’s medal, he “just took it all in.” He also thinks of how much time has passed.

That thought is balanced by where he thinks the U.S. is heading. And come Sunday, he’ll have some company on the list of American Champions League winners.