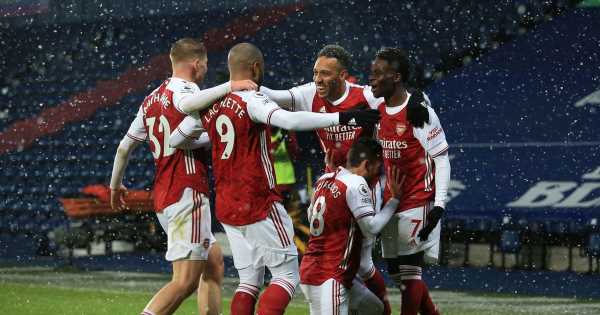 The warning comes amid growing fears that football's failure to follow strict protocols could ruin efforts to keep elite sport going during the current Covid-19 lockdown.

The Premier League has introduced stronger Covid protocols at clubs this week, in a bid to reduce the growing number of positive cases and postponed games.

These include making substitutes wear masks when sat in the stands and banning "unnecessary contact at all times" between players, managers and coaching staff, including handshakes and hugging.

But following numerous breaches of the rules during last weekend's FA Cup third round ties, Premier League chiefs fear those in question are not taking the issue seriously enough.

In conjunction with the Professional Footballers' Association, players and managers will now be reminded of their responsibilities – and those who continue to ignore the guidelines could be fined or even banned.

A Premier League source said: "The protocols are in place for a good reason, which we all know about.

"Ultimately the players are aware of them and it's their responsibility to stick to them. Anyone who doesn't runs the risk of sanctions. The onus is on everyone."

All 20 top flight clubs have been appointed a compliance officer, who has now been given a more robust remit when it comes to keeping tabs on how clubs operate and has access to training grounds, stadiums and even changing rooms.

"We're wearing masks in the dressing room, we try to keep social distancing and so on. If they say to us, 'don't celebrate', we are not going to celebrate. It will not be a big problem, we adapt to everything."

But Arsenal counterpart Mikel Arteta reckons it makes no sense to stop players celebrating when they come into contact all the time during games.

He said: "We are asking our players to be man marking at corners, to be pushing people around, and then we cannot fist-bump anybody, we cannot say hello to anybody.

"It gets a little bit controversial and difficult to understand. Morally, with the situation we have in the country, to keep doing what we are doing, it is a strange feeling.

"If we are able to do it in a safe way there are a lot of positives to take. It's just that balance between when this starts to get damaging and worrying and starts to exploit people – and when we can do it when we are still safe and we can add something positive to this difficult context.

"To keep the industry going is really helpful. It's great if we can do that. If not, it will be the Government making the decision that there's no sense keeping this going."