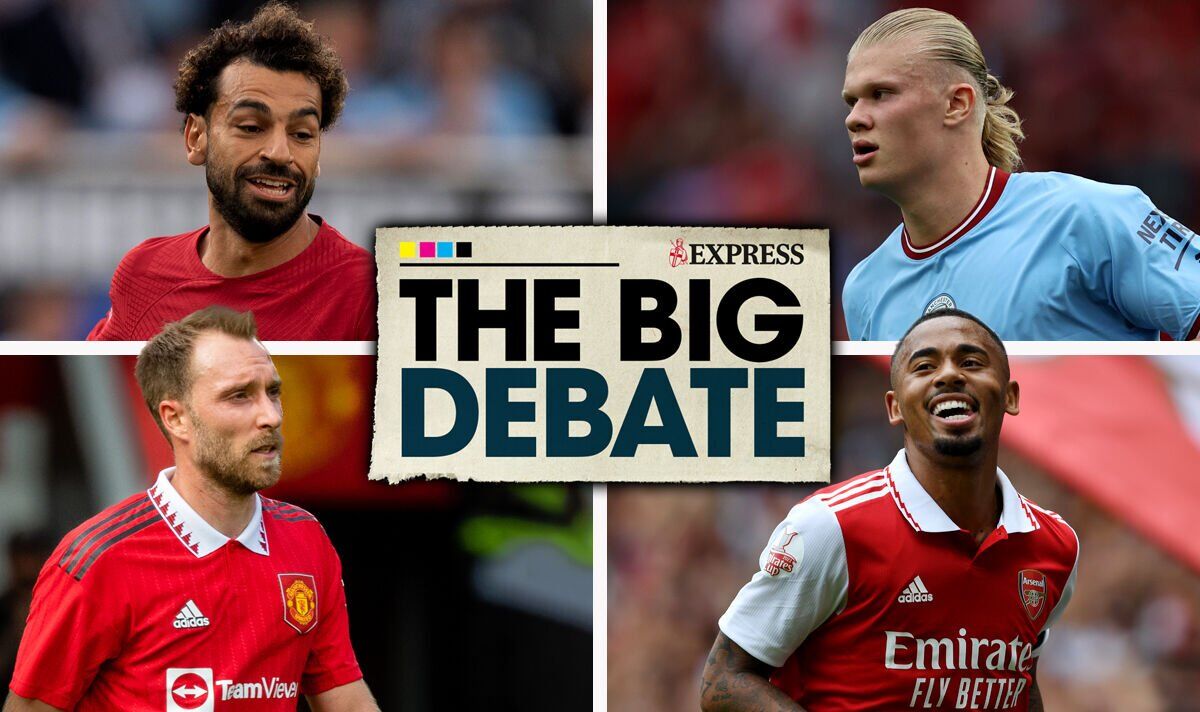 The Premier League is back! The 2022-23 season gets underway with Crystal Palace vs Arsenal at Selhurst Park. Members of the Express Sport team have had their say on the coming campaign and Manchester United have been tipped to endure a difficult first year under Erik ten Hag. None of our writers expect them to secure a Champions League spot although some believe Christian Eriksen could impress at Old Trafford. While reigning champions Manchester City are heavily fancied to edge Liverpool and secure a third consecutive crown. See our predictions in full below.

Joe Krishnan: Man City – Even without Raheem Sterling and Gabriel Jesus, the groundbreaking arrival of Erling Haaland, with at least 20 goals, should ensure City secure a fifth title in six seasons. Expect Tottenham to challenge under Antonio Conte after a successful summer.

Neil Squires: Man City – It looks like a repeat of the two-horse race of last season with Manchester City and Liverpool the thoroughbreds out in front again. For all that Darwin Nunez should be a good fit for Liverpool, they will miss Sadio Mane and City, with Erling Haaland as a blonde arrowhead, have the final piece of their jigsaw.

Charlie Gordon: Liverpool – The new members of Man City’s much-changed squad are bound to take a while warming up to Guardiola’s ideas – just ask Jack Grealish. A slow start would allow Liverpool to build an early lead and stamp their authority on 2022/23.

Sam Smith: Man City – It is difficult to look beyond the reigning champions. Pep Guardiola has refreshed his squad at the right time and his side will just about pip Liverpool to another Premier League title.

Alex Turk: Liverpool – I believe Darwin Nunez and Liverpool will gel together quicker than Erling Haaland and Man City, and that could just be the difference. Expect another thrilling two-horse race, with the Reds prevailing for a record-levelling 20th title this time around.

Jack McEachen: Man City – Just a few points will likely separate Manchester City and Liverpool at the top once again, and the title may fall to the team that avoids the most injuries, but Kevin de Bruyne feeding Erling Haaland is just too good to fail.

Charlie Malam: Man City – Erling Haaland will get too many chances not to be a success and despite a few big sales like Raheem Sterling and Gabriel Jesus, I think their squad is still just a bit stronger than Liverpool’s.

Lewis Winter: Man City – The addition of Erling Haaland will add a different dimension to City this season. He may take a bit of time to get used to Pep’s style of play but they will be unstoppable when he does. 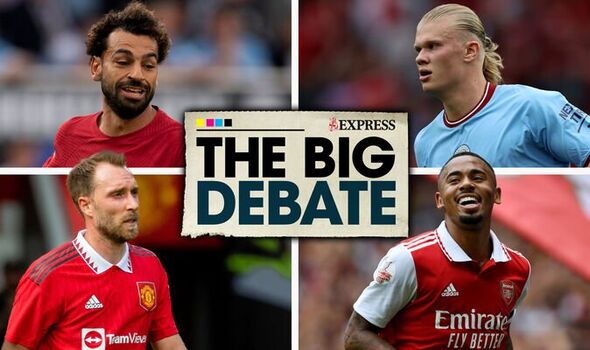 Joe Krishnan: Man City, Tottenham, Liverpool, Chelsea – Liverpool will feel Sadio Mane’s departure more than they might have imagined. Arsenal’s business means they will move ever closer to breaking into the top-four club under Mikel Arteta, but Chelsea’s late spending spree should keep them above the Gunners.

Neil Squires: Man City, Liverpool, Arsenal, Tottenham – The race for the top four has a number of interesting variables given new ownership at Chelsea and new management at Manchester United but evolution in North London could well trump revolution.

Charlie Gordon: Liverpool, Man City, Tottenham, Arsenal – While Liverpool and City are in a league of their own, Tottenham are contenders to crash the party. The battle for fourth will be a tasty one, but the Gunners are settled and Chelsea aren’t. 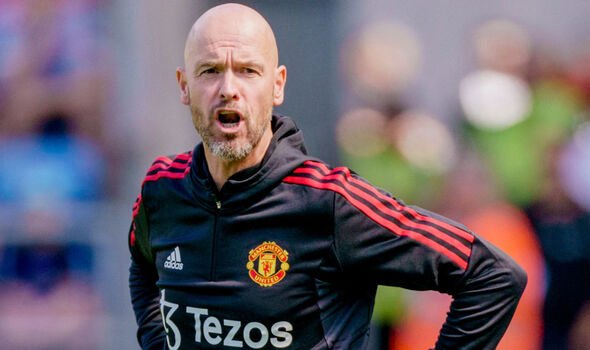 Alex Turk: Liverpool, Man City, Tottenham, Chelsea – Tottenham and Chelsea’s recruitment should help make up an unchanged top four, albeit a stretch behind the title challengers. It’s a toss-up for third, but I’m backing Antonio Conte to go one better than last term with a new-look side.

Jack McEachen: Man City, Liverpool, Chelsea, Tottenham – Extremely boring to pick the same top four as last season, and while I do see the case for Tottenham closer to the top three, Antonio Conte’s sides have typically struggled playing two games in a week at Spurs and I can see that continuing.

Charlie Malam: Man City, Liverpool, Tottenham, Chelsea – Spurs under Antonio Conte will be a force and will bridge the gap to the top two to within 5-10 points. There are question marks over Chelsea but I think they edge Arsenal and Manchester United to fourth spot.

Lewis Winter: Man City, Liverpool, Tottenham, Arsenal – It has to be Arsenal’s time to get back in the Champions League places. Liverpool won’t miss out and Tottenham have recruited well in places, and better than both Chelsea and Manchester United so far.

Joe Krishnan: Southampton, Fulham, Bournemouth – Ralph Hasenhuttl is planning for the future, but his young Saints squad look ill-equipped to deal with the rigours of a Premier League relegation scrap. Fulham and Bournemouth haven’t recruited enough quality players to avoid the drop, unlike Nottingham Forest.

Neil Squires: Fulham, Bournemouth, Nottingham Forest – Leeds might look vulnerable and Brentford too but the gulf between the Championship and Premier League points to a triple yo-yo for last season’s promoted clubs.

Charlie Gordon: Everton, Leeds, Bournemouth – Everton scraped safety by the skin of their teeth and have since lost Richarlison without signing anyone of major note. Leeds’ season could go one way or the other after a major reshuffle, and Bournemouth may not have the quality to survive.

Sam Smith: Wolves, Bournemouth, Fulham: Managers of both Bournemouth and Fulham have already called out their lack of summer business. Wolves relegated is my most left-field shout, but they looked stale at the end of last season and have not sufficiently refreshed. 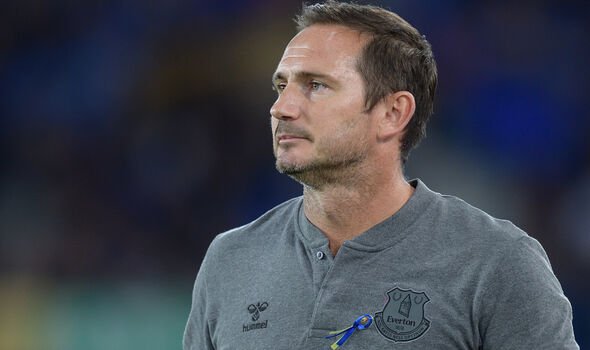 Alex Turk: Southampton, Fulham, Bournemouth – Southampton were lucky they accumulated enough points at the start of last season because their form in 2022 was a disaster, and their recruitment hasn’t inspired me one bit. I expect Fulham and Bournemouth to continue the yo-yo trend.

Jack McEachen: Everton, Fulham, Bournemouth – Fulham and especially Bournemouth’s squads look underprepared in what could be quite a strong bottom half of the table, and Everton haven’t yet replaced Richarlison’s goals, which saved them from relegation last year.

Charlie Malam: Leeds, Fulham, Bournemouth – I like Leeds’ signings but feel like they may need time to adjust and gel together, which could hurt them. Brentford will stay up by a hair and Everton will have another rough year but avoid the drop.

Lewis Winter: Bournemouth, Fulham, Nottingham Forest – It’s not often that all three promoted teams go straight back down. But this season could be one of the rare occurrences when it does happen, though Leeds and Everton may well be in a fight for survival again.

Player of the Year

Joe Krishnan: Erling Haaland (Man City) – He put in a lethargic display in the Community Shield, but you can’t look past Haaland. With the creative talents of Kevin de Bruyne and Bernardo Silva behind him, it’s frightening to think of how many goals he could score this season.

Neil Squires: Phil Foden (Man City) – The Manchester City midfielder has all the talent in the world and a support cast at the Etihad that can help him rule the Premier League. At 22, this is his time.

Charlie Gordon: Harry Kane (Tottenham) – It’s do or die for the England captain at Tottenham this season, with Antonio Conte providing their best chance of success in recent memory. If he finds his rhythm early, Kane could bag 30 before the Premier League season is up.

Sam Smith: Kevin de Bruyne (Man City) – Having an actual centre-forward in Erling Haaland might help De Bruyne this year, having managed more goals than assists last season due to the absence of a goalscorer. 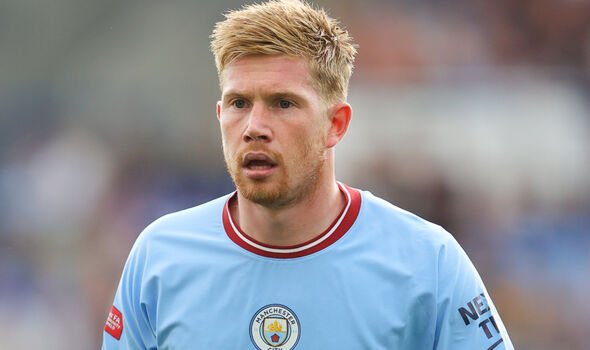 Alex Turk: Mohamed Salah (Liverpool) – It’s unbelievable Mohamed Salah hasn’t been recognised as the Premier League’s best player since 2018, especially after his status as top goalscorer AND assister last season. Fresh off his new contract, he’ll be the heart of Liverpool’s title push.

Jack McEachen: Kevin de Bruyne (Man City) – The best player from the team I expect to win the Premier League. De Bruyne ended last season on fire and looks set to continue in the same vein, possibly aided by a tactical switch that moves him closer to Haaland.

Charlie Malam: Mohamed Salah (Liverpool) – Last year’s POTY vote ended up tighter than it looked it would be at Christmas. Salah’s Liverpool form really dropped after AFCON. This year he’s got a World Cup break so has a chance to maintain obscene numbers all year long.

Lewis Winter: Kevin de Bruyne (Man City) – De Bruyne and Mo Salah have won the award four times out of the last five seasons. It could be a straight race between the deadly duo again but De Bruyne could bag a hatful of assists following Haaland’s arrival.

Joe Krishnan: Christian Eriksen (Man Utd) – Brentford’s loss is Manchester United’s massive gain. His return last season proved he hasn’t lost his incredible vision or ability to dictate the play, and he could be the man Erik ten Hag trusts to carry out his football blueprint.

Charlie Gordon: Jesse Lingard (Nottingham Forest) – Wage-related incentives, a place in the England squad and rubbing Man Utd’s faces in it are all good reasons for Lingard to be motivated this term. On form, he will stick out like a sore thumb for Nottingham Forest and fire them to safety.

Sam Smith: Gabriel Jesus (Arsenal) – It is difficult to pick a stand-out player who obviously improves their new club. I was sceptical about Jesus to Arsenal when it happened, but he seems to really suit the way Arsenal play and will improve their goal record. 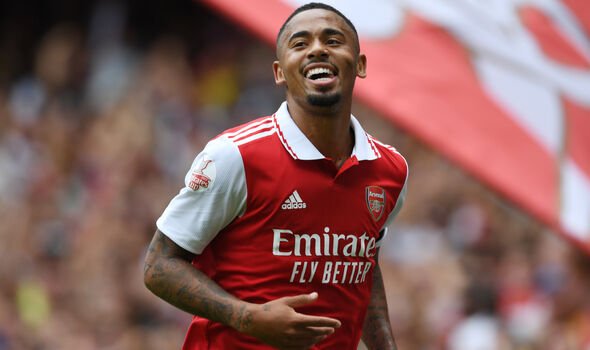 Jack McEachen: Ivan Perisic (Tottenham) – The Croatian is a perfect Antonio Conte wing-back, and could have an incredible output this season. Conte signed Perisic because he knows he can compete at the highest level in such a demanding role, and their pairing could be a perfect match.

Lewis Winter: Gabriel Jesus (Arsenal) – Jesus is a contender for the Golden Boot this season. After five years in and out of the City side, he will finally get the chance of being a first-choice striker at Arsenal.