A bottle of vintage Jose. Now drink it in

Beauty in football can take many guises. To some, Spurs’ statement victory over Man City was not attractive. Four shots on goal to 22, just 33 per cent possession and all 11 players spending the majority of the 90 minutes in their own half.

To many others, this writer included, this was an exquisite footballing plan in a season where defence, game management and basic solidity has been neglected to the extreme.

It is no surprise that both Spurs and Chelsea have shut up shop in recent weeks, and meet next week as two of the most in-form teams in the Premier League.

Fatigue, scheduling and an absence of fans to keep you honest will mean teams who favour solidity over attractive, free-flowing football should succeed this season. Mourinho has drilled Spurs to fit this type – Heung-Min Son was a right-wing-back for much of the game, Harry Kane showed the additional layers to his armour and Pierre-Emile Hojbjerg was monstrous in midfield. Even Tanguy Ndombele is back in the manager’s good books.

Mourinho walked into a film studio at Spurs and made it The Jose Show. Just look at his Instagram account.

If he succeeds at Spurs this season, against the odds, it may be his biggest performance yet.
Gerard Brand

Guardiola can’t be enjoying this. So what’s his plan?

“The Man City patterns are the same as before but the punch is different,” said Sky Sports’ Gary Neville shortly after half-time as Manchester City wilted at Tottenham. “They have to find that punch.”

Forty-five or so minutes later, the City players looked punch-drunk and their hopes of regaining the Premier League are on the ropes. Just two days after he put pen to paper on a new contract, Pep Guardiola finds himself grappling with perhaps the most difficult moment in his City career because it is far from clear where they go from here.

Where is their cutting edge? Where is their fear factor? The problem, to prolong Neville’s point, is that teams are no longer worried about what City can do to them. Their focus now is on what they can do to City. The heavyweight power of the Premier League over the last half-decade are vulnerable precisely because teams now believe that City’s lack of punch means they can soak up their pressure and then hit them hard on the break.

That, of course, is precisely what Tottenham did, just as Leicester did a month ago. By the end, City had been made to look predictable, their creativity almost entirely reliant on the genius of Kevin De Bruyne. It was a difficult and dispiriting watch.

Which begs the question: Has Guardiola picked an odd time to re-commit to City? Perhaps, but also perhaps not. First, there are those Lionel Messi links to keep in mind. Second, Guardiola’s new deal may well be the first signal that City are about to reset. He surely cannot be enjoying this season or this moment. The suspicion lingers therefore that he, unlike his team on Saturday night, is up for the fight. If this City team do not haul themselves off the canvas, it could be a brutal summer.
Pete Gill

Frank Lampard insisted Chelsea would “stay humble” for what he was adamant would be “a long, long race” at the top, but his post-match smile unsurprisingly stuck.

Newcastle were familiarly toothless in this comfortable 2-0 win and, before the international break, Sheffield United easily brushed aside themselves, but the Blues dropped points in both respective fixtures last term; this time, there has been an ominous air about their business.

Chelsea went top of the table for the first time in Lampard’s reign – for a few hours at least – after a fifth successive victory that was testament to how the rookie manager has, albeit with big bucks, elicited improvements at both ends of the pitch and quickly gelled players old and new.

The scoreline should have been greater, Timo Werner twice wasteful, but the German’s partnership with an effective focal point in Tammy Abraham pleased Lampard, as the no-nonsense work of Kurt Zouma and the reintegrated Antonio Rudiger in defence would have done, too. In front of them, N’Golo Kante spread calm, breaking up play and recycling the ball with ease but playing vertically to good effect, too. So leaky last term, the Blues’ expected goals against column is more favourable than everyone but Burnley. 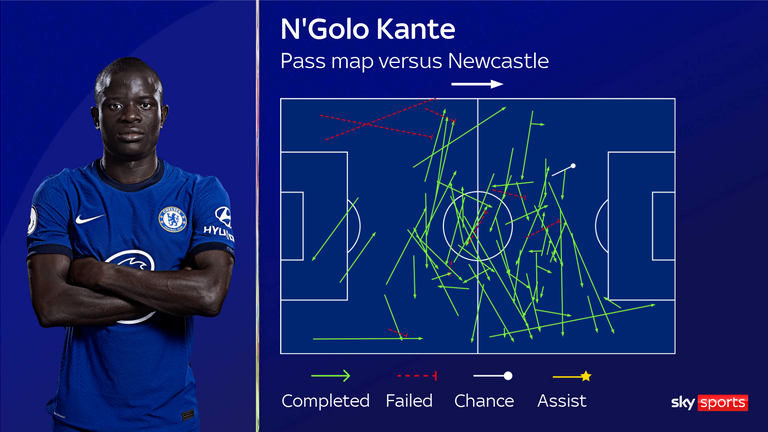 Six of their opening nine fixtures have been against sides currently in the bottom half while the next nine include Tottenham – in front of the Sky Sports cameras next weekend – Manchester City and Leicester. That prompts perspective. But, given Chelsea’s own improvements and depth of talent – combined with their rivals’ challenges in a compressed season – also plenty of optimism.
Kate Burlaga

An all too familiar tale for Newcastle

Nine games into the new campaign and there is a sense of deja vu surrounding St James’ Park.

After an unprecedented summer of spending and an undoubtedly promising start, Magpies fans were well within their rights to believe things could be different this season.

They could still be different, but the manner of Saturday’s defeat to Chelsea – a team who have won just once on their previous six trips to Tyneside – left an all too familiar feeling they won’t.

Newcastle simply failed to turn up. From the first whistle Chelsea were superior in every department and grew in confidence unchallenged, creating menacing after menacing attack which, on another day, would have yielded a far more convincing victory than the one gained.

Steve Bruce may point to injuries to key personnel, or late-returning players from international duty, but those excuses simply cannot wash for any club looking to reach that next level, and neither can a record of five defeats from their last seven home games.

There is work very much still to be done for Newcastle – how many times have we said that?
Jack Wilkinson 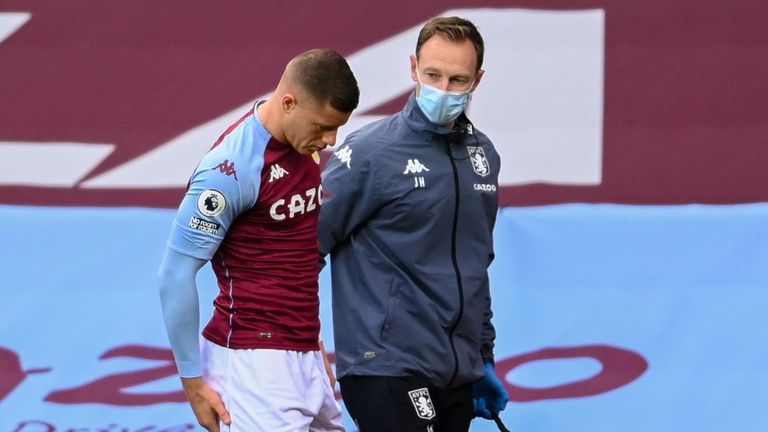 Aston Villa were the victims of a bad omen when Ross Barkley was taken off inside five minutes. He twinged his hamstring and was soon replaced by Bertrand Traore, but Villa never really recovered from his absence.

Firstly, there is the change in personnel so early on that can throw you off, but Barkley has flourished in Villa’s midfield. He brings that creativity and link-up play that has been of huge benefit since his arrival, and takes the pressure of Jack Grealish. So often in the past Villa have relied on him too much and Barkley has helped share that load.

But on Saturday, once again, Grealish was the man they turned to. He had a busy international break and needed that extra hand to help him out, sometimes looking frustrated and tired towards the end. Traore delivered some good set-pieces but did not bring much else, while Ollie Watkins look stranded up front at times, especially in the second half. They needed Barkley’s presence.

Aston Villa may be starting to feel the effects of the empty stadium too. Their defeat to Brighton was their third successive home loss and against a side who had never won before at Villa Park. One of English football’s historic grounds has always been known for its atmosphere, but Villa look to be struggling without their 12th man at the moment.

Overall, it was a bad day at the office for Aston Villa. However, if their recent form has taught us anything, it is a bad idea to bet against them and, hopefully, this is a minor blip after a strong start to the season.
Charlotte Marsh

A day of firsts for Brighton 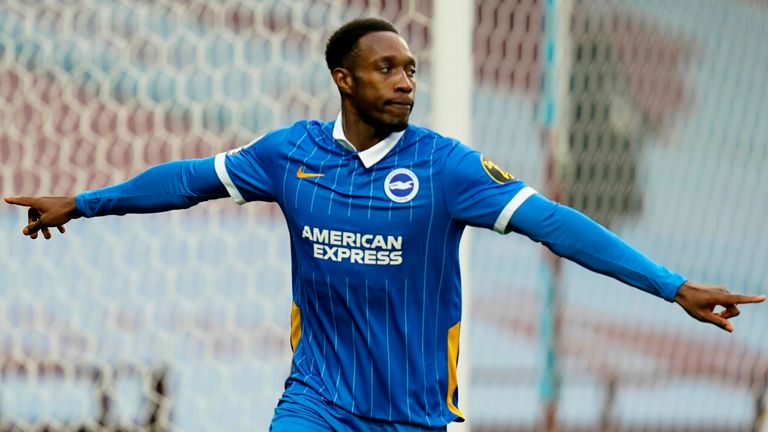 Despite playing some good football this season, Brighton have only won once but picked up a vital three points at Villa Park – a ground where they had never won before Saturday afternoon.

In their 12 visits, they had drawn three and lost nine games, with Aston Villa unbeaten in their last eight league meetings. But it all came to a halt when Solly March curled home a sweet strike in the second half, despite the midfielder surviving a late VAR scare when he was penalised – and then not – for a foul on Trezeguet inside the area.

There was also a first Brighton goal for Danny Welbeck, and a good performance to boot. It was like a throwback to a simpler time as the striker burst forward before lofting a wonderful chip over the goalkeeper. Throughout, Welbeck kept up the pressure in attack and made some vital clearances when Aston Villa were bearing down on Brighton’s box.

For a striker who has never hit double figures in the Premier League – his best tallies were nine goals in the 2011/12 and 2013/14 seasons at Manchester United – it could also be Welbeck on his way to surpassing that total. Brighton fans will certainly be hoping so.
Charlotte Marsh