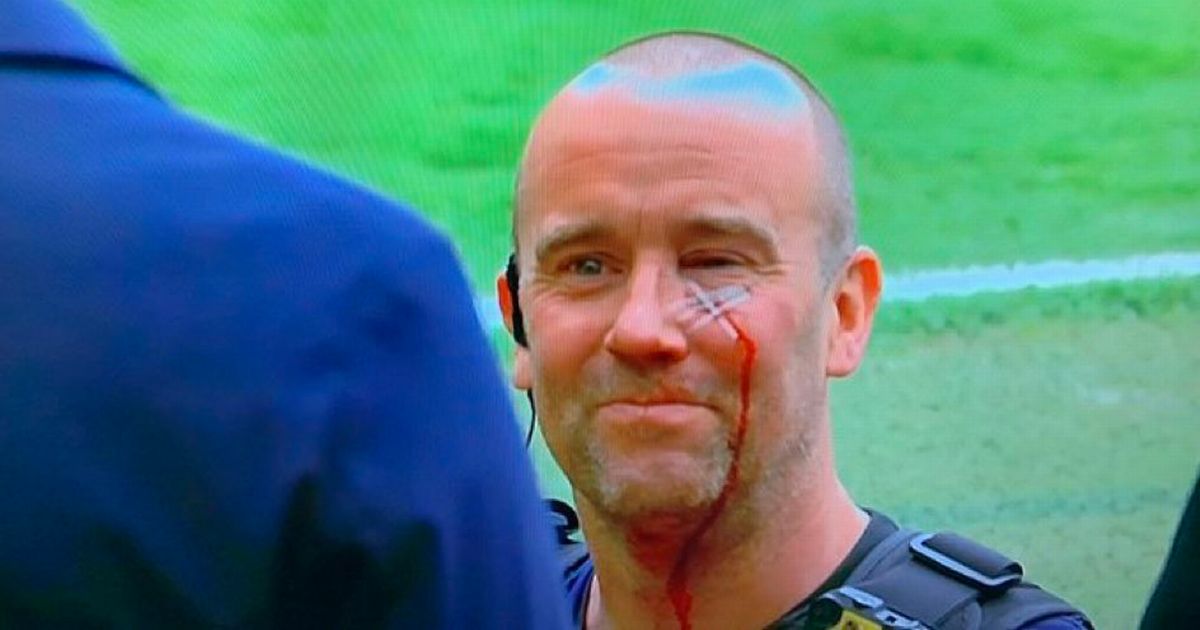 A police officer was left with a slashed face from the Manchester United protests, requiring urgent stitches.

The Red Devils’ Premier League fixture against Liverpool was forced into postponement when a group of supporters broke onto the Old Trafford pitch.

While the fans were escorted out of the ground without too much conflict, police were brought in to disperse the large crowd from the surrounding area.

But footage has emerged of one policemen who was left with a slashed face following the break-in.

The unidentified officer was filmed speaking to Sky Sports pundits Jamie Carragher and Gary Neville one the crowds had been taken off the Old Trafford pitch.

While he gave a thumbs up to the camera, the policeman had stitches across a “significant slash wound” to his left cheek.

When fans made their way into Old Trafford, they set off flares as one was aimed at the Sky Sports broadcast platform.

And the supporters made their way out of the ground in an ‘orderly fashion’ – but also took ‘balls, corner flags and camera equipment’ as they went.

Greater Manchester Police assistant chief constable Russ Jackson said: “The behaviour displayed today by those at both Old Trafford and The Lowry Hotel was reckless and dangerous.

“We understand the passion many supporters have for their team and we fully respect the right for peaceful protest.

“Plans were in place to ensure this could happen safely, but it soon became clear that many present had no intention of doing so peacefully.

“The actions of those today required us to take officers from front line policing and call in support from neighbouring forces to prevent the disorder getting worse.

“At different points, bottles and barriers were thrown, officers assaulted and people scaled the stadium structure creating risk for themselves and officers.”

The postponement was agreed by United, Liverpool and the Premier League but a date is not yet agreed.

But Ole Gunnar Solskjaer’s side could still face punishment for their fans’ actions, with fines, points deductions and sanctions still possible.