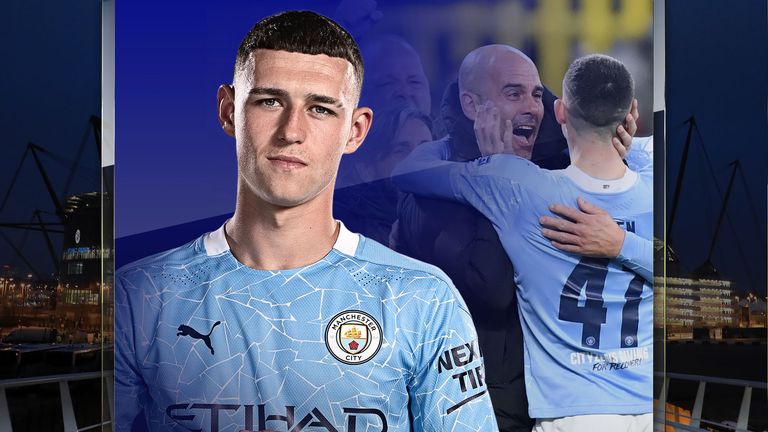 Pep Guardiola’s starting line-ups are rarely predictable but Phil Foden can feel confident of having a place in the Manchester City team to face Chelsea in Porto on Saturday.

Foden has played more Champions League minutes than any other outfield player on City’s run to the final. The 20-year-old has been outstanding domestically but it is in Europe that he has been given the most responsibility and he has thrived on it.

Manchester City would not have got this far without him. His goals in both legs of their quarter-final tie with Borussia Dortmund proved decisive and he was similarly impressive in helping Guardiola’s side overcome Paris Saint-Germain in the semis. “In the big games, this lad steps up,” said Sky Sports pundit Gary Neville this week.

It has been a coming-of-age campaign for Foden.

The academy graduate has long been held in high regard by everyone at Manchester City but his playing time was carefully managed by Guardiola following his senior breakthrough in the 2017/18 season.

His slow introduction frustrated some – especially as his former academy team-mate Jadon Sancho began to shine at Borussia Dortmund – but Guardiola never bowed to external pressure to play him more regularly and his approach has been vindicated this season. Foden has come to the fore just when City needed him.

“A lot of people were complaining about the minutes and things… I just kept believing in myself and trusting the manager,” he said this week. “I would definitely say it has paid off.”

Indeed, the Champions League final will be his 50th appearance of the campaign and earlier this month, he became the first City player to reach double figures for both goals and assists when he set up Riyad Mahrez’s second in the 2-0 win over PSG. It is no mean feat given the quality of the team-mates around him.

Foden has always been viewed as the long-term successor to his idol David Silva at City but it is on the left-hand side of their attack that he has carved out his place in the team following the Spaniard’s departure to Real Sociedad last summer.

Foden now appears to have usurped Raheem Sterling in that position and according to Guardiola, it is only a matter of time before he is able to alternate seamlessly between the two roles.

“Phil can play in both positions,” Guardiola said in February. “I have said many times he is so young.

“When he gets this balance, he will be 10 times more extraordinary as a player. It’s just a question of time.”

The prospect of Foden becoming even better should be a worrying one for Manchester City’s rivals – especially given how important to the side he already is. Guardiola talked up his “massive influence” last month and the numbers bear it out.

Remarkably, City have won 23 of the last 24 games he has started – the only exception being the recent 3-2 loss to Brighton in which they had Joao Cancelo sent off inside the first 10 minutes. 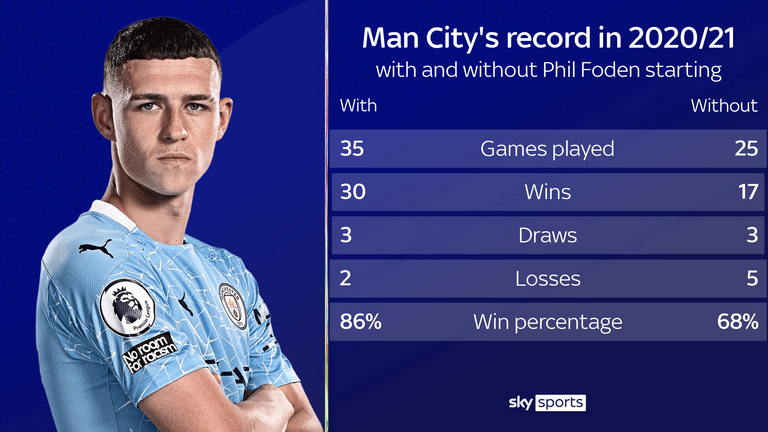 Those details will not be lost on Guardiola, while Chelsea, City’s opponents in Saturday’s final, have first-hand experience of just how dangerous Foden can be.

Foden described N’Golo Kante as the toughest opponent he has faced in a recent interview with Sky Sports – “he’s just everywhere,” he said – but he certainly succeeded in getting the better of the Frenchman when the two sides met at Stamford Bridge in January.

Foden was outstanding when cutting in from the left-hand side that day, setting up Ilkay Gundogan’s opening goal and then scoring the second himself when he swept Kevin De Bruyne’s cross past Edouard Mendy as Manchester City claimed a 3-1 win.

When he was replaced by Mahrez with five minutes of the game remaining, Guardiola clasped the youngster by the face on the touchline and congratulated him on his performance. “So proud,” the City manager told Sky Sports afterwards. “We rely on him incredibly.”

That game was just one of many in which City have directed a significant proportion of their attacks down Foden’s flank.

In fact, in the Champions League this season, 43 per cent of their attacks have gone down their left – the third-highest percentage in the competition.

It underlines the emphasis Guardiola is now placing on Foden and it would be no surprise to see more of the same on Sunday.

Chelsea have of course changed their manager since that 3-1 reverse at Stamford Bridge in January, winning both of their most recent meetings with City under Frank Lampard’s successor Thomas Tuchel. But it is perhaps no coincidence that Foden did not start either of those games. Indeed, in the FA Cup semi-final at Wembley, where Hakim Ziyech’s goal ended up proving decisive, Guardiola spoke afterwards about how his side had only begun to improve after Foden’s second-half introduction.

He didn’t have enough time to change the outcome of the game on that occasion and it was a similar story after he emerged from the bench in the 70th minute of City’s 2-1 loss to Tuchel’s side in the Premier League a few weeks after that.

But this time Foden will surely feature from the start. His early withdrawal against Everton on Sunday offered a clue in that regard but in truth, it was not needed. Phil Foden is simply too important. His “massive influence” could now help Manchester City claim the prize they covet most.