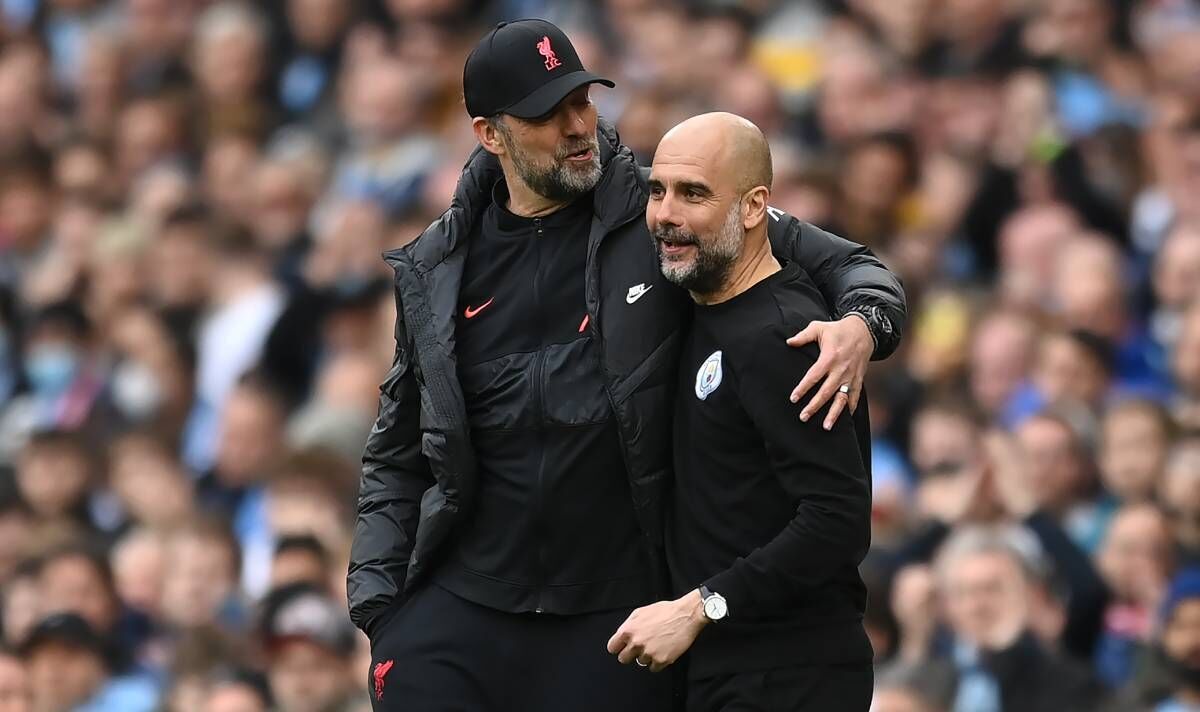 Jurgen Klopp and Pep Guardiola appear to have struck up an unlikely friendship on the touchline. But the two Premier League rivals may have an ugly side to their relationship judging by the Spaniard’s constant moans.

Liverpool and Manchester City have entertained the Premier League with a heated rivalry in recent years, but despite this Klopp and Guardiola appear to share a friendly relationship.

No other English side has got anywhere near Liverpool and City in recent seasons, as the two heavyweights are in a league of their own. And although Liverpool have a long-lasting hatred for the red half of Manchester, City have recently been added to their rivals list.

However, Klopp and Guardiola appear to be pals on the side of the pitch, hugging and engaging in friendly conversation. But it may all be an act as the City boss continues to moan about Klopp and Liverpool, proving that their relationship may not be as friendly as initially thought.

It’s advantage City in the Premier League after Liverpool dropped two points against Tottenham on Saturday, meaning that Guardiola’s side are now three points clear with three games remaining. But although it was a moment for Guardiola to savour, he couldn’t help fire a dig at Liverpool in his post-match interview.

Guardiola said: “Everyone in this country supports Liverpool, the media and everyone. Of course because Liverpool has an incredible history in European competition. Not in the Premier League, because they have won one in 30 years, but it is not a problem at all.”

His outburst may be off the back of a nasty Champions League exit for City, as their European hopes were shattered once again. Liverpool on the other hand will face Real Madrid for a shot at winning yet another European crown.

But it’s not the first time that Guardiola has fired shots at Liverpool, and he’s been guilty of also poking fun at Klopp in the past, making their ‘friendship’ seem even more for the cameras. Sure, greatness can appreciate greatness and the pair clearly respect one another. But Guardiola definitely is anything but friendly when speaking about Liverpool.

Klopp has been involved in an ongoing row with fixture scheduling for some time, as the German is used to a lot more leniency in his homeland. And Guardiola recently broke his silence on the situation and offered Klopp an alternative if he’s unhappy.

“If I’m not satisfied, I go home and don’t be manager of Manchester City. I go to another league in the Maldives, the Maldives league, and play one game a week and I’m so comfortable under the coconuts. It would be so perfect, but it’s not the case. You’re playing at 12.30? I’m sorry Liverpool, but I’m not involved with that.”

And Guardiola also called out Klopp for ‘finding excuses’ too. “It’s finding excuses [to moan]. When I complain to my players or when you complain, you find an excuse and when you have excuses you cannot move forward.

“Excuses are the worst in the world in football, in sport. So I’m not judging what the other managers said but the comment, what Jürgen said – “two weeks off” – the purpose I don’t know. You have to ask him.

To follow on from Guardiola’s rant aimed at the media for ‘supporting Liverpool’, the Spaniard has also thrown his toys out the pram in the past for some of Klopp’s stars being handed awards. Mohamed Salah has recently bagged two player of the season awards, and is the overwhelming favourite to claim the prestigious PFA award too.

More often than not the award is given to a player from the winning side, but it doesn’t always work out like that. And Guardiola has moaned about these awards being held for ‘Liverpool players’ in the past. “The winner will be from Liverpool. When we won the Premier League the Liverpool players won.

“When they win the League, I’m pretty sure they are going to win the Player of the Season. These awards are always for Liverpool.”

Of course, friendship and business are seperate issues, but Guardiola’s comments can’t go down well with Klopp. With the intensity rising between the pair, their ‘friendly’ relationship may not stay that way for much longer, if it still remains that way.