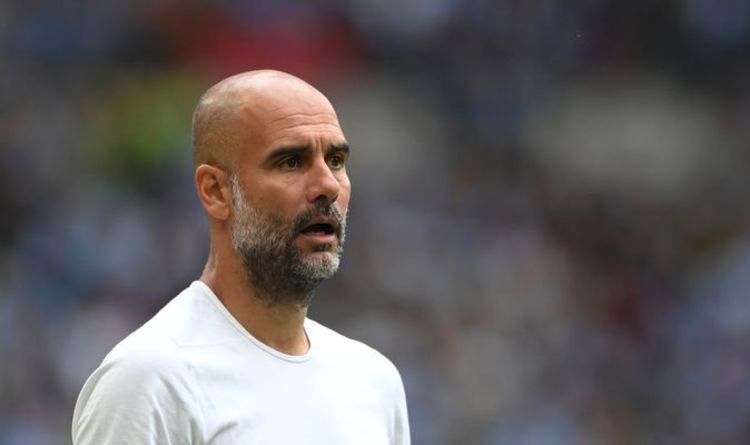 Pep Guardiola reportedly has a new big-money transfer target after missing out on landing England captain Harry Kane this summer. The forward sensation had looked certain to move to the Etihad but Manchester City’s approaches were rebuffed by Tottenham chairman Daniel Levy.

The Citizens are believed to have offered a staggering £120million for Kane, but Levy refused to budge.

Guardiola clearly has cash at his disposal and will now turn his attentions elsewhere as he chases an elusive first Champions League trophy with City.

But the Spaniard will instead look to address another problem area before going back into the market for a striker.

Guardiola is short of options at left-back and is currently monitoring AC Milan star Theo Hernandez, according to The Sun.

Benjamin Mendy began the season on the left side of Guardiola’s defence but has since been suspended by the club.

Joao Cancelo, who is more suited to the right, was selected in the position for City’s back-to-back 5-0 Premier League thrashings of Norwich City and Arsenal and was also utilised there at times last season.

Oleksandr Zinchenko, meanwhile, has also covered the problematic position in recent years but is a midfielder by trade. And Guardiola has also called upon Nathan Ake to fill the void.

City are in desperate need of an out-and-out left-back and Hernandez could be the man Guardiola turns to.

The 23-year-old made his France debut on Tuesday night in his country’s 2-0 World Cup qualifying victory over Finland.

And the defender certainly appears to be delivering on his huge potential.

Hernandez progressed through the Atletico Madrid academy and impressed during a loan spell at Alaves as a teenager.

His form caught the attentions of Real Madrid, who were happy to meet his £20m release clause to take him to the Bernabeu as a 19-year-old.

But the Frenchman failed to claim the left-back spot at Los Blancos and had a loan spell at Real Sociedad before AC Milan paid around £18m to take him to Italy two years ago.

Hernandez has impressed in Milan and has become revered for his attacking ability.

Last season, the left-back scored seven goals and assisted six more in 33 Serie A games as his side finished second in the table.

He has scored or assisted 29 times in 83 appearances for the San Siro side and the lure of his attacking impetus may prove too tantalising for Guardiola to ignore.

City will have to shell out mega-money to land their man, with the Italian side apparently valuing Hernandez at around £68m.

But it will be money well spent if the player can solve a problem which must now be giving Guardiola a perpetual headache.