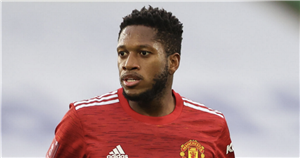 Paul Scholes is not the biggest fan of Manchester United midfielder Fred after he raged at the Brazilian on TV.

United have one foot in the Europa League final with a 6-2 lead over Roma but they did trail 2-1 at half-time.

Edin Dzeko had given Roma the lead and Old Trafford legend Scholes was furious at Fred for not picking up Lorenzo Pellegrini who set up Dzeko for the easy tap in.

"That's what Fred is in the team for," Scholes began criticising the defensive midfielder at halftime on BT Sport.

"He's in the team to stop this type of thing from their best midfield player. He gets in behind them.

"Look Fred please stop that (cross). He contributes nothing going forward. That's his absolute job – to stop that type of thing and he's left wanting again."

Manager Ole Gunnar Solskjaer was asked about Scholes' comments and fired back a response over his team selection choices.

"It's easy up there thinking who should play, who should not play," he said in his post-match interview.

"Maybe those [Scholes and Owen Hargreaves] two should leave players out themselves and pick a team with balance."

On his team's chances in completing the job in the second leg, he said: ”No we don't feel the job is done but we feel it was a good job done."