When you are a young player it is all well and good being picked up by the biggest club in your league.

But if you want to develop your game and reach your potential – or at least not have your progress stunted – then you simply have to play.

Just ask Western United's Connor Pain, the one-time forward who has been converted into a wing-back in his brief period at Caroline Springs under Western coach Mark Rudan. 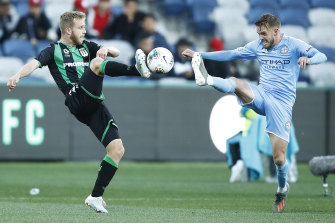 Pain is, along with Besart Berisha, one of two players in the Western squad who have played for Sunday's derby rivals Melbourne Victory. He is far less celebrated by the Victory faithful, not surprisingly as he competed alongside bigger names and was on bench many times in his 61 appearances across three years.

It was, in the end, frustration with his lack of opportunities which led him to leave Victory to join the Central Coast Mariners and begin the journey that has taken him back home to Victoria to the A-League's newest club.

"The players they had then, I was probably going to be a bit part player and continue to be so. I thought it was in my best interest at that age to try to move on and play regular football, which is what the Mariners were able to offer me," says the 26-year-old.

"I ended up going there and playing 70-odd games from the start. For me, it was the best thing I could have done [for] my development and that's why I decided to leave with a year left on my contract from Victory.

"Archie [Thompson] was still there, Marco Rojas, James Troisi came in, he was playing wide-ish. They also had Kosta Barbarouses. It was difficult to crack as a kid and you are always wondering, 'When am I going to get their chance?' So it made sense to leave and look for somewhere else."

But why the Mariners? The Gosford club had already begun the decline, which saw it languish at the foot of the table for several seasons.

"When you still have a year left to run on your contract, you have to fulfil the wants of your current club, and I know Victory wanted a player in return and that ended up eventuating in Mitch Austin coming the other way," he says.

"It was the best for both parties and all the pieces fell into place. It was a way to try and reinvigorate my career.

"I knew that if I sat there and didn't play the next year at Victory maybe my options would be limited more, so it was just a chance to keep my professional dream alive." 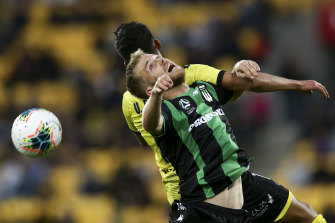 Game time has been a motivating factor for Connor Pain. Credit:Getty Images

Losing regularly can take its toll, mentally more than anything. But Pain said the Mariners' poor on-field record did not worry him.

"I think it did help massively playing regularly. As a 20-21-year-old getting game time is the most important thing you can get as a footballer," he says.

"It's all well and good being at one of the supposed bigger clubs, but if you are not playing regular football there's not much to sell you on. So for me to go up there and play regularly was the most important thing for my career, even though it was challenging not winning that many games."

"I needed a change, to move on. And the idea of coming to Western United, a new club and new franchise was really appealing to me. To work with the boss was massive," he says.

"I had a different role, which was difficult to learn and adjust to at the start. I had to learn defensive duties but now I am starting to grasp the concepts a lot more and it's enjoyable for my football.

"You saw what Mark Rudan did with Wellington Phoenix and I spoke to the boys over there that I knew and they couldn't speak more highly of him, so it was definitely a big factor in coming to Western United.

"To come home was another, but the football was the driving force. I wanted to go somewhere for career development." 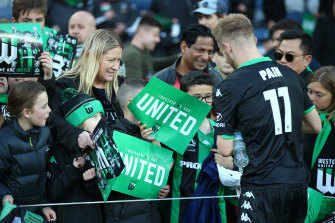 The last time these teams met Western United posted the best win in its short history, coming from 2-0 down early on to win 3-2.

The memory is still bright for Pain.

"It was our best performance. It was a weird one because we took all the chances we had, the comeback and the fighting spirit we showed was fantastic," he says.

"We need to work out why it's not gone the way we wanted it to the last three weeks and work out a solution for this weekend."