Doha: As with so many Australian kids, the feats of the ‘golden generation’ at the 2006 World Cup in Germany were a seminal moment in the life and times of Mathew Leckie.

Had Tim Cahill not struck twice against Japan, had John Aloisi not sealed that magical first win in Kaiserslautern, had Harry Kewell not scored the late goal that secured a draw with Croatia and a spot in the round of 16, Leckie might be kicking a ball of a different shape. 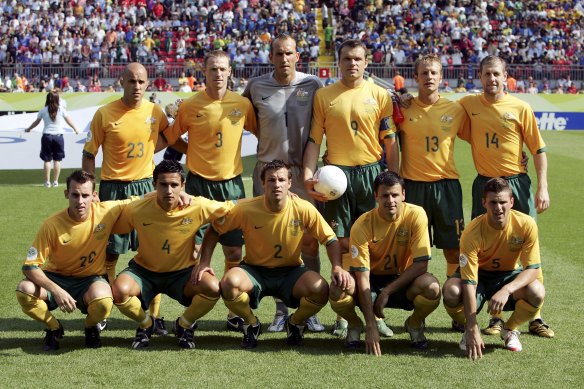 The ‘golden generation’ made it into the round of 16 at the World Cup in 2006 – now the kids they once inspired are in the Socceroos and could be about to match them.Credit:Getty

“The World Cup and us Socceroos really bring the nation together,” the Melbourne City winger said.

“When I was younger, growing up in an AFL environment with my family, one thing that did bring my family to follow football was the national team and the World Cup.

“It’s huge for the sport … I’m sure when [kids] watch the telly, they see the atmosphere and how big the World Cup is, it could be just one of those things that clicks in their head and says ‘I want to be a footballer’, rather than an AFL player or something like that.”

Sixteen years on, Leckie and his teammates — all of whom, save for one or two with a Scottish accent, were also inspired by that 2006 run — have the opportunity to match the achievements of their heroes and influence a whole new generation of aspiring footballers. 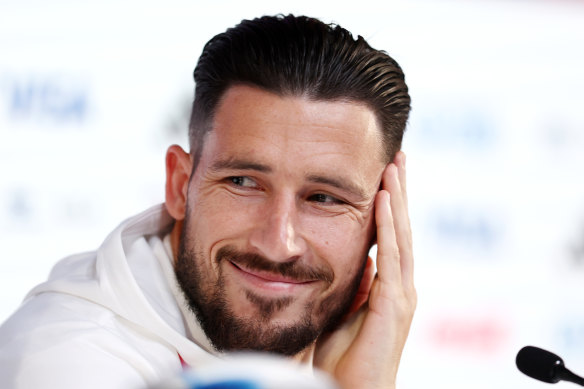 Mathew Leckie grew up in an AFL family, but the power of the Socceroos and the World Cup shaped his athletic future.Credit:Getty

It’s been a lean few years for Australian football. Unlike 2006, there are very few male players breaking through into any of Europe’s top five leagues, the development pipeline has dried up, the Socceroos lost some of their lustre in the eyes of the general public after struggling through two arduous World Cup campaigns without success at the tournament proper, and the A-League’s appeal — both domestically and abroad — has dropped away as a result.

All along, bigger, better-funded sports have had first crack at the country’s best young athletes, and football has had to make do with what was left over, or the precious few who swum against the tide.

Isn’t it funny what a single win can do?

“We can create something special, as the ’06 team did,” Leckie said.

Australia’s 1-0 victory over Tunisia on Saturday night has put them on the cusp of getting out of their group for just the second time in the nation’s World Cup history. That game was watched by 1.7 million people back home, and the scenes of utter jubilation at a packed Federation Square in Melbourne and other live sites across the country are fuelling the Socceroos as they look for a win or draw against Denmark on Thursday morning (2am AEDT).

“If you’re not Australian, and you don’t know, football in Australia is probably the fourth or fifth main sport after AFL, rugby league, rugby union, cricket, and then there’s football … they call it soccer, but football. To leave a legacy is huge.

“In 2006, and what that generation did, I was very fortunate I was there as an assistant coach with Guus Hiddink and experienced that as well, and all the kids that grew up are these kids, this generation — they were 10 years of age, watching these guys do what they did in 2006.

“When you sit around now, even in the lunch room, this generation is talking about emulating the 2006 squad and achieving the same goals that, when they were 10 years of age, they saw. It’s about putting the game on the map a bit more … our ambition is to get two wins, and have the most wins ever at the World Cup.

“How crazy the place is going, it just shows that football is alive and well in Australia. [But] putting smiles on Australian faces once is not enough. Let’s do it some more times.”