OLIVER HOLT: Back at Exeter 12 years after the death of his father, football has turned into a game of emotion for Jay Stansfield and his family… with the teenager wearing the number nine that his dad who has a stand named after him previously wore

Jay Stansfield sits at a trestle table on a little patch of grass at a motorway service station and blinks back the sharp autumn sunshine.

He glances now and again at an old couple, fussing over their dog in the car park as they pour water into its tin bowl, and talks softly over the steady hum of vehicles rushing north and south through Devon along the M5.

Stansfield is 19. He is polite and thoughtful and reflective beyond his years. At Fulham, for whom he made his Premier League debut against Wolves at Molineux last month, they speak highly of his attitude and his character and his hunger to learn. There is something else about him, too. Sometimes, he wears the air of a young man who is carrying a burden. 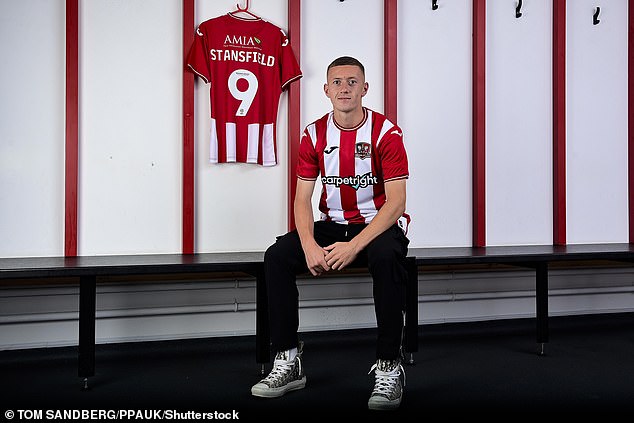 Now and again, he acknowledges that himself. He is trying to fix something that was torn apart when he was a kid. ‘It changed me massively,’ he says. ‘Once it happened, I was broken and my whole family was broken. The aim in my head from then on was to make them proud and give them the life that they deserve. To mend it.’

Twelve years ago, Jay’s father, Adam, Exeter City’s centre forward and every supporter’s favourite player, died of bowel cancer at the age of 31. The fans loved him because he never gave up on anything. Even in the later stages of his illness, when he was weak after chemotherapy, he turned up for the first day of pre-season training and ran with team-mates.

In the days after his death, Exeter’s grieving fans turned their St James Park ground into a shrine to the player they called Stanno. The Big Bank, the home terrace behind one of the goals, was festooned with scarves and bouquets of flowers and cards. It was a sea of mourning. Jay, the oldest of Adam’s three sons, was seven when his father died.

It was impossible not to be moved by the outpouring of love for Jay’s dad. When I went to the stadium to see the tributes back then in 2010, I made a note of some of the messages. 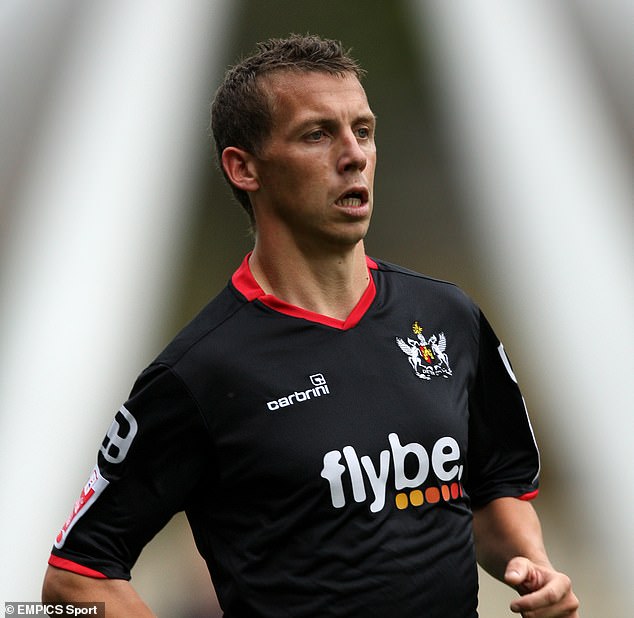 A 10-year-old boy called Josh had written: ‘Adam, you were such a great player for all your teams. You were my favourite player and you always will be. You will never be forgotten. My favourite goals were the 2 you scored against Southend United.’

Another message had been taped to one of the stanchions. ‘Adam,’ a lad called Thomas had written alongside a picture he had had taken with the striker, ‘you were my favourite Red Army player. Thank you for sending me a birthday card each year. I shall remember the good times I spent with you when I was mascot. I will miss you so much.’

Even now, the supporters still sing about Stanno. One of the stands at St James Park has been named after him and the chant that honours him rings out at home games. ‘Sing a song for our Stanno,’ it goes, ‘and we will never let you go, cos you’ll always be, at City with me.’

The League One club retired Adam’s No9 shirt after he died. No one had worn it since. Until earlier this month. Then Exeter decided they would make an exception for a new signing. Jay had spoken with Marco Silva, the Fulham boss, and both had concluded he should go out on loan for the rest of the season. He went to Exeter. The transfer announcement video went viral and attracted more than three million views. The club had a No9 with Stansfield on the back again. 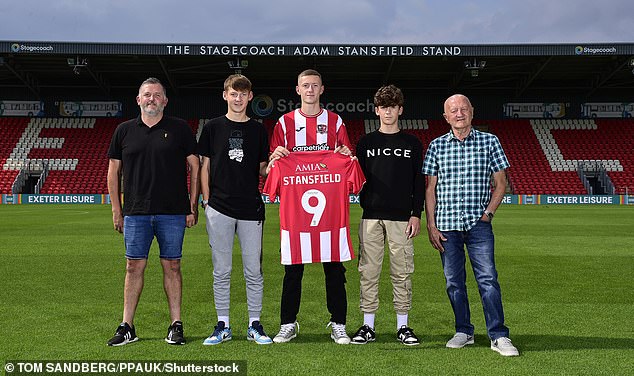 Jay understood the emotions that would be unleashed. His mum, Marie, and his brothers still live nearby in Tiverton, where he grew up. He had played for Exeter’s age-group teams from when he was six until Fulham offered him a scholarship, followed by a two-year professional deal, when he was 16.

The Exeter manager, Matt Taylor, played in the same team as Jay’s dad for three years. Jay knew he would be wanted. He knew what his dad meant to the fans. And so he came back. When he got out of his car before his Exeter debut at home to MK Dons this month, the first thing he heard was a group of fans chanting his dad’s song. ‘Sing a song for Stanno,’ Jay repeats. ‘It made me feel emotional hearing it.’

When he was brought off the bench in the second half, there was a huge roar. ‘When I ran on the pitch, they were singing ‘there’s only one Adam Stansfield.’ he says.

‘I was so young when he died and I wish I had more memories and I wish I’d been able to see him play more but the first thing I remember about our house was a football. I remember going to the game on a Saturday and watching him play. I remember a couple of holidays we had in France and the beach and a beach ball and a football. There was always a ball involved. 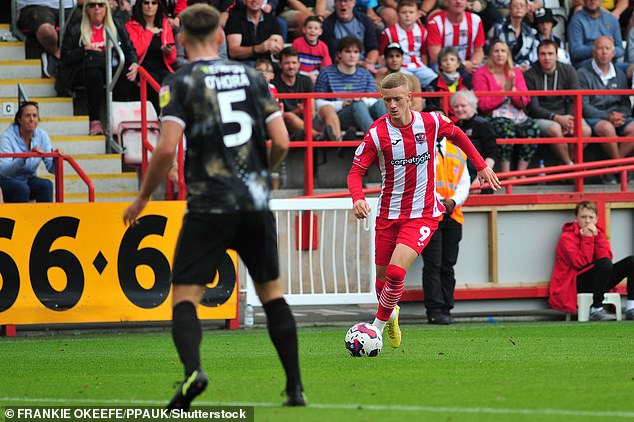 ‘I wish he was around now for all sorts of reasons. I wish he was there for advice because he knew what it was like to be in my position. When I moved to Fulham, it hit me more then, realising what I could have had. When I’m playing with people who are older, it brings back memories. It makes me upset when I think about him not being here.

‘Sometimes, I’m sat in the car and maybe I’ve had a bad session or a bad game and I need someone to call, someone who knows the game, someone I can ask what I can do better and what I can do next. And I wish he was there. Sometimes, footage of him playing pops up on Facebook, then I’ll sit and reflect on what actually happened.’

Jay’s mum comes to every game. ‘For me to go out and wear the Exeter No9 shirt and for her to watch it…’ he says, his voice trailing off. ‘When I made my Premier League debut, for her to be there was important because these are things she’s worked hard for, too. There was no one else around to do what she’s done.’

He is keen to help Exeter climb up League One and hoping to return to the Premier League next season. In the meantime, he is building a special collection at the home he still has in Fulham.

‘I’ve got all of dad’s shirts hanging in frames on the wall in my apartment,’ he says. ‘I’m getting mine done now and I’m going to put them next to each other. His shirts, my shirts, the things he achieved, the things I’m achieving.’

There is something beautiful about that image of those shirts hanging side by side. Sing a song for our Stanno. We’ll never let you go.