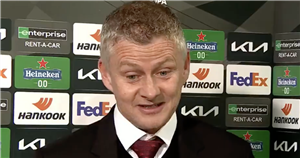 Ole Gunnar Solskjaer called out Paul Scholes after his Manchester United side came from behind to demolish Roma in the Europa League on Thursday.

The Red Devils went ahead through Bruno Fernandes after just 10 minutes, but the Serie A side hit back through Lorenzo Pellegrini and Edin Dzeko before the break.

Scholes then said that United needed to make changes – but Solskjaer trusted his starting XI and they ran riot through Edinson Cavani twice, Fernandes for a second time, Paul Pogba and Mason Greenwood.

The winning boss was then asked about the comments of his old team-mate, and he didn’t take the suggestion that he had got things wrong from the start too kindly.

Solskjaer told BT Sport: ”No we don't feel the job is done but we feel it was a good job done.

"We know they've got quality, they scored two goals with two chances. It was the same with Ajax. In Rome a team will get four or five chances against you.

"Very pleased with the response. Great second half."

Solskjaer was then asked about the comments of Scholes, who said that the midfield needed to be altered at the break with United trailing 2-1.

He said: "Yeah. You can say that. It's easy up there thinking who should play, who should not play."

Adding when asked why he chose not to alter his side: ”Because it's a very good team, work really well against Tottenham. I said before Mason should be disappointed not playing but it's about the balance.

"Maybe those [Scholes and Owen Hargreaves] two should leave players out themselves and pick a team with balance."

United’s 6-2 lead before the second-leg has given them a golden chance of reaching the final, and Solskjaer knows he has the players to go all the way.

"Paul's position is very good in that position because he's allowed that freedom then you've got the foundation behind them. Marcus, Edi, Bruno, Paul against any players will create chances.

“So it's about taking them.”