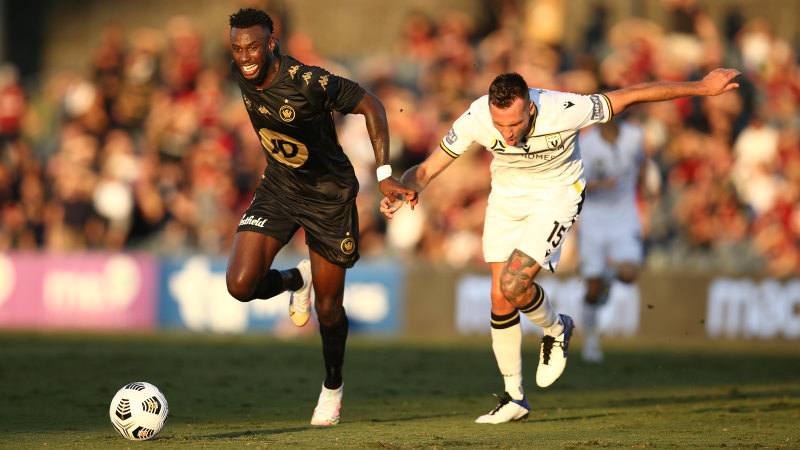 The second edition of Sydney’s western suburbs derby was – just like the first one in the A-League’s opening week – a match for the ages. 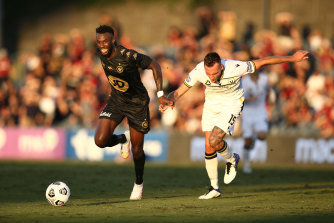 The Bulls twice took the lead at Campbelltown Stadium, with defenders Aleksandar Jovanovic and Aleksandar Susnjar both scoring from corners in each half, but they were unable to hold off a late surge from Carl Robinson’s Wanderers, who started poorly but came home with a wet sail and could have easily taken all three points.

Sandwiched between those two Macarthur goals was a pearler from Graham Dorrans, who wore the captain’s armband for the Wanderers and capitalised on a series of slip-ups at the back for the hosts with a screamer from long distance – his first goal in the A-League.

Seven minutes into the second half, the Bulls were trying to recycle possession after a corner when Benat Etxebarria slipped over as substitute Lachie Rose directed a pass his way.

Dorrans pounced on the loose ball, cleared a sliding challenge from Ivan Franjic and looked up as he neared the halfway line, spotting goalkeeper Adam Federici a long way off his line.

The veteran midfielder held his nerve and delivered an expert chip from at least 35 metres, which sailed over the hapless Federici and sent visiting Wanderers fans in the nearby corner into raptures.

The Bulls hit back six minutes later when Susnjar’s header off Loic Puyo’s corner rattled the crossbar and went in to restore their lead at 2-1.

But Western Sydney were up and about, and squared things again in the 70th minute with another moment for the highlight reel.

It was another corner, but this time James Troisi’s delivery found Tate Russell at the near post, and the lively wing-back threw his leg out in an attempted scorpion kick reminiscent of Riley McGree’s memorable goal for Newcastle in 2018.

This time it wasn’t a goal but a beautiful assist, with Cox able to ram Russell’s flick-on home with his head from close range.

Just moments earlier, a mad goalmouth scramble saw Bruce Kamau, Cox and Russell all denied in the same comical passage of play by Federici, a defender’s body and the crossbar, respectively – and while both teams did everything they could to find a winner, neither was able to do so.

It was a fair result, with the Bulls winless through their first four matches at Campbelltown, while the Wanderers are unbeaten in their last five outings – their only defeat this season coming against Macarthur in the new club’s inaugural match late last year.

The Bulls made a storming start to the match, taking a deserved lead in the 18th minute through a deft Jovanovic header.

Benat’s corner-kick delivery picked out Jovanovic perfectly, with the lanky centre-half able to beat his marker Ziggy Gordon and crane his neck to flick the ball into the far corner.

It was no less than they deserved, and the Bulls were millimetres away from making it 2-0 just before the break when Matt Derbyshire’s thumping effort was disallowed due to a marginal offside.

The Wanderers had a couple of brief moments of joy in the first half, the best of them coming in the 41st minute as Russell cut inside and forced a terrific diving save out of Federici – but they would explode into action in the second half.