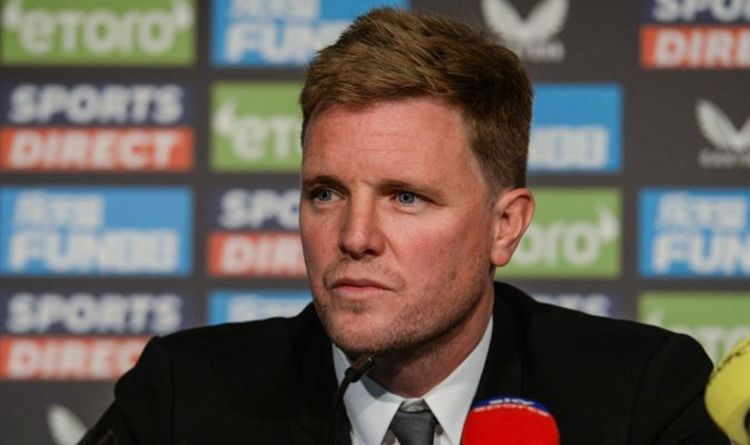 Newcastle manager Eddie Howe has urged the club’s supporters and wider media to avoid speculating over January transfer targets in order to protect the morale of his current squad. Howe will be tasked with leading Newcastle’s bid for Premier League survival over the coming months after he was officially confirmed as Steve Bruce’s permanent replacement earlier this week.

Howe has signed a two-and-a-half-year deal at St James’ Park and is the first manager to be appointed by the club’s new Saudi-led ownership group.

The former Bournemouth boss will undoubtedly be looking to aid Newcastle’s hopes of avoiding relegation by using the January market to his advantage when the mid-season transfer window rolls around.

A number of high-profile targets have been linked with the Magpies as of late following the recent completion of their lucrative multi-millioound takeover.

The consortium in question is reportedly worth in excess of £300billion due to the involvement of the Public Investment Fund, which represents the sovereign wealth fund of Saudi Arabia.

As a result, the likes of Barcelona playmaker Philippe Coutinho, Paris Saint-Germain striker Mauro Icardi and Porto winger Luis Diaz have all been tipped to join the revolution at Newcastle by pundits and fans alike in recent weeks.

However, Howe has asked for a stop to the countless reports and rumours, insisting that Newcastle’s current group could easily feel threatened by the speculation over their respective futures.

“I see all the reports linking Newcastle with this player and that player, it doesn’t do any good for the players who are here reading that,” the Magpies boss told reporters.

“I would urge people not to speculate too much. For me it’s the team in the here and now, that is my only focus.”

It remains to be seen whether Howe will be successful in his new role at Newcastle, who are facing the possibility of a third stint in the Championship in 13 years if they fail to save their campaign.

Howe was originally believed to be a peripheral candidate for the Magpies job, but managed to work his way ahead of the competition after winning over the club’s owners during the interview stage of the recruitment process.

The 43-year-old also revealed that he sees Newcastle as the perfect destination to resume his managerial career after spending more than a year away from the dugout since leaving Bournemouth last summer.

“It feels fantastic to be head coach, it’s an incredible moment in my life,” added Howe.

“Judging by the reaction I’ve had it’s been a positive start. I’d like to thank everybody here. It felt right and it felt like a perfect fit.

“Yes, I’ve had other options. I feel energised and ready to start work. I am confident we can avoid the drop.

Howe will be desperate to get off to a winning start with Newcastle when Brentford make the long trip from London to St James’ Park after the international break.

The Magpies will be hoping to pick up some much-needed points from their next few outings, with Norwich City and Burnley also set to face the Magpies before the start of the festive period.