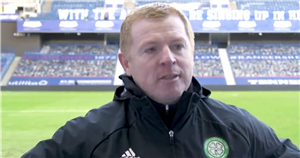 Hoops captain Callum McGregor looped a 70th-minute header into his own goal, giving Steven Gerrard’s side their 20th win of the season and going 19 points clear of their rivals.

But the key moment of the game came eight minutes earlier when centre-back Nir Bitton was shown a straight red card for hauling Alfredo Morelos to the ground.

And the Celtic boss was left furious with referee Bobby Madden for the decision to reduce his side to 10 men.

Speaking to Sky Sports after the defeat, Lennon said: “I’m bitterly disappointed. We were the better team and I think the referee has made the wrong decision and it’s changed the course of the game.

“It’s not a sending off, it’s a foul. We’ve got [Kristoffer] Ajer coming around on the cover, Morelos is in a wide position.

“It’s not a clear and obvious goalscoring opportunity. He might get a shot off but he’s certainly not clean through on goal and I think he’s too quick to get the red card out.

“I’m really proud of the performance. I thought we were outstanding up until the red card which changed the course of the game.

The result piles on the pressure for the Celtic boss, who saw his side crash out of the Europa League while Rangers remain unbeaten.

But the 49-year-old claimed that his side put in a good performance at the Ibrox.

Lennon added: “Nir’s not done great, he’s got himself in the wrong body position but he’s not clean through as Ajer was on the cover and we got really unfortunate with the goal as well.

“We kept going and our goalkeeper had nothing to do today, nothing. We were really pleased with the first-half performance and we needed the goal to top it off.

“We felt the goal was coming until the red card which changed the course of the game.

“It would be a hell of a goal to beat [Vasilis] Barkas from there with Ajer coming in.

“You can debate it all you want. For me, in a game of this magnitude, it’s a really rash decision from the referee.”