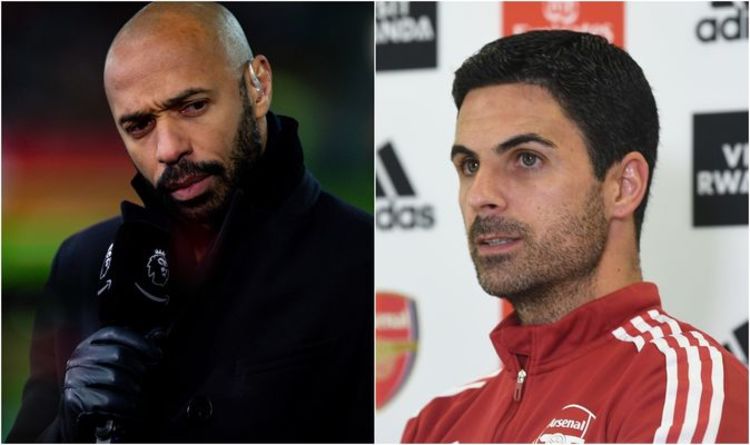 Arsenal boss Mikel Arteta has referred to Thierry Henry’s criticism as ‘just another opinion’ in a take which will surely raise eyebrows among the Gunners faithful. The north London side have experienced an up-and-down start to the campaign which saw them head into the first international break rock bottom, although this time round they are marginally more comfortable in mid-table.

Arteta’s dismissal of Henry’s comments were bold, considering that the Frenchman is up there with the club’s all-time greats.

But with a ridiculous showreel of screamers, a catalogue of memorable moments and 175 Premier League goals under his belt, Henry’s voice perhaps carries more weight than the Spaniard is letting on.

This week, the former striker questioned whether Arsenal were heading in the right direction under their current boss.

They kicked off the season in disastrous fashion, losing their first three matches without scoring a goal to sink to the bottom of the league.

However, they went on to win their next three and, after a draw with Brighton, headed into this international break sitting 11th.

Although things have turned around, mid-table is not where the Gunners should feel at home, and with just give goals scored in seven league games Henry could be right to ask questions.

His comments may have been poorly timed though, given that Arteta was recently awarded the Premier League’s Manager of the Month award for September.

When quizzed on Henry’s comments, Arteta admitted: “I haven’t [read them]. I am just hearing them from you.

“It’s just another opinion, you have to respect that.”

Despite an upturn in fortunes and a managerial accolade to show his doubters, Arteta’s only truly convincing victory of the campaign remains in the North London Derby.

Although it was the ideal match-up in which to prove a point, he will need his side to put in another impressive display to truly shrug off any speculation around his future.

That will be easier said than done against an unpredictable Crystal Palace side.

In batting away the comments of one Gunners legend, he will have to face another on Monday night when Patrick Vieira stands in the opposite dugout.

The ex-Nice boss has set out his team far differently to his predecessor Roy Hodgson, and although results have been hit and miss, his side have been superb in flashes.

Arteta may need all his managerial nous to put points on the board if the harmonious Palace turn up, otherwise Henry will not be the only one asking questions.