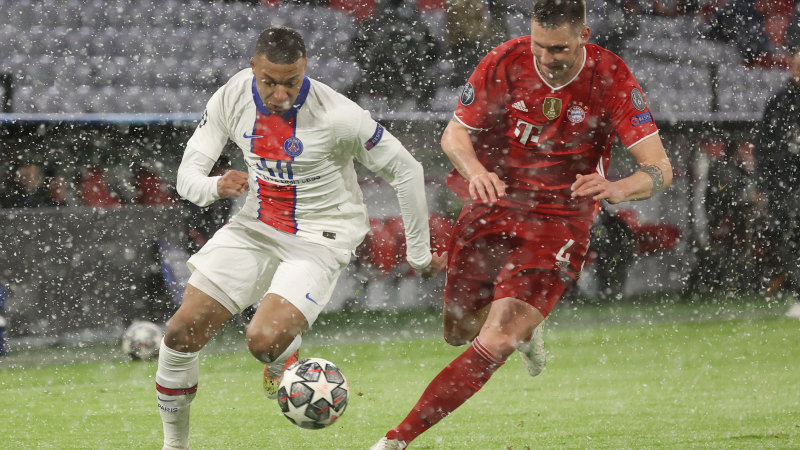 Kylian Mbappe scored twice to lead Paris Saint-Germain to a 3-2 win at defending champions Bayern Munich in the first leg of their Champions League quarter-final on Thursday (AEST).

Mbappe was a constant threat while Neymar had two assists as the French champions responded to their 1-0 loss to Bayern in last year’s final by seizing the advantage going into the second leg in Paris next week. 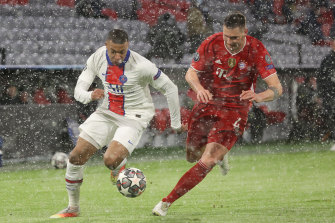 Marquinhos scored the other goal as the visitors went 2-0 up inside the first half hour, but the PSG captain went off injured shortly afterward and Bayern responded through headers from Eric Maxim Choupo-Moting and Thomas Mueller.

Mbappe sealed the win with his eighth goal of the competition in the 68th. The visitors had four shots on target altogether.

“I think it was efficiency. We managed to score with almost all of our opportunities, and we managed to defend well as a team, even if it’s difficult against Bayern Munich,” Mbappe said. “But there’s a second round at home and we’ll have to win again if we want to qualify for the semi-finals.”

Bayern had 31 efforts at goal and clearly missed Robert Lewandowski’s accuracy. The Poland star is the Bundesliga’s top scorer with 35 goals in 25 appearances, but he returned from the international break with a knee injury. Bayern was also without forward Serge Gnabry because of a positive COVID-19 test.

“Unfortunately it wasn’t as decisive in front of goal as we normally are,” said Bayern coach Hansi Flick after his first Champions League defeat since taking over in November 2019.

“The efficiency wasn’t good. But still I’m very satisfied with the performance of the team, the way they played.”

The visitors also had absences due to COVID-19, with Marco Verratti and Alessandro Florenzi both infected. Coach Mauricio Pochettino was also without forward Mauro Icardi and the suspended Leandro Paredes, as well as Layvin Kurzawa and former Bayern player Juan Bernat. 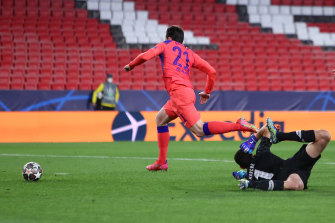 Solid defensively and precise in attack, Chelsea took a big step toward returning to the last four of the Champions League by defeating Porto 2-0.

Mason Mount and Ben Chilwell scored their first Champions League goals to give Chelsea a great chance of making it to the semi-finals for the first time in seven years.

Mount scored after a nice turn past a defender at the edge of the area in the 32nd minute and Chilwell added the second following a blunder by Porto’s Jesus Corona in the 85th. The goals came off the only three attempts on target by Chelsea in Seville, where the game was played because of travel restrictions related to the coronavirus pandemic.

“We knew it was going to be a tough game,” Mount said. “We know how hard they are to play against. We kept going and secured a good win, but that’s only half the tie. The job’s not done, they’re going to fight next week and we’ll have to give our all again.”

Next week’s second leg will also be played at Sevilla’s Ramon Sanchez-Pizjuan Stadium. Porto was considered the home team on Wednesday.

The winner will face either Real Madrid or Liverpool. Madrid beat Liverpool 3-1 at home in their first leg on Tuesday.

After eliminating Cristiano Ronaldo’s Juventus in the round of 16, Porto entered the last eight looking to upset another top European team. Chelsea were playing in the last eight for the second time since winning the European title in 2012. They last made it to the semi-finals in 2014, losing to Atletico Madrid.

Porto were a quarter-finalist in 2019, losing to eventual champion Liverpool. They are trying to make it to the semi-finals for the first time since winning the competition in 2004.