A sore point for Maurizio Sarri: Chelsea boss frustrated by the way his team failed to play their own game against Manchester United

Post-match press conferences adopt a formula where positives are prised from even the most cataclysmic performances.

So when you’ve been on the brink of losing your unbeaten record in the Premier League, when the man about to wrest the points from you is a predecessor, the most successful, most iconic manager this club has had, it should have been an easy task to accentuate the positive.

But not for Maurizio Sarri. He wasn’t taking that easy route. In his view, the team had played badly for a significant chunk of the game and no amount of last-minute drama, complete with a tunnel altercation, could hide the fact. 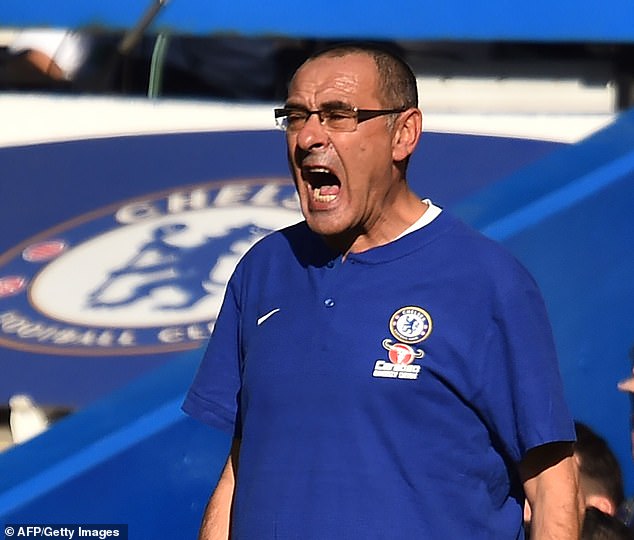 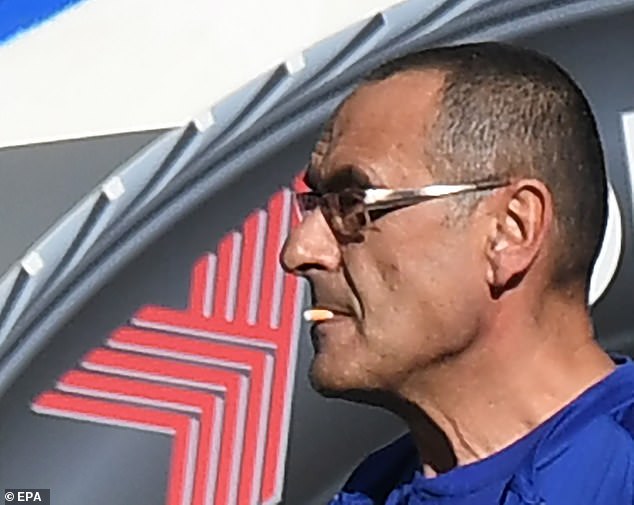 ‘In the end I am really disappointed in the last 30 minutes,’ he said. ‘The equaliser in the last minute is OK, is OK for the confidence of the players. But I have to look at something else.’

Ah, but the ‘character’ they showed, Maurizio?

‘Yes, but they have to play my football with character!’ he insisted.He smiled and promised that he wouldn’t be telling the players off, as such, though he would be spending around four hours reviewing the tape to see what went wrong. Even if they’re not severely admonished, Chelsea players can expect to learn where they erred on Monday morning.

‘Then after the goal for 1-1 we haven’t played our football; only the long ball.

‘We are not organised to go for the second ball. In this kind of football, United is better than us.

‘After the 1-1 we stopped with our football and we have played another football with the long ball. I don’t want to go to second ball. I want to play with short passes. I don’t know why it happened. If I did I would have immediately changed the situation!’ This is the theoretician’s approach: a 3-0 win wouldn’t necessarily be a good thing if the template had not been followed.

So for all David Luiz’s header and Ross Barkley’s determination to squeeze the ball in and the euphoria surrounding Stamford Bridge, Sarri was unimpressed. 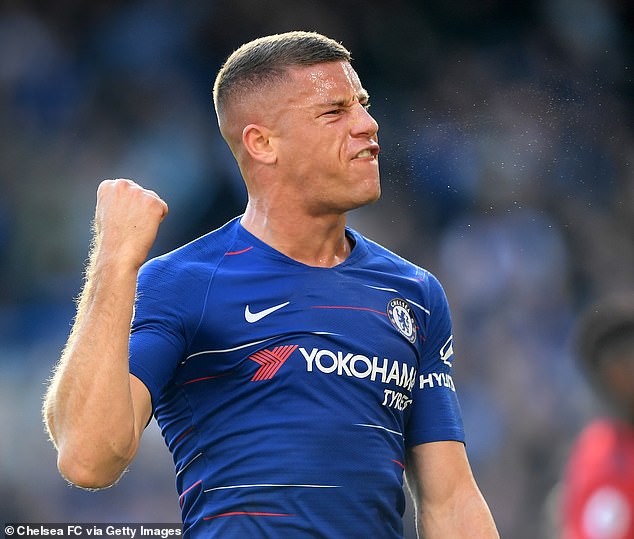 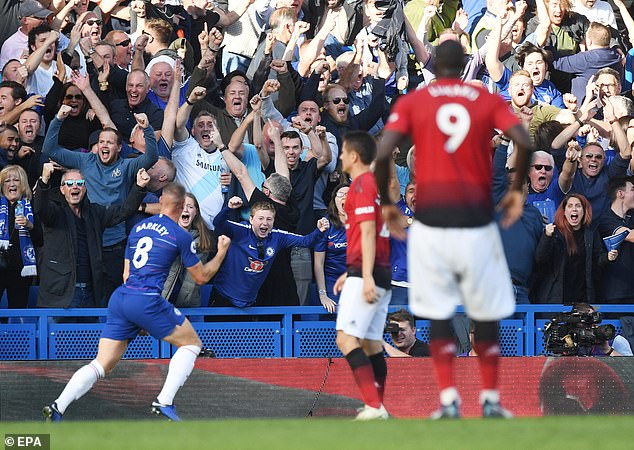 All was forgotten in pursuit of the perfect. He did acknowledge that against a worse side they might have got away with it.

‘We played against a fantastic team,’ he said. ‘If you make mistakes, they are clear. Sometimes we have made the same mistakes but against other opponents it wasn’t clear.’

But that wasn’t the point. He was right in that his wasn’t vintage Sarri-ball. When they were on the front foot, when they pressed high, as they did for much of the first half, they were the protagonists in a way we don’t associate with the Chelsea of the modern era.

We have seen dominant teams, wonderful players and a roll call of great managers, from Mourinho himself, to Carlo Ancelotti and Antonio Conte. Ancelotti’s was probably the most idealistic.

His team’s 103 goals was only bettered last season by the irrepressible Manchester City. But he still was never quite as consistently gung-ho as Sarri’s team, even if they are only on course to score 84 goals at present, which is round about the same rate as Antonio Conte’s title winners. They are scoring significantly quicker than Mourinho’s Chelsea’s team. And that was Mourinho at his peak, back in 2005 and 2006. Then he was the hippest, coolest young coach in world football and with Arjen Robben and Damien Duff there was panache aplenty.

But even then it was primarily built upon solidity and it was the fact that they only conceded 15 goals in that first Mourinho season in 2004-05 which was the most significant statistic. They scored 72. 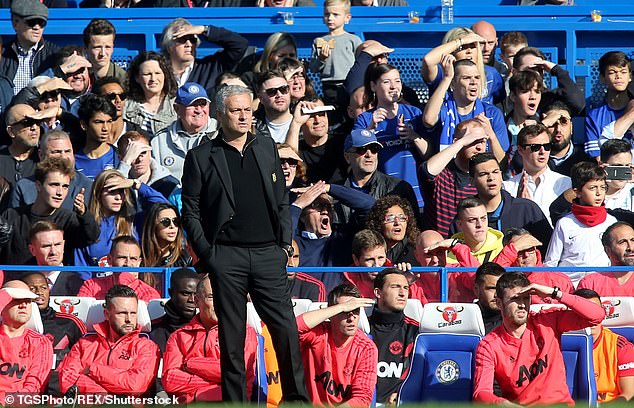 Manchester United manager Jose Mourinho, pictured dressed all in black, had a point to prove 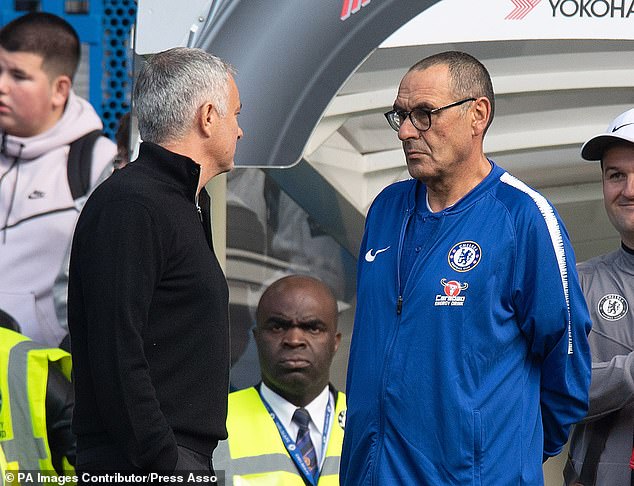 Yet another statistic, more tangible was surpassed on Saturday. When Mourinho began at Chelsea he went eight Premier League games unbeaten before losing to Manchester City in mid-October. It looked like Sarri would suffer a similar fate, until Barkley popped up with that late equaliser. That extended Chelsea’s unbeaten run to nine games, thus improving on Mourinho’ start at the club.

It’s only a minor landmark. Mourinho’s start always seemed to lay down a foundation for a title win whereas, even if this point put them on top of the table for a few hours, it feels as if Sarri’s Chelsea have to run at full speed just to keep up with Manchester City and Liverpool, who have yet to find their full stride.

But there is an identity developing at Chelsea even if, as Sarri acknowledges, it hasn’t yet been fully embraced. When they get it right, it is a thing of beauty. Eden Hazard only really got away on a few occasions here.

That was partly because of the heavy rotation of fouls being committed on him, with both Ashley Young and Nemanja Matic eventually earning yellow cards. But when he is dashing at defenders, N’Golo Kante and Willian supporting, there is a freedom to their play.

If you wanted to quibble with Sarri it would be over his selection of Alvaro Morata over Olivier Giroud, who looks like Hazard’s preferred choice of striker. Morata looks drained of all zest where all around him other Chelsea players have been re-energised by Sarri.

And good though United were —and the second-half performance was perhaps their best of the season — you look at their young players, like Marcus Rashford and Anthony Martial, and wonder how they would respond to a manager like Sarri. 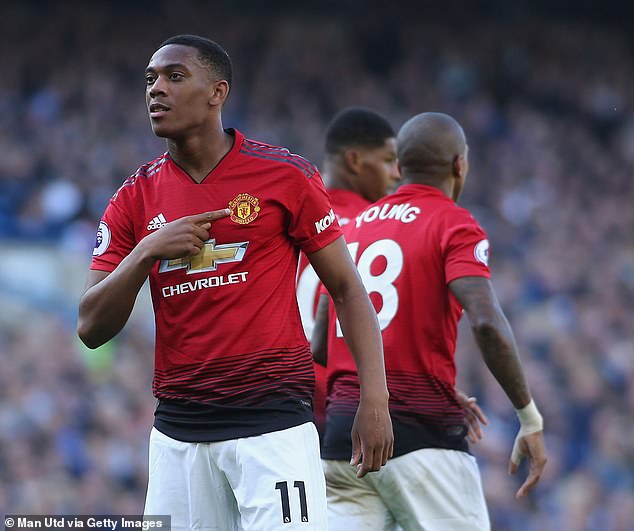 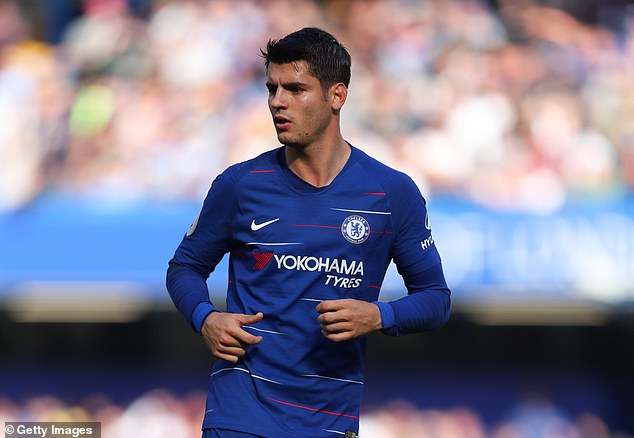 Rashford played well here and Mourinho schools him like a pro. So, out of possession, you can watch him look and check, look and check.Every other second, he wanted to know where Marco Alonso was and would check his position. It’s part of the job.

But there isn’t the same sense of liberation. When United got on the front foot, once they had equalised, their energy and aggression was something to behold.

But that is Sarri’s default position, not an optional extra that comes at a later stage of the game. Taking the initiative suits young players; it embraces their natural philosophy.

And it’s not a question of age: Sarri is 59. But he wants to be on the front foot and was aghast that he wasn’t in those final 30 minutes.

Mourinho raised his three fingers as he stalked off the pitch to indicate the league titles he accumulated while at this club. And Sarri is unlikely ever to match Mourinho in substance here.

But in terms of style, he could easily achieve more. It didn’t come on Saturday. But the fact that so irked him demonstrates that this could be a season to remember.