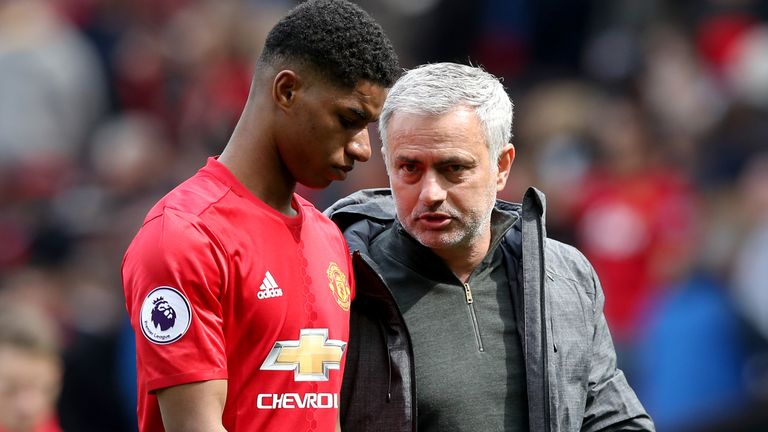 Marcus Rashford has revealed how a talk from former Manchester United manager Jose Mourinho helped him become more “savvy” in the penalty area.

After watching Liverpool’s 1-0 defeat at Southampton, where he felt striker Sadio Mane should have been awarded a spot-kick, Liverpool manager Jurgen Klopp said United had been given “more penalties in two years than I had in five-and-a-half years” in charge.

Asked why United might be perceived to getting more than their fair share of penalties, Rashford says he believes much of it is down to an attack-minded squad always looking to be on the front foot, as well as being able to maximise any opportunities.

“As a forward line, we want to go and score goals,” Rashford said in an interview with Football Writers’ Association.

“When you are making runs in behind or you are dribbling with the ball and if you see a challenge coming, you don’t want to get tackled because you are looking at an opportunity to score a goal.

“There is no way you are going to let somebody take the ball off you, so for me it is just a case of us wanting to score goals and the teams wanting to defend goals – and you know, penalties can happen.”

Rashford continued: “But there have been times when we have probably not got penalties.

“I remember when Jose (Mourinho) was manager, there were five or six times I can remember where I should have had a penalty.

“Jose ended up saying to me: ‘if you are not savvy about the way you do it, then you are not going to (get) give(n) it.’ After that, we started to get a few penalties.

“It was something that in terms of development you have to learn that and understand it.”

Rashford believes the connection he has established Anthony Martial and Bruno Fernandes make United “more dangerous” as they go in search of silverware this season.

The trio have been at the forefront of the club’s rise up the Premier League in recent weeks, with United leapfrogging defending champions Liverpool to the top of the table after Tuesday’s 1-0 victory at Burnley.

Rashford feels there is even more to come from himself, Martial and Fernandes as an attacking force.

“Ultimately we are more dangerous, we can score goals at any time, but we can do much better,” the 23-year-old said.

“I believe it is still the start of something which can go on to be an unbelievable connection.

“The forward line in general which we have – we can play in so many different ways, in different positions with different personnel.

“We can just be so strong and for us, that is what is key because if we want to win trophies and win the leagues, then you need versatility.

“I believe that we have one of the most versatile squads probably in the Premier League, especially going forwards.

“It is exciting, but it is the beginning of something, we want to keep progressing and keep improving.”

United’s title credentials are set to come under the microscope when they travel to Anfield on Sunday afternoon.

It has been nearly four years since Liverpool lost a league game at home – in April 2017 against Crystal Palace – while United have won just one of their last 10 matches against one of their fiercest rivals.

“They are hard to beat at home, for us to beat them we are going to have to be at our best, it is as simple as that, really,” Rashford said.

“Liverpool and (Manchester) City, there are no better games. As a kid from Manchester that supports United, there are no bigger games to score goals in. It is definitely a game I am looking forward to, like the rest of the squad.

“We are a team which is still improving, we are in a good run of form, so we have to just try to keep focusing on ourselves and do the best we can do. As long as we do that, you walk off the pitch with no regrets.”

Rashford, who has scored 14 times in 28 games in all competitions this season, was in United’s youth set-up when the senior side won their most recent league title under the outgoing Sir Alex Ferguson in 2012-13.

United have endured mixed fortunes since then without coming close to ending their league drought post-Ferguson, but Rashford is adamant they are well equipped to do so under Ole Gunnar Solskjaer.

“We are more ready now than we were two years ago in terms of leaders on the pitch and ready to fight for trophies, but still we need to get our hands on those trophies,” Rashford said.

“We are (still) in the FA Cup and (have) the Premier League left, so we have to try to go and win both trophies, and just do our best to continue improving.

“But the main aim is to win trophies, as it always has been at this club.”