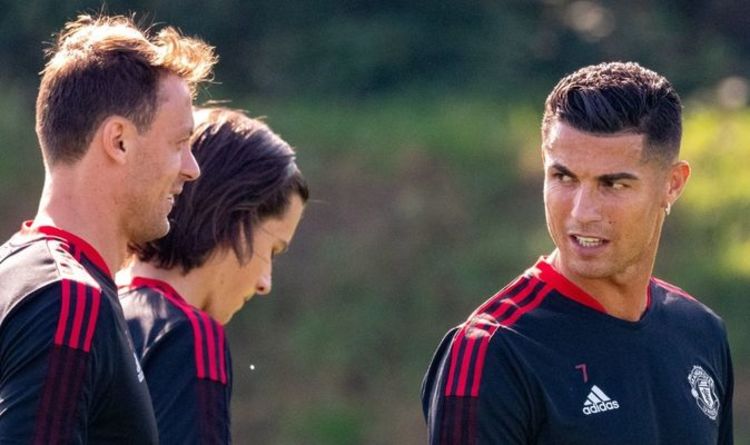 Cristiano Ronaldo is a Manchester United player once again and while several of his new team-mates may now be concerned about their place in the side, his return spells great news for three of his colleagues, two of whom he already knows well. The 36-year-old veteran is expected to make his presence felt in the dressing room while setting an example on the training field as he looks to help drive the group to new heights.

Ronaldo’s world-class skill-set and extraordinary mindset and mentality could prove to be the final piece of the jigsaw for Ole Gunnar Solskjaer in his quest for trophies.

United are yet to deliver a Premier League title in the post-Sir Alex Ferguson era and now Ronaldo will want to put that dismal run to bed.

He won’t be a one-man band though of course and CR7 will need his team-mates to step up and show their quality as United target success on all fronts.

JUST IN: Manchester United can kill two birds with one stone with £54m Nemanja Matic replacement

It goes without saying that Bruno Fernandes will be over the moon to welcome his compatriot to Old Trafford.

The night before the deal was official, Fernandes and Ronaldo began to exchange texts about the prospect of linking up at club level and the attacking midfielder is understood to have played a role in making it happen, behind the scenes.

Both share the same vision when football is concerned and know what it takes to win. That is what the pair will now aspire to achieve at United.

Fernandes and Ronaldo helped Portugal build on the Euro 2016 triumph by winning the inaugural Nations League in 2019 and while the 2018 World Cup and Euro 2020 didn’t go to plan, the duo are still trying to drive the national team to new heights.

Don’t be surprised if Fernandes’ assist tally skyrockets with Ronaldo in the side, although he may now have a fight to take free-kicks and penalties.

Nonetheless, Fernandes will want to win trophies at United and with Ronaldo in the side, that is undoubtedly more achievable.

These two now feel like the core of Ole Gunnar Solskjaer’s side and together, they make United a serious force to be reckoned with.

Ronaldo and his friend Raphael Varane know each other very well from their time in Madrid, where they won four Champions League trophies together.

Now Varane is not making the transition and adaptation to new surroundings at United all by himself and he will immediately feel more at home when sharing the dressing room and training pitch with CR7.

After enduring a challenging time post-Ronaldo at Real Madrid, Varane wants to help United regain their stranglehold on English football.

The arrival of the pair will have already had a huge impact behind the scenes at Carrington, lifting the group after last season’s frustration of another trophy-less campaign.

Solskjaer has now recruited two elite, world-class players who already know how to win the biggest prizes in the game.

Varane will now have an extra spring in his step with Ronaldo alongside him and the ex-Real Madrid duo will be ready to hit the ground running in their new colours.

There is nobody better for Greenwood to learn from on the training pitch day-in-day-out than Ronaldo, who already knows what it takes to be a huge success at United.

Greenwood is still a raw talent with bundles of natural ability but he knows he’ll have to be on his A game to play alongside Ronaldo in attack.

That will only help elevate him to new heights while he can absorb and learn new things from CR7 on a daily basis as well as utilising his knowledge and advice.

Ronaldo’s return comes at the perfect time for Greenwood, who now has the perfect role model to look up to at United.

His arrival back at Old Trafford should not be perceived as a negative when Greenwood is concerned because he is simply still good enough to play and feature every week.

Instead, this feels like a move that will only benefit the youngster, who is destined to become one of the most fearsome forwards in world football in years to come.