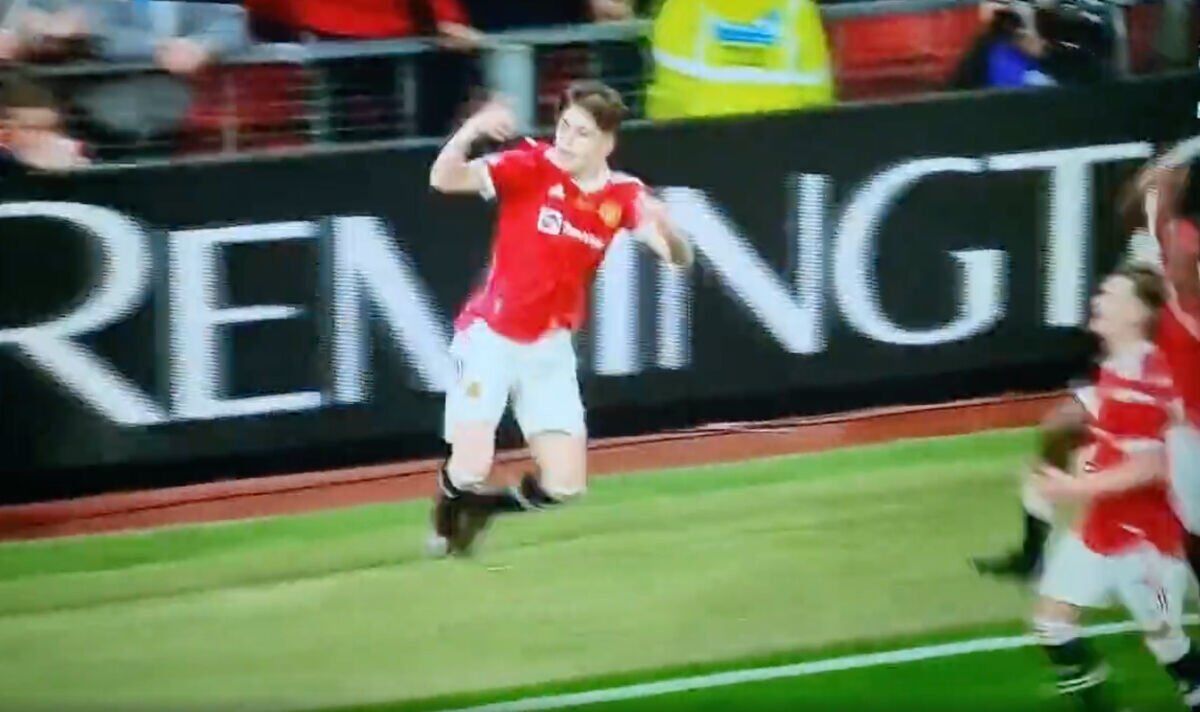 Alejandro Garnacho is the name on the lips of every excited Manchester United fan and the youngster proved the hype is justified with two goals in the FA Youth Cup final. The teenager celebrated in style, copying the celebration of his idol Cristiano Ronaldo after getting on the scoresheet.

Garnacho scored twice in another sublime display and it was his effort from the penalty spot that put the young Red Devils 2-1 up against Nottingham Forest to clinch the crown. And the Spanish-Argentine youngster proceeded to imitate Ronaldo’s famous ‘siuu’ celebration to mark the occasion in front of the Old Trafford faithful.

He ran towards the corner flag in front of the 60,000-strong crowd and leapt into the air, doing a 180-degree turn before bringing his arms down to his side as his team-mates crowded him. He then celebrated with the Argentina flag at the final whistled after doubling his tally.

It is no surprise that Garnacho chose to replicate Ronaldo’s favoured choreography when he scores a goal after his recent social media post worshipping the Portuguese superstar. He recently posted a tweet swooning over his hero after being invited to train with the senior squad and was pictured alongside Ronaldo, who is 20 years his senior.

And the teenager could not resist marking the occasion with an Instagram post about the Portuguese superstar after linking up with him at Old Trafford, reigniting the ‘GOAT’ debate by writing the caption: “Greatest of all times…”, alongside goat, fire, football and heart emojis.

The 17-year-old has since emerged as a possible star for the future with United after breaking into the first-team under Ralf Rangnick. Garnacho was also named United’s Under-18 Player of the Year before the game and produced another impressive display to show his ability in the Youth Cup final as Manchester United lifted the trophy for the first time since 2010-11.

The promising attacker made his debut against Chelsea in April and has since been involved in several matchday squads. And after working with the midfielder, Rangnick has backed as a star for the future.

“[Garnacho] has been training with us [the first team] for the last two weeks and I know that he is one of the most promising players,” the German said. “[He is] still only 17, but a player that hopefully if he keeps his feet on the ground. If he keeps trying to get better every day, then he will not only be sitting on the bench but there is every chance he will be playing for this club.”

It is not yet known whether Garnacho, who arrived from Atletico Madrid in 2019, will continue to be given chances in the first-team under incoming boss Erik ten Hag. But he will only do his chances a world of good by continuing to impress with performances of his current level.