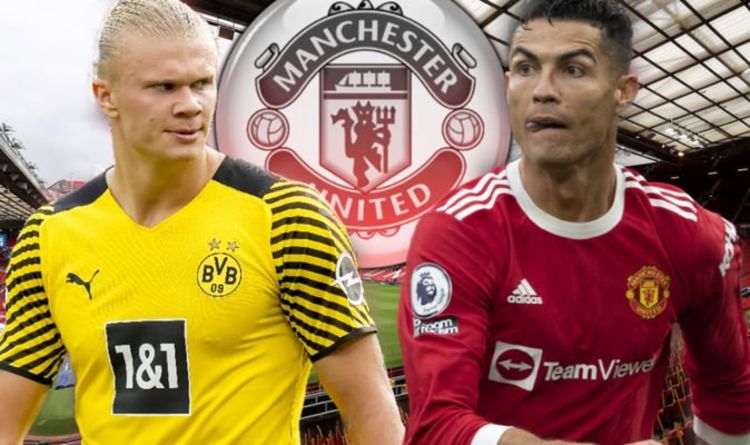 Lingard thrilled to have Ronaldo back at Man Utd

Manchester United know who they want their next long-term No 9 to be – but their plans could put an end to Cristiano Ronaldo’s apparent transfer wish if they come to fruition.

The Red Devils have improved their squad significantly in recent windows but with their two most-used strikers both in their mid-to-late 30s, they are looking to the future.

Edinson Cavani is expected to leave next summer upon the expiry of his current contract while Cristiano Ronaldo will turn 37 in February and so is not the answer for too much longer himself.

Borussia Dortmund’s Erling Haaland is one player the club’s hierarchy are agreed should be their top target in the position.

The Norwegian is being eyed to come in next summer when he will be available at a bargain price of around £64million due to a release clause in his contract.

The Manchester Evening News reported back in August that there is an internal agreement at Old Trafford between manager Ole Gunnar Solskjaer and football director John Murtough about the 21-year-old.

The pair are both thought to believe Leeds-born Haaland, who worked under Solskjaer at Molde previously, is the ideal option to strengthen United’s centre-forward ranks for the foreseeable future.

Yet United beating the likes of Manchester City and Real Madrid to the signing of Haaland would surely oust Ronaldo’s apparent hopes of another different deal.

The Portuguese is claimed by Calciomercato to want United to recruit his former Juventus team-mate Federico Chiesa, who has grown into an integral player for the Turin giants.

The versatile Chiesa is still only 23 but delivered 15 goals and 11 assists in 46 games last term and has a pair of goals to his name this season, scoring the only strike in Juve’s Champions League win over Chelsea.

The Italian heavyweights consider the Chelsea and Liverpool-linked Italy international, a Euro 2020 winner against England, untouchable and therefore any deal would be extremely difficult and expensive to do.

And even if a deal was more straightforward, although Chiesa can play centrally he is primarily a wide forward and United already have an abundance of players in those positions.

Even if Cavani and the likes of Jesse Lingard and Juan Mata – out of contract in 2022 – depart, United still then have Marcus Rashford, Jadon Sancho, Mason Greenwood and Anthony Martial as senior players capable of starting in those areas.

Paul Pogba, if he stays, has also shone out on the left too while Amad, Anthony Elanga, Shola Shoretire and Facundo Pellistri are promising young options who all primarily operate out on the flanks.

Instead it is centre-forward that is the bigger priority and were United to land Haaland, whose arrival would require wages not far off of Ronaldo’s £500,000-a-week salary as well as huge agents fees, they surely would not have the money to sign Chiesa as well.

In fact even if Martial was sold and Pogba was to leave for free when his contract runs out, both of which would free up finances, United still have other priorities that mean Chiesa is an unlikely target.

In addition to a new striker, defensive midfield is an area of pressing concern for United with West Ham’s Declan Rice – rated at as much as £100m – and Leeds United’s Kalvin Phillips among their options to fill the vacancy.

Chiesa to United therefore appears highly unlikely, unless the Red Devils miss out on Haaland and view the Italian as a valuable plan B, which doesn’t look likely given the profile of striker Solskjaer likes to play with.

And that means Ronaldo’s wish to join forces with Chiesa once more is likely to go unfulfilled. How he reacts to that news, particularly if Haaland also comes in to usurp him as the club’s go-to starting striker, remains to be seen.