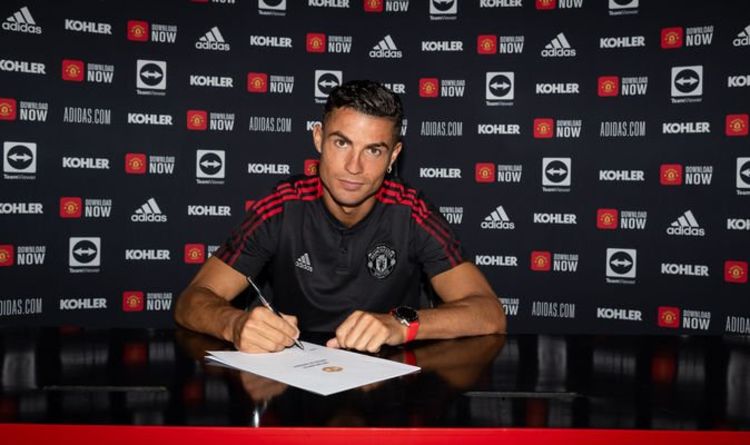 Cristiano Ronaldo’s move from Juventus to Manchester United has already seriously benefitted the Old Trafford outfit after it emerged that shirt sales for the Portuguese superstar had reached an estimated £187million.

In arguably the most anticipated transfer since Ronaldo joined Juventus for £88million in 2018, his shock move back to United has meant that replica shirts all over the world are being sought after to commemorate the return of their hero.

Ronaldo played for United from 2003 to 2009, winning three Premier League titles, three FA Cup winners medals and a Champions League in his time in the north west of England.

And as fans look forward to the return of their once-heralded superstar, shirts are flying off the shelves as a result.

Just under 76,000 fans will be crammed into Old Trafford to see his return.

And with the game not being televised, tickets are being sold at a reported £2,500.

Many of the 76,000 will be wearing Ronaldo shirts – and according to Lovethesales.com, Ronaldo has the fastest-selling shirt in Premier League history.

Zlatan Ibrahimovic reportedly gained around £75m in shirt sales for the Red Devils upon his arrival in 2016.

However, Ronaldo’s £187m blows that deal out of the water, doubling it and then some as fans across the world look to cherish the transfer.

Of course, United don’t receive that entire sum. The Premier League club are entitled to around 7 per cent of that, which means that £13.1m has been pumped into their coffers.

And with Ronaldo costing an initial £12.9m with the fee due to rise to £20m, it has already covered his wage in just under a month.

Ronaldo had a competitive rivalry with other global superstar Lionel Messi in his time at Real Madrid.

The pair were by far and away the best two players in the world as they competed for the La Liga title for nine seasons.

However with Messi only raking in £103.8m in shirt sales following his move to Paris Saint-Germain, it is fair to say Ronaldo has won the that battle.

Stuart McClure, founder of Lovethesales.com, has said there is now a shortage of ‘Ronaldo 7’ shirts following high demand.

“Online searches for the ‘Ronaldo 7’ shirt have increased by over 600%, compared to last summer,” McClure said.

“This is proving to be the signing of the summer for Manchester United. Not only has Ronaldo smashed the record for the fastest selling shirt in Premier League history but has netted Man United £13.1m in shirt sale revenue.”