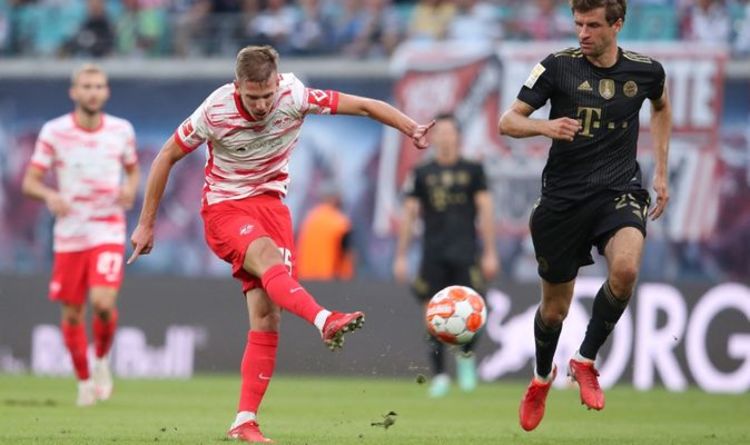 Manchester United may have a secret weapon to beat Barcelona to the signing of £60m Dani Olmo. Ole Gunnar Solskjaer’s side are reportedly keen on the RB Leipzig attacker after Barca failed to sign him on the final day of the transfer window, with Juventus and Bayern Munich also interested.

Barcelona turned their attention to Olmo on transfer deadline day after it became clear Antoine Griezmann was returning to Atletico Madrid, according to Marca.

The Spanish publication says Olmo was eager to return to the club he joined as a youngster, but Leipzig were unwilling to sell as they did not have enough time to bring in a replacement.

Barca are expected to renew their interest in him when the transfer window reopens, with the La Liga giants weighing up a £60million bid.

But they could face competition, wth United, Juve and Bayern also said to be monitoring the 23-year-old.

And United could have an ace up their sleeve, as the Premier League side have a player who Olmo hailed as a “role model”.

Olmo made the comment to Juan Mata last year as the Spanish internationals prepared to face off in the Champions League.

While Mata is 10 years older, there are parallels between the compatriots’ careers – and not just because they play in the same position.

Both players made brave moves to further their careers at a young age, with Mata having left Real Madrid for Valencia, while Olmo departed Barcelona for Dinamo Zagreb before joining Leipzig last year.

Both became European Under-21 champions, while Olmo played at the Olympics and the Euros this summer – just as Mata did in 2012.

In a Zoom call between Olmo and Mata for The Guardian ahead of their Champions League meeting last year, the Leipzig man said: “I went to Croatia at 16, thinking that was the best way to progress.

“Yes, it’s hard but in the first few years my mum went with me and I was always clear what I wanted to be.

“I am where I am now, at Leipzig and in the national team, because I went there then. I see Juan as a role model.”

Olmo joked that Mata was making him “blush” as the United man hailed his countryman and spoke of his pride at the way his career was progressing.

“I look at Dani with pride and I have a lot of hope for him,” said Mata.

“The level he’s at, he’s already in the national team, and he’s someone I enjoy watching play.

“It’s very hard to play against him, as we saw at Old Trafford: he assists, he scores, he combines well, has vision, he’s very complete. And I’m sure he hasn’t reached his ceiling yet.”

United announced their intent to return to the top at the weekend as Cristiano Ronaldo starred with two goals in a 4-1 thrashing of Newcastle.

With Ronaldo’s form looking likely to push the Red Devils up a level or two, Olmo would have a big decision to make on whether to join his hero Mata if the Premier League club came calling for him.