‘I am at the best club in the world’: Manchester United goalkeeper Sergio Romero admits ‘it’s not easy’ playing second fiddle to David de Gea but is ready to take chance when it comes

Manchester United goalkeeper Sergio Romero has acknowledged that being a back-up is ‘not easy’ but is ready to come in to play at the ‘best club in the world.’

The Argentinian has been the understudy to No. 1 keeper David de Gea since arriving at the club four years ago, and his five appearances so far this season have come in the Europa League and Carabao Cup.

Romero, who played throughout United’s run to the Europa League trophy in 2017, is likely to feature from the start in Thursday’s clash with AZ Alkmaar and has admitted he has found it difficult sitting on the bench. 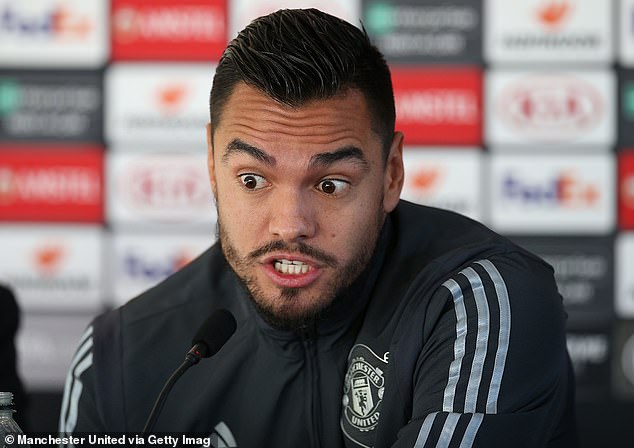 ‘It’s not easy. But I work every day for this chance to play and then I am ready when it comes,’ Romero said on Wednesday.

‘In the last four years, I was in a difficult situation. I work every day for the chance and if I have my chance I try to do my best.

‘I work hard and I am at the best club in the world. I said I wanted to play for United one day when I was younger and now I worked to get my chance.

‘It was never the intention to be second choice.’