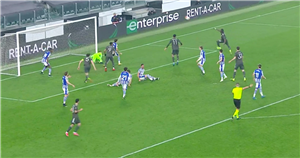 Manchester United made light work of their Europa League first leg with Real Sociedad, taking a 4-0 lead back to Old Trafford for the return fixture.

Goals from Bruno Fernandes (2), Marcus Rashford and Daniel James have all but ensured the Red Devils’ progression into the next stage of the competition, barring a remarkable second leg turnaround from Sociedad.

Fernandes caught the eye once more with a dazzling display, Amad Diallo earned his first-team debut and Eric Bailly produced another memorable moment in a United shirt.

With Ole Gunnar Solskjaer’s side three goals up in the contest, the Ivorian defender attempted an acrobatic effort inside the penalty area after Harry Maguire saw his headed effort parried by goalkeeper Alejandro Remiro.

Bailly’s ambitious piece of skill did not go according to plan as he failed to make a true connection and sent the ball out of play for a goal-kick.

United fans saw the funny side to this miss as the 26-year-old reinforced his cult hero status among the club fanbase.

“I love how he just gets up straight afterwards like it was nothing”, shared one supporter on Reddit when discussing the shot.

Further messages of support flooded in, as other users delivered their verdict on the United defender.

"No one plays the game quite like Eric Bailly.”

Blighted by injuries for much of his United career, supporters have rarely seen the former Villareal man string together a run of games within the side.

Bailly has featured in only seven Premier League matches this campaign having sustained further setbacks which have ruled him out of action.